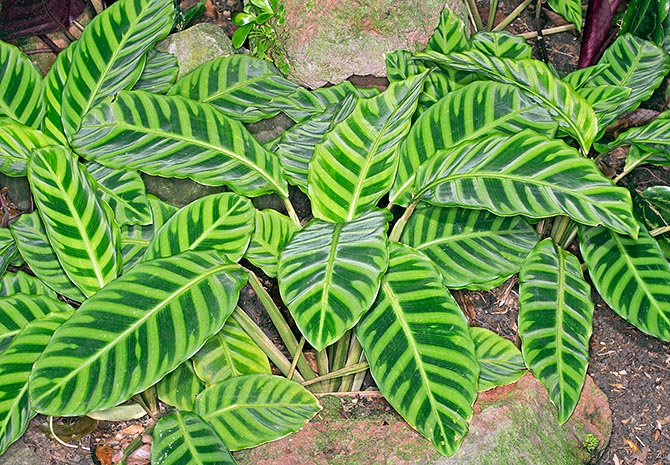 The genus is honoured to the German botanist and paleontologist Johann Heinrich Robert Goeppert (1800-1884); the name of the species comes from the Latin “zebrina” = of zebra, with obvious reference.

The Goeppertia zebrina (Sims) Nees (1831) is an evergreen, perennial rhizomatous herbaceous species, forming thick tufts up to about 1 m tall. The leaves, on an about 30 cm long petiole, are simple, oblong to elliptic with pointed apex, 40-60 cm long and 15-20 cm broad, emerald green with dark green stripes starting from the central nervation above, slightly suffused of violaceous purple below. 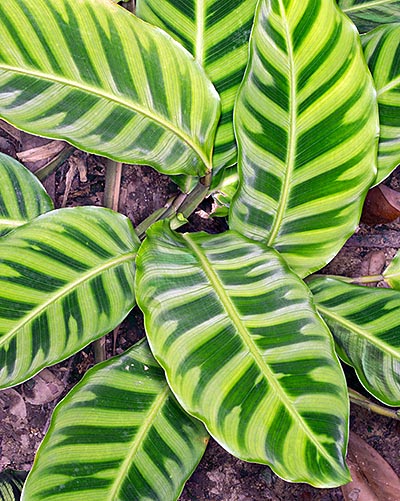 The fruits are capsules containing three oblong trigonal seeds. It reproduces usually and easily by division in late spring.

It is one of the most ornamental and most appreciated species of the genus due to the velvety look of the foliage and the intense colouration, vigorous and fast-growing in its natural habitat, it is cultivable in the tropical and humid subtropical climate zones where it requires a shaded position or semi-shaded, as the direct rays of the sun can seriously damage the foliage, on soils rich of organic substance, well drained, aerated, kept humid.

It requires protection from the wind, high humidity, 70-80%, and constant temperatures, ideal 20-25 °C. It can be utilized as groundcover in zones with thick trees, in flowerbeds or in mass in particularly shady areas.

In pot, for even little luminous interiors decoration, it requires an organic loam with addition of siliceous sand or perlite per a 30%, to improve the drainage, and fragments of charcoal, is to be placed far away from air currents, in a location with constant temperature not lower than 16 °C.

The watering must be regular, in way to keep the substratum constantly humid, but without stagnations which can cause fatal rottenness, preferably using rain water, by reverse osmosis or demineralised at ambient temperature.

It is fundamental, for a luxuriant foliage, a high and constant ambient humidity, difficult to obtain in an apartment, for increasing it we can place the pot on a tray with gravel or other inert constantly kept humid and make frequent nebulisations with non calcareous water for avoiding unaestethic spots on the leaves; in conditions of insufficient humidity the margins of the leaves easily blacken. The fertilizations, duly distributed and alternated, in way to avoid salts accumulations to the roots, must be done during the vegetative period with hydro-soluble balanced products, with microelements, at ¼ of the dosage suggested on the package. It can be subjected to attacks by mites and cochineals to be fought with specific products.