Golden hamster: hamsters do not exist in nature

Friendly, lively and intelligent, the Golden Hamster has mysterious origins and is a favourite with children. How to keep it in the home. 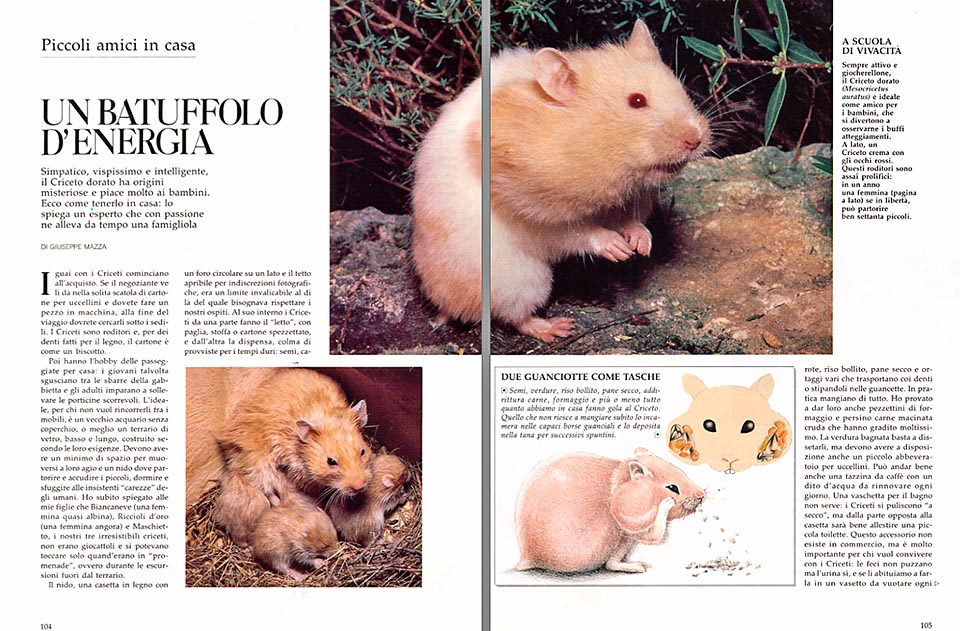 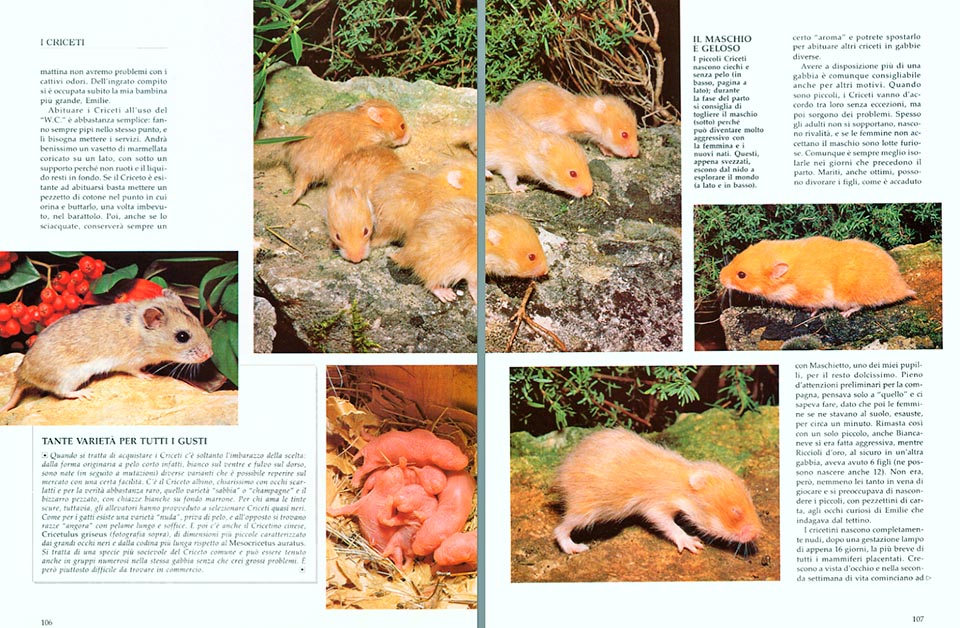 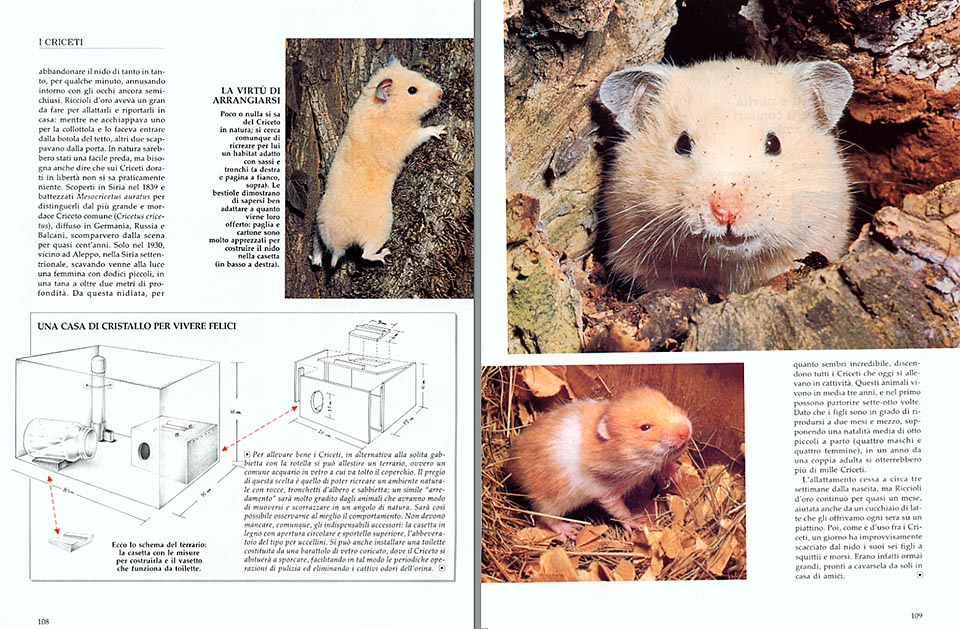 Problems with hamsters start from the beginning.

If the dealer gives them to you in the usual carton box for small birds, and you have to drive for a while, you can be sure that at the end of your way, you will have to look for them under the seats.

They are rodents, and for teeth done for the wood, carton is like a biscuit. Then, they have the hobby of evasions. Even if, practically, they would live in a restricted area, they don’t like to stay confined in a cage: young slip away passing through the bars, and the adults learn immediately how to heave up the gliding small doors.

The best thing, for those who don’t want to chase them among the furniture, is an old aquarium without cover, or better, a low and long soil container in glass, built keeping in mind their needs.

They must have a minimum of room for their night walks and a “nest”, where to bring forth, sleep, and stay away from the insistent “caresses” of humans.

I have, at once, explained to my daughters that Snow White (a female almost albino), Golden Curls (an Angora female), and Little Boy, our three irresistible hamsters, were not toys and that they could be touched only when they were in “promenade”.

The “nest”, a tiny wooden house with a round hole on a side, and an opening roof for photographic indiscretions, was “off limit”, beyond which our guests had to be respected.

In the interior, on a side, they build up the “bed”, with straw, pieces of cloth, or smashed paper (not from newspapers!), and on the other side, the “pantry”, full of provisions for hard times: seeds, carrots, boiled rice, dry bread, and various vegetables, which they carry with their teeth, or carry inside their cheeks.

Practically, they are omnivorous. I have tried to give them also small pieces of cheese and even crushed raw meat, which they did appreciate very much. Wet vegetables are sufficient for quenching their thirst, but they must available also a small laboratory water pool of a pool for small birds, also a coffee-cup can be OK, with some water to be renewed on a daily basis.

A “bath-tub”, is not necessary, hamsters “dry clean” themselves, but in the opposite side of their house, a toilet must be foreseen.

They do not exist in commerce, but it’s very important for he who wants to live with a hamster: the stools do not stink, but urine yes, and if we get them used to do it in a small pot, you will be able to pour out, every morning, also the smell. My eldest daughter, Emilie, has taken care of this thankless task, in exchange of the authorization to “graze them”, and I never had any more “problem” in my working room.

It’s rather easy to accustom hamsters to the toilet: they urinate always in the same place, and so you have just to place the toilets right there. A nice small pot of jam will be quite OK, laid down on a side, to which we shall stick a plait, in order it does not rotate and …. the liquid does remain on the bottom.

If the hamster hesitates in using it, it’s sufficient to place a small piece of cotton wool in the spot where they urinate, and then, to throw it, moistened, (with a small pincer), in the toilet. Later on, even if you wash it, it will always keep the “scent”, and you will be able to shift it to another cage to get other hamsters used.

To move it to another cage – you will say – but, one, is not enough?

When they are young, yes, but later on, problems arise. Often, adults do not bear others, rivalries stand out, and if the females refuse the male, then furious fights do take place.

In any case, it’s always better to isolate them during the days which precede the delivery. Husbands, even if very good, can eat their sons, as it has happened with Little Boy, an otherwise, very sweet hamster. Full of preliminary attentions with the partner, it was thinking only to “that thing”, and was very cute, seen that later on the females were remaining on the ground for about one minute, paralysed in obscene positions.

Left alone with only one young, White Star (so called due to a clear dot on the back), Snow White had become aggressive, whilst Golden Curls, safe in another cage, had got 6 sons (even 12 can come to birth). Also the last was not very keen to play, worried to hide them, under small pieces of paper, to the curious eyes of Emilie, who was ogling from the roof.

Young come to life naked, after a flashing gestation of only 16 days, the shortest of all placentate mammals. They grow up at sight, and during the second week of life, they start to abandon the nest, for some minutes, smelling around with still half-closed eyes.

Golden Curls was very busy in nursing them and taking them back home. While she was taking one by the nape, and was putting it in the house, through the trapdoor on the roof, other two were running away through the door.

In nature, they would be an easy prey, but we have to say that we know practically nothing about golden hamsters in liberty.

Discovered in Syria in 1839, and named Mesocricetus auratus, to distinguish them from the bigger, and biting, common hamster (Cricetus cricetus), spread out all over Germany, Russia, and Balkan area, they disappeared from the scene for almost a century. Only in 1930, not far from Aleppo, in northern Syria, while digging, a female with 12 young did appear, in a den, at more than 2 metres of depth.

From this brood descend, even if this looks incredible, all hamsters presently active.

They live for an average of three years, and during the first one, they may deliver 7-8 times. Seen that young are able to reproduce when 2 and a half years old, assuming an average birth-rate of 8 young per each delivery, (4 males and 4 females), in one year, from an adult couple, we might obtain more than 1.000 hamsters.

Nursing stops about weeks after birth, but Golden Curls continued for about one month, helped also by a spoon of milk we were offering, every evening, on a small dish. Then, as customary for hamsters, one day, it has suddenly sent away all six sons from the nest, with screams and bites. They ware now big enough, ready to manage by themselves, in a house of friends.

Golden hamster has transformed, during last decennia, in a real domestic animal. From the original specimen with short hair, white on the belly, and reddish on the back, have come, through mutations, several variations. Total albinism is rather uncommon, but there are frequently subjects with red eyes and clear fur (“sand” and “champagne” types), or white spotted.

On the contrary, through various shades of colours, we can find also black hamsters. As for cats, there is a “naked” type, without fur, and recently have become popular “Angora” hamsters, with a rather long hair.

Selections are up to now going on, and the story of breed hamsters is still to be written.

Golden hamster: hamsters do not exist in nature was last modified: May 22nd, 2019 by Giuseppe Mazza
error: Content is protected !!