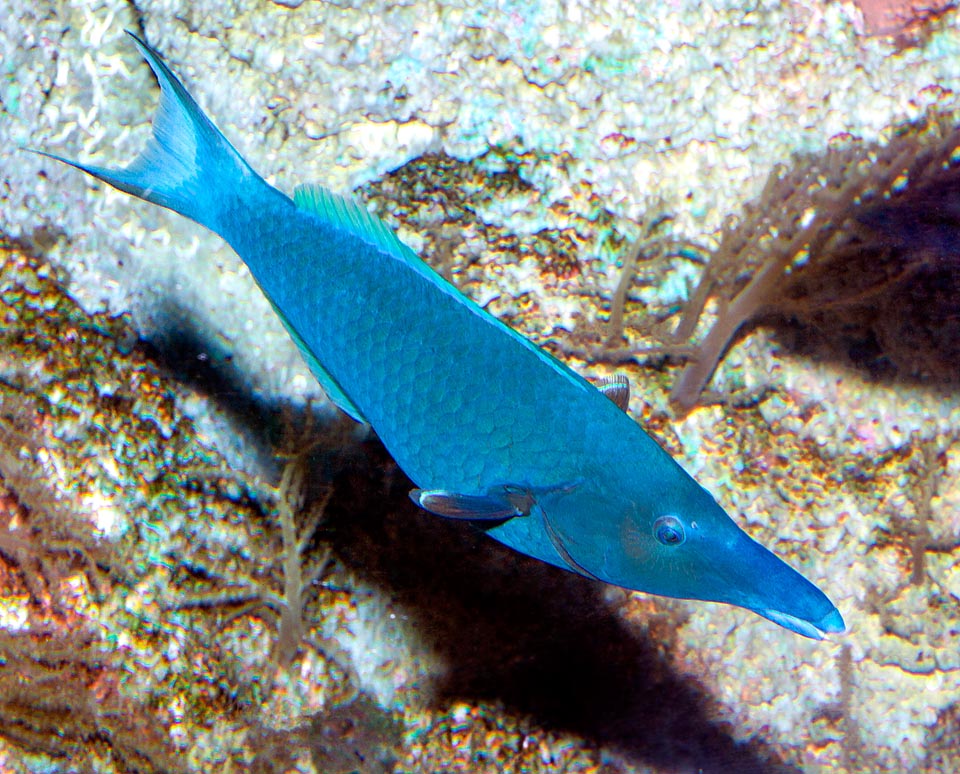 The Gomphosus caeruleus males, present in the Red Sea, and in the Indian Ocean up to the boundary with Pacific, can be 32 cm long © Giuseppe Mazza

The Green birdmouth wrasse (Gomphosus caeruleus Lacepède, 1801) belongs to the class of the Actinopterygii, the ray-finned fishes, to the order of the Perciformes, and to the vast family of the Labridae.

The name of the genus Gomphosus comes from the Greek “γονφοσ” (gomphos) = nail: because of the look of its snout, whilst the specific term caeruleus comes from the Latin “caelum” = sky, due to the blue colour of the males that recalls that of the sky.

It is present in the Red Sea and in the Indian Ocean up to the boundary with the Pacific. So, we find it along all African coast, from Somalia to South Africa, and then, indicatively, in India and furthermore up to Indonesia and the Philippines where it overlaps with the populations of the analogous Gomphosus varius. 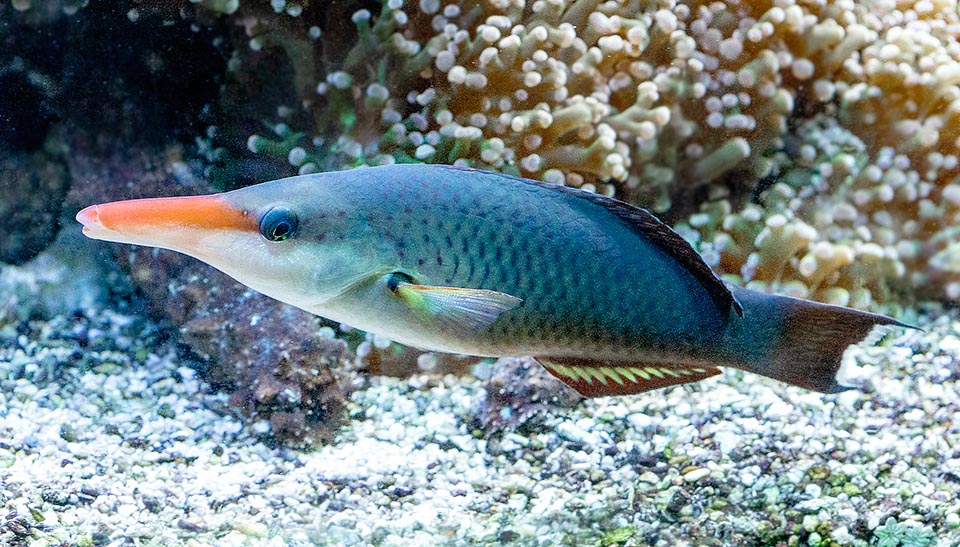 There is a strong sexual dimorphism and the females, much smaller, are protogynous hermaphrodite, so they can, growing, become males; this does not exclude the presence of diandric males, so such from birth, presenting when young a female livery. So, a puzzle for one who wants to determine the sex ‘at sight’ © Giuseppe Mazza

It lives solitary in relatively shallow waters, at 1-35 m of depth, frequenting lagoons, atolls but also rocky crags rich of the small invertebrates it eats and the outer side of the reefs.

There is a strong sexual dimorphism with males, much bigger than the females, reaching the 32 cm. The morphology is the same in both sexes: the body flattened laterally with the two jaws elongated in a beyond measure tubiform snout that has, it alone, about 1/7 of the total length, tail included. 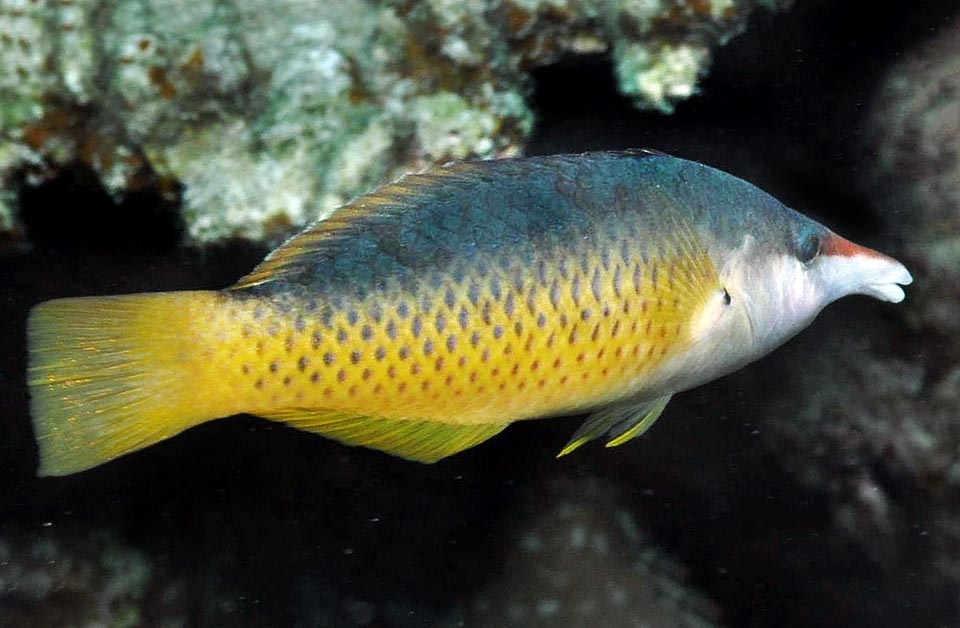 The Red Sea females display a quite different livery, so much that they had been talking of the subspecies Gomphosus caeruleus klunzingeri, now considered as a synonym © Rick Stuart-Smith, Reef Life Survey

The females have the body bluish grey and are recognizable at once from the upper part of the snout because of the characteristic brown-reddish V-shaped pattern starting from the eyes, relatively big with yellow irides. The pectoral fins are translucent with yellow rays, more evident at the base, surrounded in front by a black dot. The dorsal fin, with yellowish speckles in the first four hard rays, has the soft rays much longer that fall when growing on the side. The anal fin shows a series of showy oval yellow spots all over its length and this is an important distinguishing element with the young females of the Gomphosus varius that have them only in first third and are more roundish. 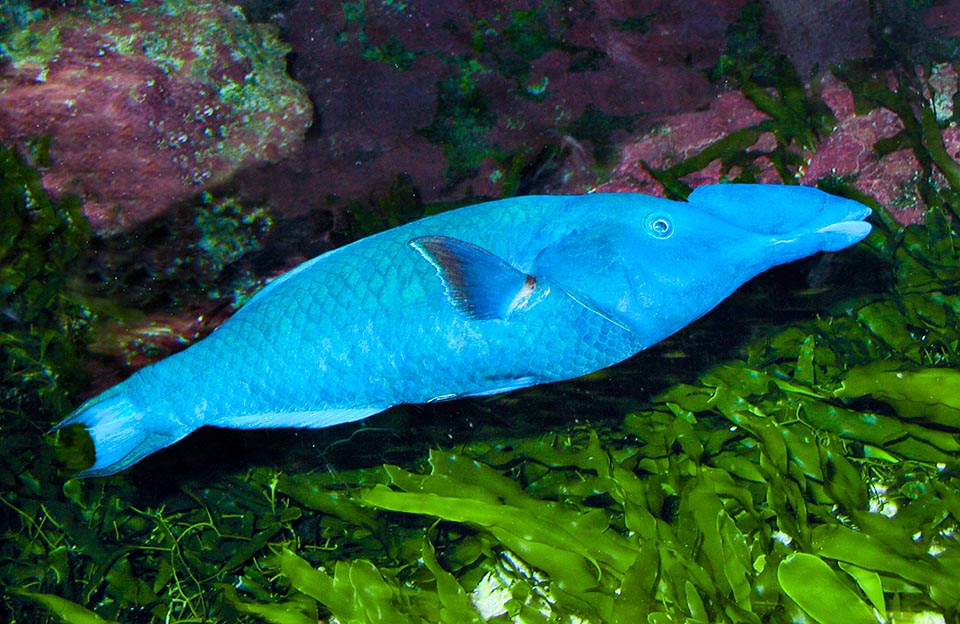 The cylindrical snout, formed by the elongation of the jaws to find the preys among the corals, in the old males at times shows a curious outgrowth © Giuseppe Mazza

To complicate things there is then the chromatic variant of the females of the Red Sea having the lower part of the body yellowish, and it had been thought in the past to create a subspecies, the Gomphosus caeruleus klunzingeri, now considered as a synonym.

Finally, the old males display often a showy outgrowth of the same colour as the body on the upper part of the tubiform snout.

The Gomphosus caeruleus nourish of small invertebrates they catch in the ravines thanks to their protractile mouth, frequent in the Labridae, equipped with hooked canine teeth for holding the preys. It is possible then that they attack also small fishes, as it has been observed being done by the analogous and more studied Gomphosus varius. And like this it is possible that the females, while growing, do change sex, thing quite frequent in the Labridae. 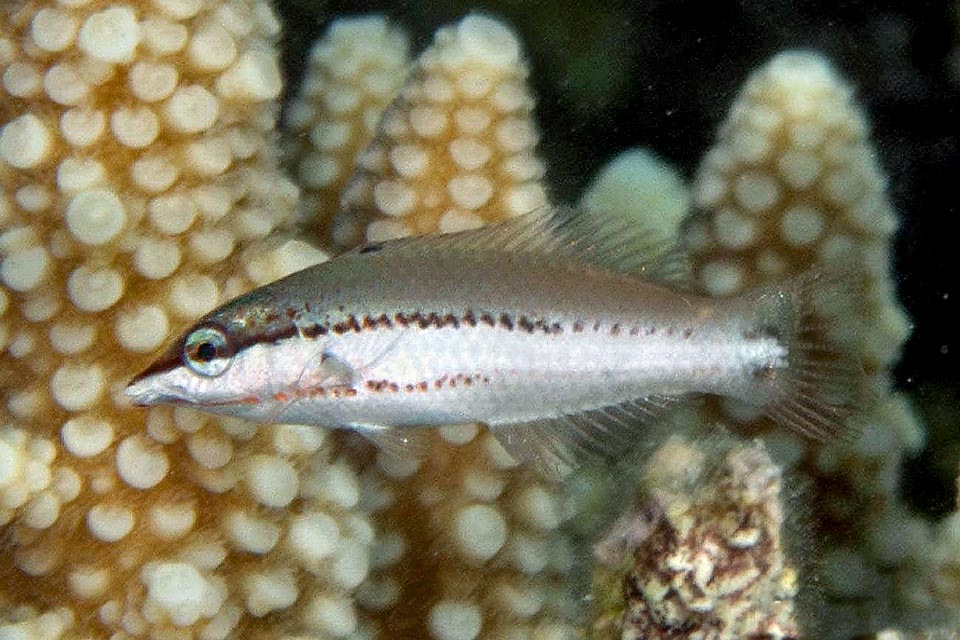 The youths have a totally different look from the adults © Rick Stuart-Smith, Reef Life Survey

The reproduction of the Gomphosus caeruleus happens normally in couple, preceded by a dance culminating with a knock while swimming that marks the emission of the eggs and of the fertilization. For some it may be also a fact of group linked to the moon phases. There are no parental cares and the progeny is entrusted to the currents.

If a population is decimated by the events, the resilience is mediocre with the doubling of the survivors in 1,4-4,4 years.

The Gomphosus caeruleus are coveted preys by the aquarists, but seen their solitary life, the difficulty of catching them and the resulting high price of the market, the levying in nature is modest. The vulnerability risk of the species appears now (2020) moderate, marking 35 on a scale of 100.