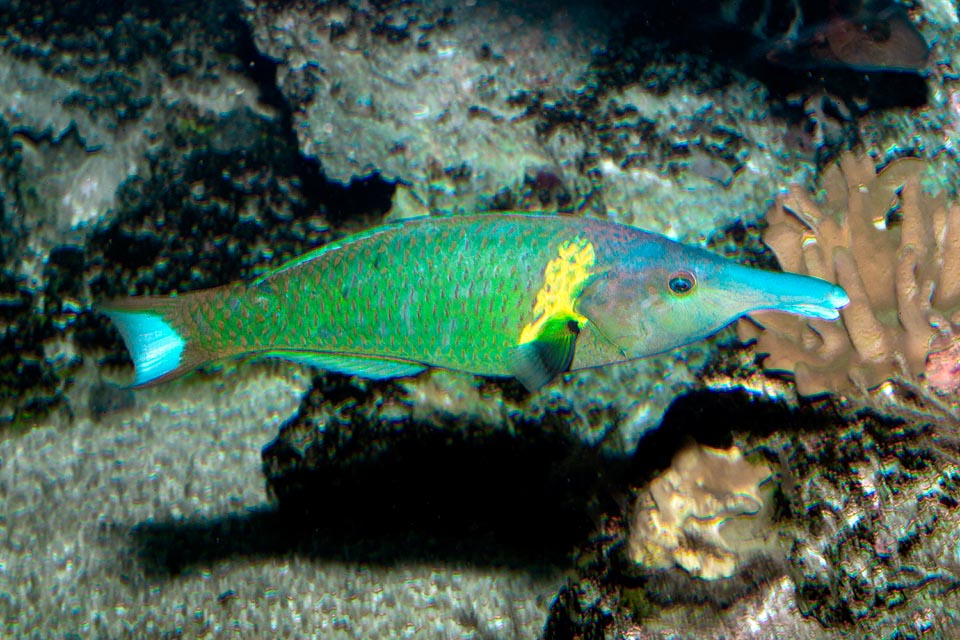 The Gomphosus varius, present from the extreme eastern belt of the Indian Ocean to Oceania, can reach the 32 cm of length © Giuseppe Mazza

The Bird wrasse (Gomphosus varius Lacepède, 1801) belongs to the class of the Actinopterygii, the ray-finned fishes, to the immense order of the Perciformes, and to the vast family of the Labridae.

The name of the genus Gomphosus comes from the Greek “γονφοσ” (gomphos) = nail: due to the look of its snout, whilst the specific term varius means in Latin various, changeable, with a clear reference to its alternating sexual dimorphism.

In the fishes there can be a proterogynous hermaphroditism, that means that the females while growing become males as in the case of the Mediterranean rainbow wrasse (Coris julis), or proterandrous, with males that become females as is the case of the Gilt-head bream (Sparus aurata) or of the Orange clownfish Amphiprion percula but here is the case of animals that may change sex and consequently livery several times throughout life. We speak then of alternating hermaphroditism. 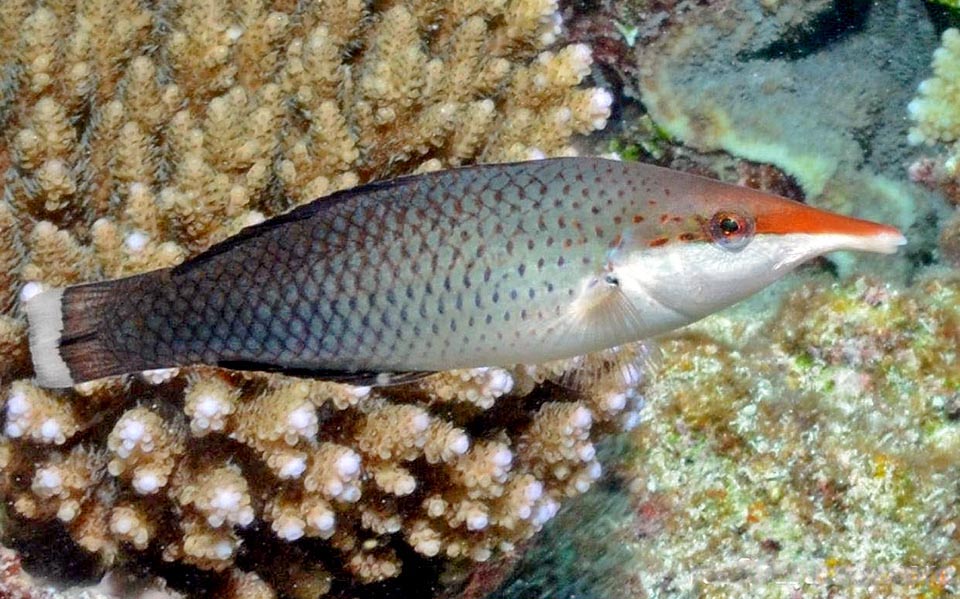 There is a remarkable sexual dimorphism, with females very similar, when young, to those of the Gomphosus caeruleus © Graham Edgar

Obviously, not all intermediate liveries and the close relationship with the Gomphosus caeruleus, where the youth phase of the females is almost identical, the determination is not always easy and the only sure distinctive element is in this last case the region of origin. And to make matters worse, this unbridled Gomphosus varius hybridizes in nature with the Thalassoma lunare and with the Thalassoma duperrey.

With a vast overlapping with the Gomphosus caeruleus from India towards the zone of boundary between the Indian Ocean and the Pacific, the Gomphosus varius extends far beyond eastwards. We find it in all tropical Pacific, indicatively, in Oceania from the Great Australian Barrier Reef and Papua New Guinea up to the Hawaii, Kiribati, French Polynesia and the Pitcairn Islands that mark aligned on New Caledonia the southern limit of the species, whilst northwards it reaches the coasts of China and the southern Japanese islands. 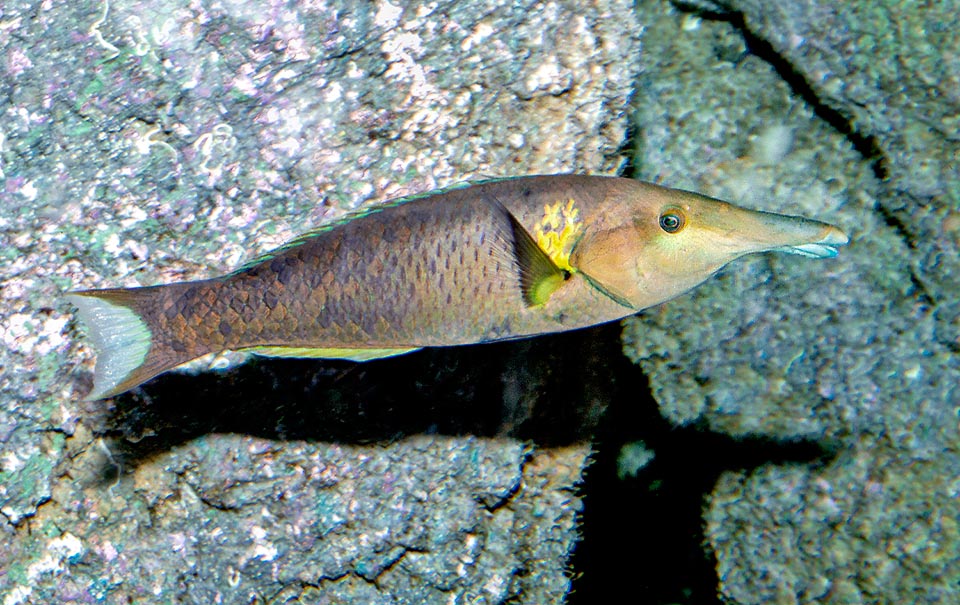 Intermediate livery. The Gomphosus varius is a species with alternating hermaphroditism. The female, growing, can so change livery and transform in males. So far, nothing unusual in the world of the Labridae, except that they, if necessary, may return females. Finally, hybrids exist with the Thalassoma lunare and the Thalassoma duperrey © Giuseppe Mazza

It swims solitary among the madreporic formations at 1-35 m of depth, even if it is more frequent between 2-30 m, where the water is usually included between 24 and 28 °C, frequenting lagoons, atolls but also overhangs on the outer side of the reefs. The juveniles are found at times also in the seagrass meadows.

With its body flattened laterally and the tubiform snout, formed by the immeasurable elongation of the jaws for looking for food in the ravines, reaches, tail included, the length of 32 cm.

It is not easy to describe the livery due to the continuous changing with the age and the changes of sex. 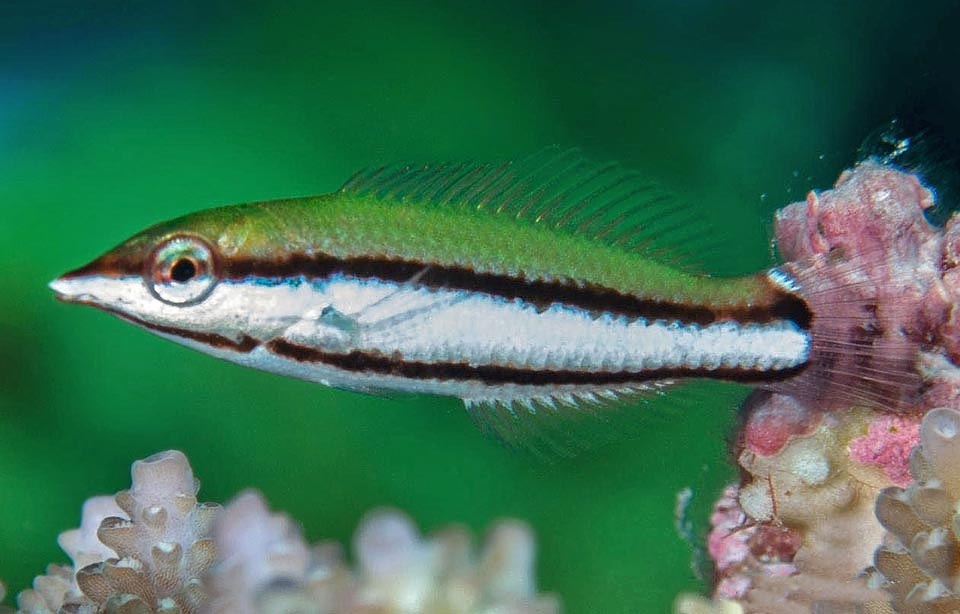 A young. In the first phase the look is totally different. Mimetic stripes apart, the eye is proportionally much bigger and the snout must still elongate © Rick Stuart-Smith, Reef Life Survey

While growing in size, the look of the females will not change too much, whilst the adult males turn green, blue and turquoise with a characteristic and showy yellow band after the operculum, near the translucent pectoral fins with 15-17 unarmed rays and a blue stroke parallel to the edge. 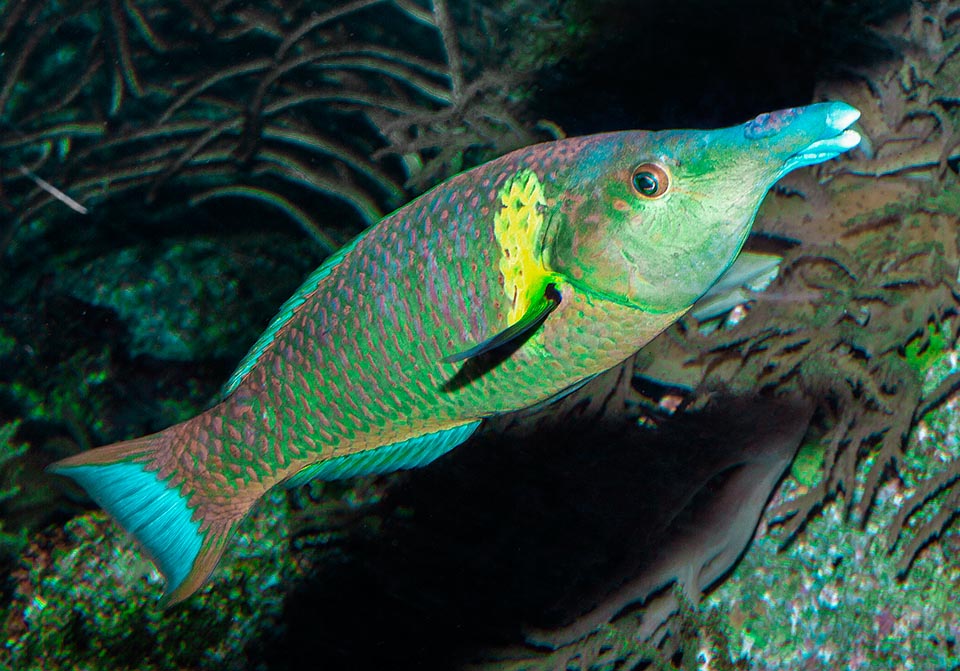 As occurs for the Gomphosus caeruleus, also here the old males can display outgrowths on the upper part of the snout. They seize in the ravines small crustaceans, molluscs, starfishes and small fishes. The bigger preys, held by the hooked canines, are broken up with repeated strokes against stones or corals © Giuseppe Mazza

The Gomphosus varius nourish of small invertebrates, mainly crustaceans but also of small molluscs, starfishes and small fishes they seize in the ravines thanks to their long protractile tongue, like all Labridae, with small hooked canines to hold the preys. If this is too big, they have been observed while breaking it with repeated energetic strokes against stones or madrepores. Active during the day, they spend the night hidden among the corals or even covered by sand.

The reproduction takes place while swimming and the fecundated eggs are abandoned to the currents. If a population is decimated by the events, the resilience is mediocre with the doubling of the remained specimens in 1,4-4,4 years. The vulnerability index of the species is presently (2020) relatively modest, marking 44 on a scale of 100.

Gomphosus varius was last modified: May 3rd, 2022 by Giuseppe Mazza