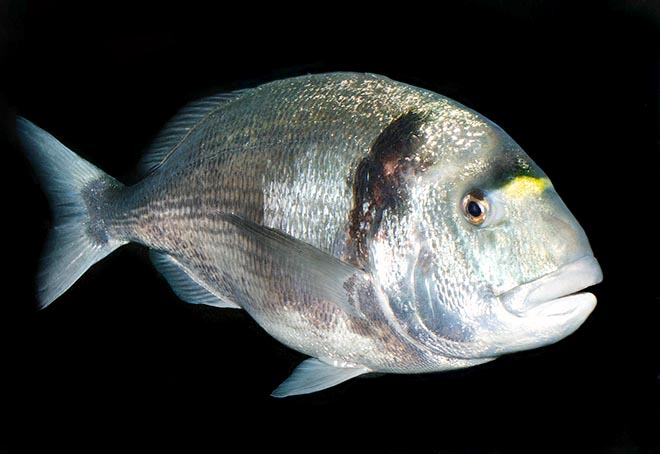 The gilt head bream (Sparus auratus) is characterized, as the name says, by a golden dot between the eyes © Giuseppe Mazza

The Gilt head bream (Sparus aurata Linnaeus, 1758) belongs to the class of Actinopterygii, the ray-finned fishes, to the order of Perciformes and to the family of Sparidae.

The name of the species comes from the Latin “auratus” = golden, due to the typical golden band between the eyes.

It is present in the whole Mediterranean, Black Sea included, where, however, its population is rather modest, and, after Gibraltar Strait, it is found along the eastern Atlantic coast, from England to Mauritania, including the Azores, Cape Verde, Madeira and Canary Islands.

The gilt head bream lives along the coasts up to 30 m of depth. It is often found almost in surface, but it may even go down, exceptionally, up to 150 m. It frequents the rocky locations, the seagrass meadows of Posidonias (Posidonia oceanica) and the sandy seabeds. When it is not too much fished, it lives in schools with individuals of different size headed by the elders; otherwise, as often is the case of the Mediterranean, it carries on an isolated life. It is a decidedly euryhaline species so much that, before reproducing, it spends a good part of the summer in the coastal brackish waters or in the estuaries. 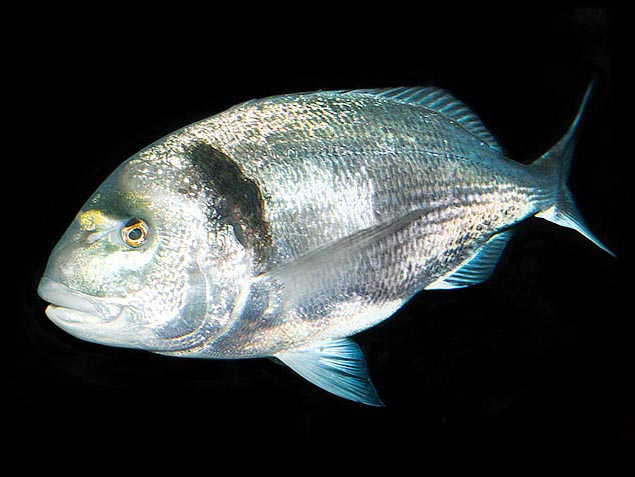 When three, the males turn to females and may reach the 70 cm and 10 kg of weight © Giuseppe Mazza

The back is grey, and along the silvery sides, we note, especially in the juveniles, some longitudinal lines. On the head, between the eyes, is remarkable a typical golden band, which gives the name to the species, emphasized by the near presence of a black band. Typical is also the great dark dot around the upper part of the operculum, which ends slightly pointed with a reddish margin. The iris of the eye is yellow.

The gilt head bream may live 11 years, nourishing mainly of crustaceans and molluscs, especially mussels, it detaches, by means of its solid incisory teeth, from the rocks and happily chews with its molars. Useless to say that this sort of marine nutcracker is not beloved by the breeders of mussels and of oysters, which it crushes, just like that, with its strong jaws.

Even if, occasionally, it enriches the diet with seaweeds, it is clear; with these premises, that the flesh of the gilt head bream is very valuable. Too much fished, it is protected by laws establishing the minimum size of the meshes of the nets, which, for instance, is of 20 cm in the French Mediterranean, and the ever increasing demand of the supermarkets and the restaurants has made to sprout, like fungi, farmings in various countries. It is obvious, however, that, but health hazards, the taste is not the same, and that seen the limited mobility in the cages, and the too abundant food, the flesh of these fishes is significantly more fat.

The Sparus aurata is a protandric hermaphrodite species: this means that the males become females, around the third year of age. Between October and December, the males leave the brackish waters, where they often enter in spring for spending the summer, and reach the sea. Thousands of pelagic eggs of about 1 mm of diameter are spawned, and from these come to life 2,5-3 mm larvae which grow up very quickly. The gilt head breams terribly fear the cold, and when they linger in the shallow waters of the Venetian lagoon, they have noted that, at times, in order not freeze to death, they are obliged to slip in the mud. It’s their Achilles heel, and in the farms they kill them in this way, with a thermal shock, throwing them into the iced water.

Sparus aurata was last modified: May 3rd, 2022 by Giuseppe Mazza