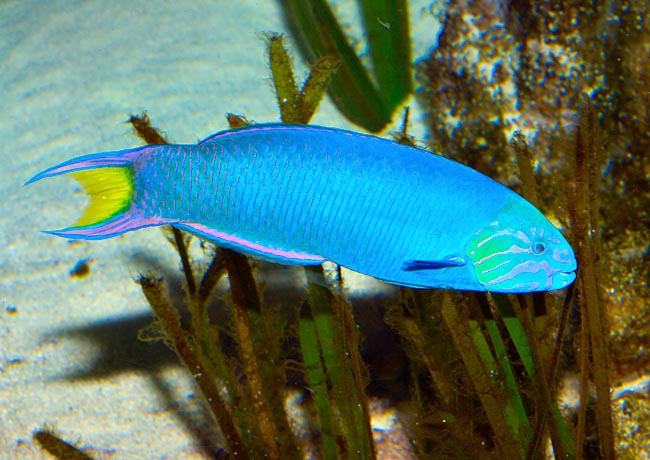 Thalassoma lunare is one of the commonest wrasses of Indo-Pacific. Even 27 units per 100 m2 © Giuseppe Mazza

The very showy Moon wrasse, known also as Blue wrasse or as Crescent wrasse (Thalassoma lunare Linnaeus, 1758) belongs to the class of Actinopterygii, the ray-finned fishes, to the order of Perciformes and to the family of Labridae which counts more than 500 species.

The name of the genus comes from the Greek “thalassa” = sea and “soma” = body; it is, therefore, an animal having the colour of the sea.

The name of the species “lunare” in Latin, refers to the yellow moon-shaped drawing present on the tail of the males.

It has a vast distribution in the tropical waters of the Indian and Pacific oceans.

Indicatively, we find it from South Africa to the Red Sea and the Arabic Sea, at the Seychelles, Mauritius, Maldives, in India, Sri Lanka, Thailand, Australia, Indonesia, Micronesia, New Guinea, Philippines, Taiwan and Chine up to the Ryukyu Islands south of Japan. Eastward, it has colonized Kiribati and Tonga. Southward, in the Pacific, it reaches the Great Barrier Reef, New Caledonia, Lord Howe Island and New Zealand.

It is a very common, diurnal and coastal species, not afraid of waves and currents, always moving among the rocks and the corals up to 20 m of depth. In some zones it gets very high densities, with even 27 individuals per 100 m2. 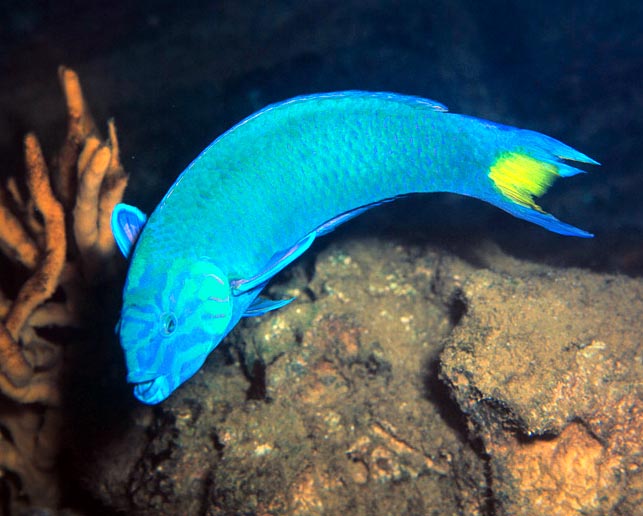 It is a protogynous hermaphrodite species, that is with females that, when growing, can transform into males and the livery shows therefore sexual dimorphism and intermediate stages, with however less marked differences than in other wrasses.

In order to simplify, the juveniles have a brown-greenish livery on the back and pale blue towards the abdomen with two characteristic black spots on the caudal peduncle and at the centre of the dorsal; the females, more colourful, keep the black spot on the peduncle and show pink-magenta drawings on the head with paler traits of the same colour on the edge of the scales and on the fins; the adult males have a showier livery than the females which includes, besides the characteristic yellow caudal spot, showy pink-magenta traits also at the centre of the two elongations of the caudal fin.

The moon wrasse mainly nourishes of small molluscs, crustaceans, eggs, small fishes and generally of all what it can find rummaging the bottom.

When it is menaced or when the darkness comes, it shelters under the sand, as, however, does our Thalassoma pavo of the Mediterranean, in order to sleep peacefully. It lives solitary or in groups, more or less numerous, with an old male as a leader, easily recognizable by the showy livery, who controls, especially during the reproductive time, a temporary territory.

The reproduction takes place all the year long and can be matter of a pair or of a collective ceremony, with even more males for one single female. The fecundated eggs are entrusted to the currents and the larval planktonic phase lasts almost 2 months. In the wild, the Thalassoma lunare can hybridize with the Thalassoma rueppellii, the Thalassoma quinquevittatum and, as it seems, with other species.

Much sought for the aquaria, it is a fish which well adapts to the captivity life. The populations impoverished by the events take 1,4-4,4 years for doubling their members and this species has today a relatively modest vulnerability index, of 48 on a scale of 100.