The colorful and showy Klunzinger’s Wrasse (Thalassoma rueppellii – Klunzinger, 1871) belongs to the class of Actinopterygii, the ray-finned fishes, to the order of Perciformes and to the great family of Labridae, rich of more than 500 species.

The name of the genus comes from the Greek “thalassa” = sea and “soma” = body; so it is matter of a fish having the colour of the sea.

The name of the species honours the memory of Eduard Rüppell (1794-1884), son of a rich German banker. Fascinated by the Natural History, after an exciting journey in Sinai, he studied botany and zoology at the Universities of Pavia and Genoa making various and fruitful scientific explorations. He has been one of the first Europeans to reach the Gulf of Aqaba and Massawa, where this fish is very common. 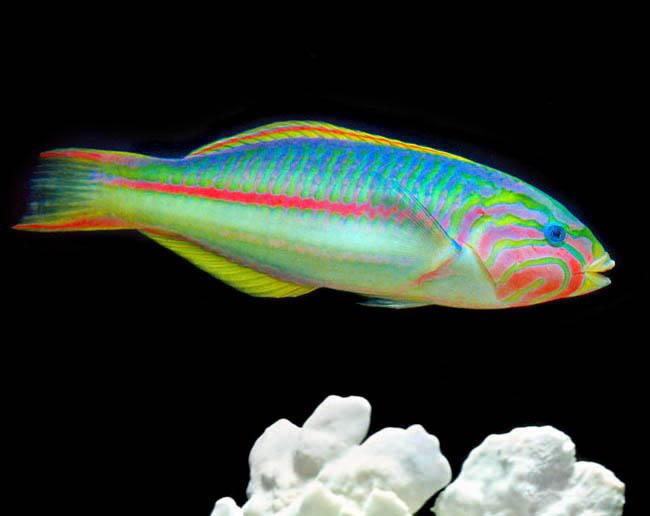 It is a species endemic to the Red Sea.

It lives among the corals, in relatively shallow waters, but also at around 30 m of depth on the outer side of the reefs.

Flat and rangy, it can reach the 20 cm of length with a really unmistakeable livery.

On the pale pastel blue-green colour stands out, at the centre of the sides, a flaming horizontal line from which depart, on top, some pink vertical stripes turning violaceous.

The head is adorned by more or less blue stripes surrounding the eye, but, especially, by red bands like on the outer sides of the tail and at the centre of the long yellow dorsal.

Even if the upper profile of the body is decidedly less bent it reminds, due to the shape of the fins and the spiny rays, the Thalassoma lunare with which often hybridizes.

Also this one is a protogynous hermaphrodite species, that is, with females who, when growing, can transform into males. It nourishes of benthic animals, the eggs are entrusted to the currents and adapts well to the captivity life. The decimated by the events populations can double in 1,4-4,4 years and the species has therefore nowadays a modest vulnerability index, 29 on a scale of 100.