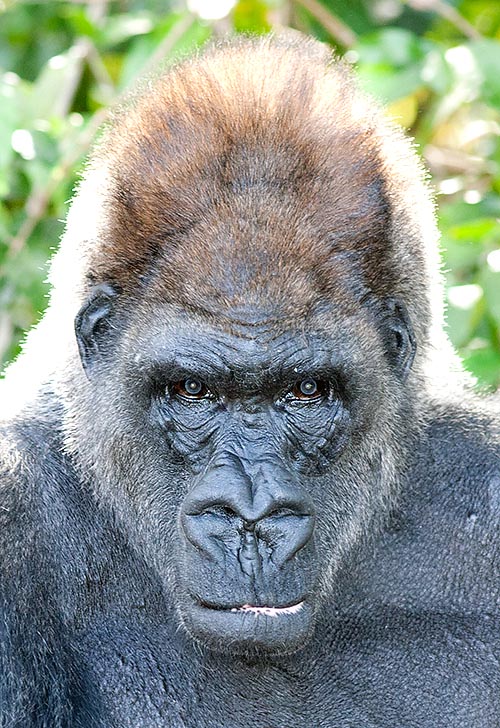 The Western gorilla is a so much known animal to have inspired all sort of literature, from the strips to the novels, but also every other expression of the human culture, from the song (we remind Fabrizio De Andrè’s ballad bearing the same name), till the movies, appearing not only in enlarged form, in the most celebrated King Kong, but in many other adventure movies.

As it often happens in such cases, that is when we have to deal with huge sized and quite strong individuals, the reality is often altered in a so much macroscopic way to move over to the legend, and this in the good as well as in the bad, in the sense that at times dangerous and aggressive animals take on human and friendly aspects, other times, basically pacific and harmless wild beings earn their reputation of dangerous killers.

And the gorilla is not an exception, also thanks to its anthropomorphic look as a giant or as ogre of fairy tales, appearing, in thousands of stories, at times as a terrible menace in ambush inside the pluvial forest, others a basically gentle giant, but capable of apocalyptic destructions, on the style of “Beauty and the Beast”.

The reality stands, as often is the case, in aurea mediocritas (golden mean): the greatest and most powerful ape is also the one most exclusively herbivorous, whereas many other primates are omnivorous and capable of hunting and killing species of various species, man included, as is the case of the chimpanzee and the baboons, but the fact is that also a gorilla, cornered or if feeling endangered, may transform in a really dangerous adversary and capable to kill, and its heralded meekness has some severe natural limits and is in good part invention of the human desire to see the animals as good and basically pacific beings.

Also the gorilla, as we shall see, is capable of appearing overbearing, aggressive and violent, up to kill not only a competitor, but also the young of a family group where he intends to replace the rightful owner. 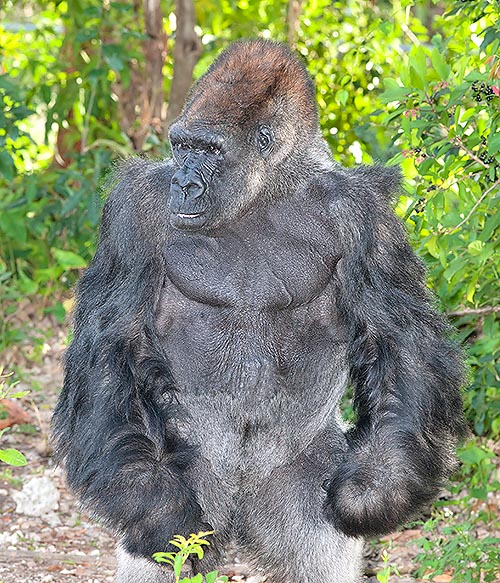 This distinction is based not only on the different geographic distribution but also on some physical characteristics, which it will be perhaps better to remind before treating of “our” King Kong.

The Mountain gorilla (Gorilla gorilla beringei), typical of the thick forest that covers the slopes of the volcanic Virunga Mountains, at the boundary between Congo, Rwanda and Uganda, is the second species as size (a big male may weigh 170 kg and more), and is that with the longest and thickest hair, endowed with a “face” (as it is an anthropomorphic ape my using this term will be excused) quite wide and with a voluminous and robust mandible, with an impressive set of teeth.

The Eastern lowland gorilla (Gorilla gorilla graueri) is the biggest subspecies (the male is up to 175 cm tall and weighs 210 kg), but, paradoxically, is that with the narrowest “face”, the hair covering its body is shorter and usually black, and lives in the low altitude forests at the Congo-Rwanda boundary.

Whilst the zones inhabited by the two previous species are almost contiguous and separated, practically, only by the altitude factor, the Western lowland gorilla (Gorilla gorilla gorilla), lives in a much wider area and distant a thousand of kilometres from the first two, including the vast expanses of pluvial forest from the Atlantic coast to the basin Congo-Uele-Ubangi, up to the most western part of the section of the Rift Valley interesting the Central Africa.

Probably, the two abovementioned zones were, in the old times, united among themselves, but the bigger and unique area of distribution was “cut” by a wide corridor, caused by the drought period of the ice age which interested especially the zone which nowadays separates the two enclaves. 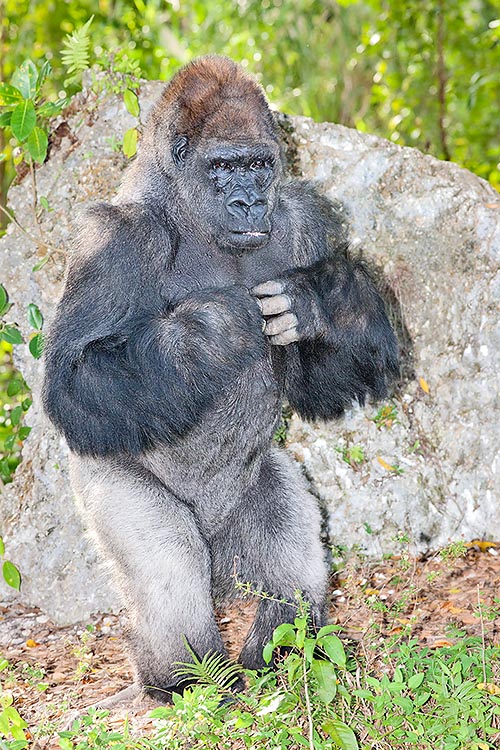 The structure of the gorilla is massive, with long and muscled arms, short hind legs, large and strong hands, feet endowed with prehensile and thick toes. The tail is absent, the thorax is bulky and “barrel-shaped”, and the body is covered by a short hair, less thick than that of the Virunga gorilla, of dark colour, often black-blue, at times brownish or frankly brown.

However, are evident several barren areas (lips, ears, nose, palms of the hands and soles of the feet), and also the thorax presents glabrous, with skin often of grey-blue colour.

The mature males have, usually, a sort of grizzled saddle, and the subcutaneous area of their armpits has gland secreting a liquid with a pungent odour, especially when the ape is under stress or upset, whilst other glands lubricate the palms of the hands and the soles of the feet.

The “face” is wide and flattened, with a relatively short and small nose, prominent supra-orbital arches and frontally placed eyes.

On the skull, an accentuated sagittal crest allows the insertion of powerful muscles which confer the neck a bull appearance, the mouth is armed, especially in the males, of long and strong canines and the teeth include 32 elements as for the man.

The thorax, wrapped by a powerful muscle, is wide, barrel-like, but anteroposteriorly flattened, unlike that of the non anthropomorphic monkeys, which is transversally flattened, and, on the other hand, this section is common also to the man.

The female is much smaller, with average weights around the 80-90 kg, endowed with less developed canines and with a less powerful muscle, even if worthy of a weightlifter.

Among the great anthropomorphic apes, the gorilla is probably the most ..terricolous.

The Asian orang-utan rarely ventures down to the soil and wins the prize of the biggest arboricolous animal; the chimpanzee stands in the middle, often nourishing on the plants, but coming down to the ground for moving from one zone to another; the gorilla is the most terricolous among the big anthropomorphic apes, with a clear preference for the …floor of the pluvial forest where it can find its food.

This ecological niche is due, probably, also to the chimpanzee competition, much more agile climber, which may that can get the best from the more aerial reserves, therefore the …pantry earth remains the only logical reserve to take advantage of. 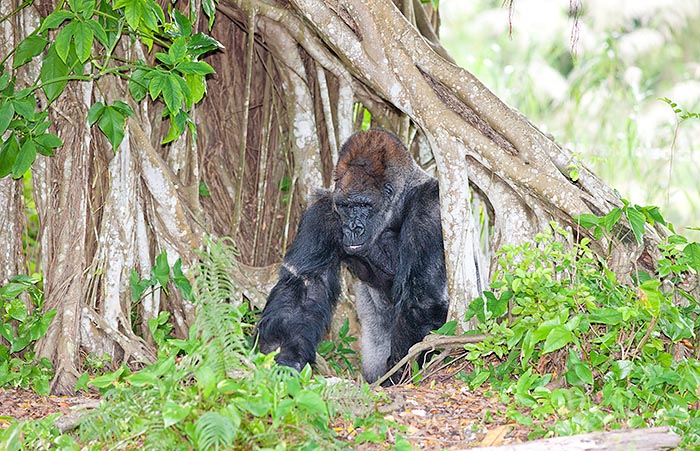 All gorillas prefer to move on all fours © Giuseppe Mazza

Though they are typically forest animals, the preferred habitat by these big apes is formed by zones where the light comes until the ground, filtering through the canopy vault, and where the undergrowth is thick and green, with herbaceous plants and bushes, and this type of conformation is not so much diffused in the forest, being, more frequently, along rivers and water streams.

And here, just to refute the voices of the many Cassandra who see in the human presence and activity always and only doom and destruction, the penetration of the man into the forest reveals, at times, useful.

As a matter of fact, along the tracks and at the edges of the cultivated zones, where the secondary forest grows, finding adequate quantities of food becomes easier and this helps the extension of the zones which are favourable to these primates.

The herbivorous diet includes essences differing from those utilized by the mountain gorillas, especially leaves and herbaceous plants, so rich in liquids, that the gorillas rarely need to drink. 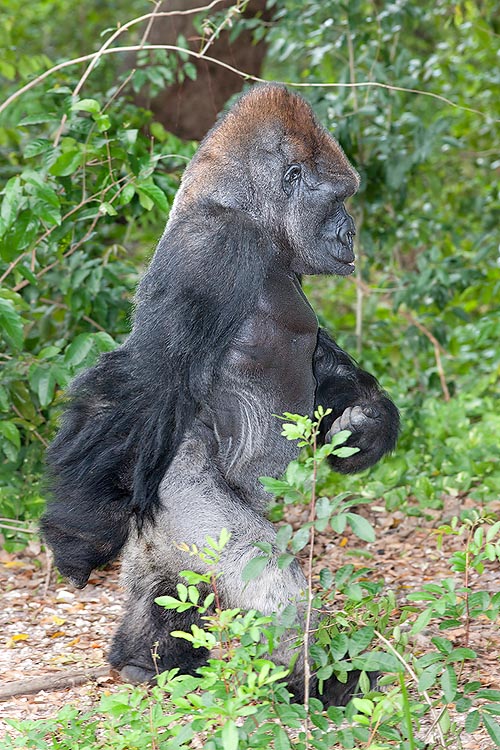 The social organization is of non territorial type, and the typical grouping is formed by an adult male with its harem, from where the young males emigrate when the time comes, for going to conquer, in their turn, a harem.

Also the females born in the group often do emigrate, as it happens among the chimpanzees, the baboons, the geladas and other monkeys, and usually this happens at the puberty, around the 6-8 years of age, when the female gets away for joining another group and reproducing, but it often happens that the nulliparous associates with a still alone male, mating with him and contributing to build up its own personal harem.

The fear and respect inspired by an adult male of gorilla, weighing almost the double of a robust man and at least six times stronger of a weightlifter, moreover equipped, with canines worthy a lion, explains not only the attitude of the man when standing in front of such a heavyweight, but also the fact that the “lord” of a harem is, actually, the lord and absolute owner. The group goes, eats and sleeps where the male decides; if the access to a source of food is limited, it will have obviously the right of way, and no member ever thinks of questioning such leadership.

In return, the male defends females and young against dangers and predators, man included (and in such instance, here is that the “meek” giant may become really dangerous). As an average, a group includes from 2 to 20 individuals, but I read about a group of a good 36 gorillas.

The meeting of different groups is, usually, much more pacific than what happens with the chimpanzees, and the coexistence in an area suitable for nourishing does not present problems, unless there is scarcity of food or that there is another male menacing the young or disturbing a female.

As a matter of fact, it frequently happens that a male “bachelor” decides to take possession of someone else harem, because the competition for the females is, among the gorillas, rather fierce, and in such case, defy and possible fight become rather awesome and often violent.

The communication systems among individuals are both visual and sound: the great primates have a particular accessory vocal organ: the laryngeal sac more developed in the male, which acts as resonating chamber, allowing, among other things, to emit the characteristic sound of the chimpanzee, that sort of panted Hu-hu-hu and the series of deeper Hu-Hu-Hu of the gorilla, often accompanied by the drumming of fists on the chest. 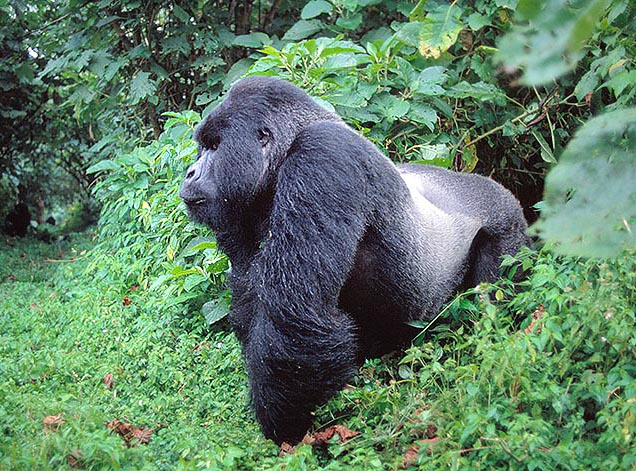 The mountain gorilla (Gorilla gorilla beringei) has thicker hair and counts 800 specimens only © A. Pellegrini

The challenge between males includes a mise en scene for impressing the competitor, with a pompous Trastevere bully gait, slaps and punches on the ground, the aforementioned breast-beating with musical accompaniment of deep Hu-hu-hu and noisy charges in the undergrowth which, at the end, may become a real destructive charge, often detrimental also to the young or to some female.

The physical clash, when this happens, involves, most of the times, wounds and fractures, often found in individuals found dead for other causes or for old age: broken canines and old scars reveal a not completely pacific life in many specimens. In a study effected on the mountain gorillas of the Virunga, almost the 75% of the male gorillas found dead did show signs of previous injuries from fighting.

The violent fight, as I said, at times ends in involving young and females, at times with demise of the same.

The reproduction follows rather slow cycles, and the female begets, as an average, every four years, unless the young dies or is killed, in which case the female becomes receptive almost immediately, and so, in a lifespan of 40-50 years, a female delivers an average from 3 to 6 times. The female is somewhat …uninhibited, when the mating moment comes, and seems to provoke the male in a shameless way; the coupling happens more frequently from behind, but there are cases of …missionary positioned intercourse, fact which has probably contributed to the outbreak of the human imagination about the presumed interest of the male gorilla for the female of the human species.

The pregnancy lasts eight months and a half, and the newborn weighs less than a baby (bout two kilos), but increases its weight rapidly, at a speed double than the human one, and depends strictly on the mother, who, for the first six months, keeps a very close contact with him.