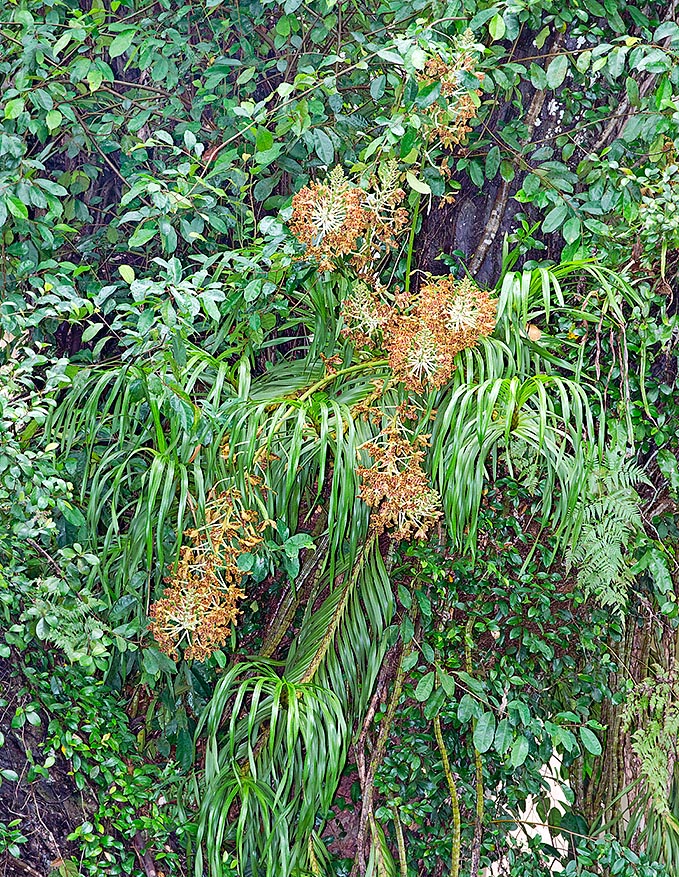 The species is native to the Bismarck Archipelago, Borneo, Java, Laos, Moluccas, Myanmar, Peninsular Malaysia, New Guinea, Philippines, Singapore, Solomon Islands, Thailand and Vietnam, where it usually grows in the pluvial forests on the trunks or on the bifurcations of big trees, often along the banks of water streams, at low and medium altitudes.

The name of the genus is the combination of the Greek terms “gramma” = letter and “phyllon” = leaf with reference to the tiny and thick dark spots on petals and sepals; the name of the species is the Latin adjective “speciosus, a, um” = beautiful, with obvious reference.

Grammatophyllum speciosum Blume (1825) is an epiphytic, rarely lithophytic species, with robust close together cylindric pseudobulbs, up to about 3 m long and of 5 cm of diameter, initially erect then drooping, which with the time assume a yellowish colour, with 2-4 cm long internodes.

It has roots bent downwards as well as upwards, these last, robust, rigid and ramified, form a zone of accumulation of vegetable debris which contribute to the nourishment of the plant.

The inflorescences, from the base of the pseudobulbs, are erect racemes up to about 2 m long, on a peduncle of about 2 cm of diameter, carrying numerous flowers of 10-12 cm of diameter, on an about 8 cm long pedicel, slightly and pleasantly perfumed, which open in succession. 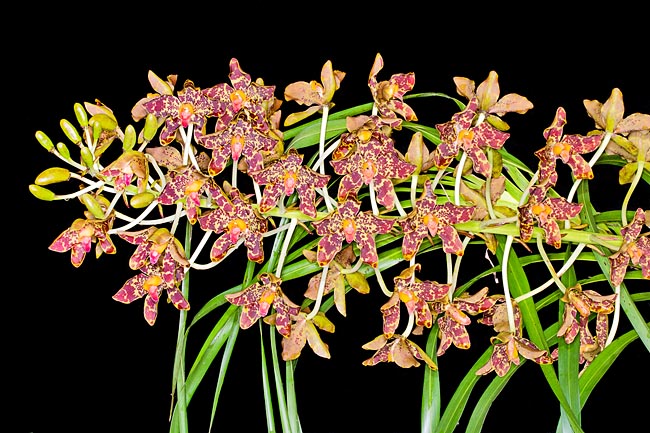 At the base of the inflorescence are present some rather spaced and anormal flowers, usually with two sepals and without labellum or column, whilst in the rest they are close and perfect.

The petals and the sepals are oblong-elliptic with rounded apex, 5-6 cm long and 2,5-3 cm broad, of cream white colour, or greenish yellow, or yellow dotted of brown or dark brown, the labellum is trilobed, about 2,5 cm long and 2,5-3 cm broad, yellow, with central lobe crossed by red lines and erect lateral lobes streaked of brown, the column, slightly bent, is about 2 cm long, greenish above, white dotted of purple below.

The fruits are oblong capsules up to about 12 cm long and 5 cm broad.

It reproduces by seed, in vitro, micropropagation and by division, with each section provided with at least 3-4 pseudobulbs. 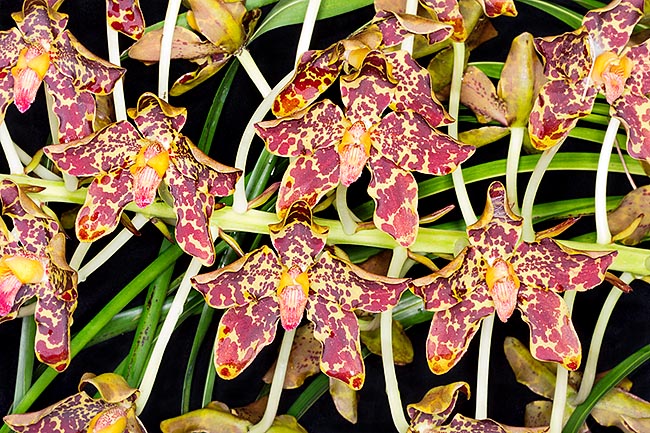 Big species, considered as among the biggest, if not the biggest among the orchids, with spectacular long lasting flowering, about two months, even if rather erratic (with intervals of 2-4 years) and only when sufficiently tufted, nowadays rare in the wild and uncommon in cultivation as it needs vast spaces, capacious pots or baskets and high luminosity, full sun or, at the most, slight shade.

It requires high atmospheric humidity, even if less demanding, from this point of view, than other orchids, day temperatures of 22-28 °C, even if it can bear greater values, and 16-18 °C the night with lowest values not under the 12 °C, regular and abundant watering, but without stagnations, during the growth time, slightly spaced, allowing the compost to dry up, during the vegetative stasis; fundamental is a good and constant aeration. For watering and possible nebulisations, the rain water, from reverse osmosis or demineralised, is to be used. The fertilizations, properly distributed and alternated, in way to avoid salts accumulation at the roots, are to be done during the vegetative period preferably with hydro soluble balanced products with microelements. 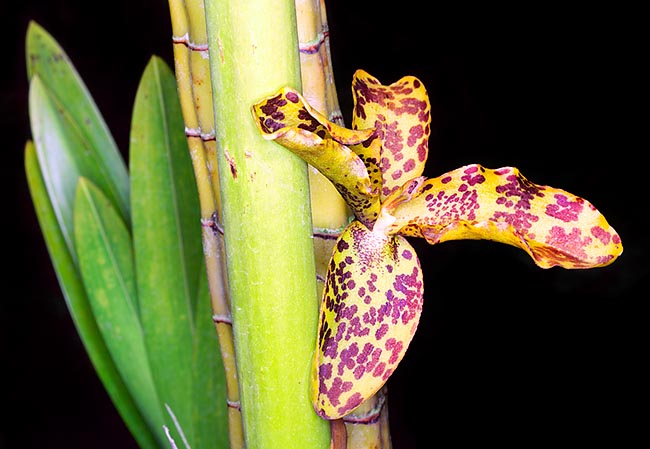 At the inflorescence base we note alone abnormal flowers, often with 2 sepals and no labellum or column © Mazza

Where the climate allows the cultivation in open air, it may be grown as epiphytic on trees capable to sustain its weight, which may reach various hundreds of kilos, or in containers in suitable supports, elsewhere, in pots or baskets, possibly suspended, in spacious and particularly luminous greenhouses with substratum formed by fragments of earthenware or other draining material placed at the base, charcoal and decomposed leaves or fragments of medium-sliced bark.

It does not like being disturbed, so transplants and divisions are to be done, when strictly necessary, by the vegetative restart, indicated by the appearance of the new roots.