The very unusual Golden-striped soapfish (Grammistes sexlineatus Thunberg, 1792) belongs to the class of Actinopterygii, the ray-finned fishes, to the order of Perciformes and to the family of Serranidae, which counts 75 genera and more than 500 species.

The etymology of the genus comes from the Greek “gramma” = drawing, brand, mark, with reference to the charac- teristic drawing, more or less outlined, with white stripes.

The name of the species “sexlineatus”, specifies in Latin that the afore- mentioned stripes are usually six.

We find it, indicatively, from South Africa, Madagascar and the Comoro Islands up to the Red Sea, the Seychelles, Mauritius, Réunion, Maldives, India, Sri Lanka, Thailand, Malaysia, Andaman Islands, Australia, Indonesia, Micronesia, New Guinea, Palau, Philippines, Taiwan, China and the Ogasawara Islands in the southern part of Japan. Eastward, it has colonized the Fiji, Samoa, Tonga, Marquesas Islands, Tuamotu and Mangareva. Southward, in the Pacific, it has colonized Lord Howe Island, the New Caledonia, the Kermadec Islands and even the northern coasts of New Zealand. 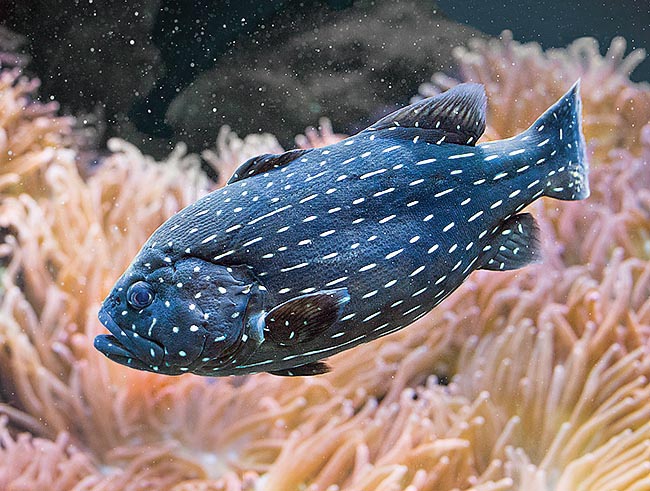 The skin, sour at taste, is rich of poisonous glands releasing, when needed, a strong toxin © Giuseppe Mazza

It lives in the coralline formations, often on the outer side of the reefs, up to 130 m of depth.

The golden-striped soapfish may reach the 30 cm. The current name says a lot about the shape, not really suited to a grouper, but also here the lower jaw is longer than the upper one and the big mouth has various rows of teeth, with hooked and caniniform elements for catching the preys.

The background colour is dark brown, tending often to the blue, with horizontal white stripes in the males and yellowish in the females. These are three in the first juvenile stages, 6 in the individuals exceeding the 8 cm, and often more numerous in the old ones, where they often appear broken in small traits and dotting.

But the most salient characteristic of the species is the poisonous skin, extremely bitter at the taste, rich of small glands which release, when the fish is under stress, a powerful toxin, called grammistin that scares away the predators. 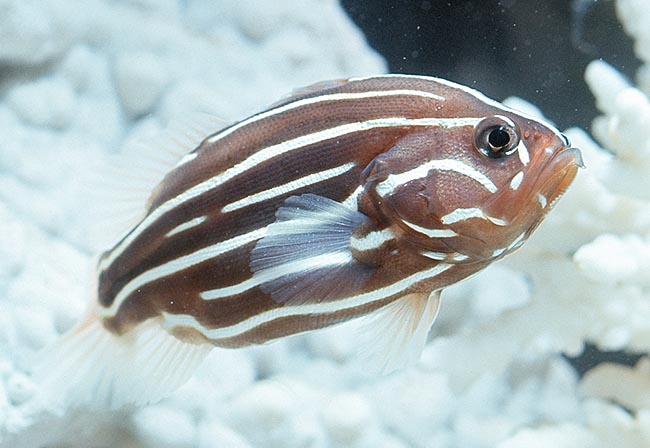 Young with the typical six stripes. In the old they are more numerous and broken © Giuseppe Mazza

In aquarium it can be fatal for the other guests and when you buy a Grammistes sexlineatus it is always good to throw away the water of the bag used for the transportation because by sure it will be full of poison.

The Golden-striped soapfish is very greedy. It nourishes of all what it finds: crustaceans, molluscs, but especially fishes, also the herbivorous ones who graze poisonous weeds. So, in its flesh does accumulate, little by little, the toxin responsible of the ciguatera, a serious alimentary intoxication for the careless tropical consumers.

The uncountable eggs and larvae are pelagic.

Taken into account the vast diffusion, the diversified diet, the absence of predators, the fact that practically it is not fished, with populations which may double in few years, it stands by sure among the less menaced groupers, with a modest vulnerability index of 31 on a scale of 100.