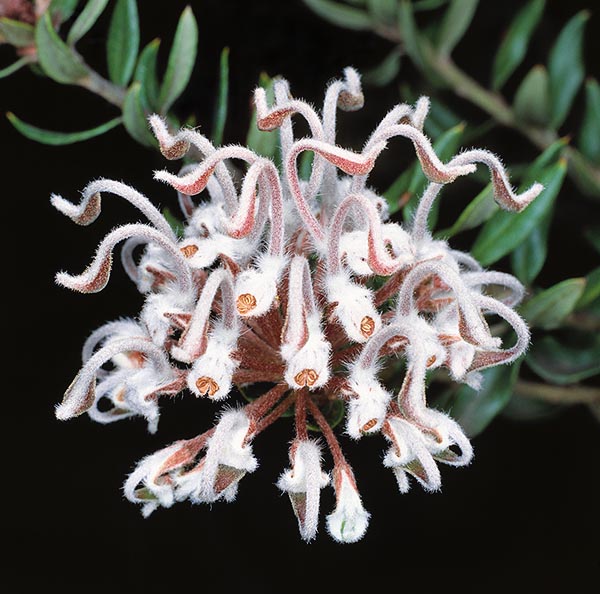 The species is native to Australia where it grows in the open forests along the central coasts of New South Wales on generally sandy soils.

The genus is honoured to the English collector Charles Francis Greville (1749-1809), who was one of the founders of the Royal Horticultural Society; the name of the species is the combination of “buxus”, Latin name of the box, Buxus sempervirens L. (1753), and “folium” = leaf, with reference to the shape of the leaves.

The Grevillea buxifolia R.Br. (1810) is a much ramified evergreen shrub, 1-2 m tall, with the young branches covered by a brown down.

The leaves are alternate, simple, entire with downwards curved margins, oval to elliptic with pointed apex, 0,8-2 cm long and 0,3-0,8 cm broad, of dark green colour, harsh and speckled on the upper page, covered by a short greyish hair below.

Sub-globose terminal inflorescences, of about 5 cm of diameter, with flowers, on a pedicel covered by a reddish brown hair, with corolla formed by 4 tomentose tepals of reddish colour externally, white and villous inside, curved in way to display the inner part, and villous pistil, 1-2 cm long, with orbicular stigma equipped with a curved appendix.

The fruits are villous ovoid follicles, about 2 cm long, containing two flat seeds. It reproduces by seed, previously scarified and immersed in water for one day in order to increase its percentage of germination, in sandy loam kept humid at the temperature of 22-24 °C, and by cutting, but with a low percentage of rooting.

Species with ornamental foliage and unusually shaped flowers, with the curved and villous pistils which give the inflorescence the appearance of a spider, hence the common name, cultivable in the subtropical and warm temperate climate zones in full sun or slight shade; it resists, dry and for a short period, to lower temperatures up to about -4 °C.

It requires preferably sandy soils, well draining, slightly acidic to slightly alkaline, and well rooted may resist to long drought periods; utilizable in mass in parks and gardens and for formal as well informal borders.