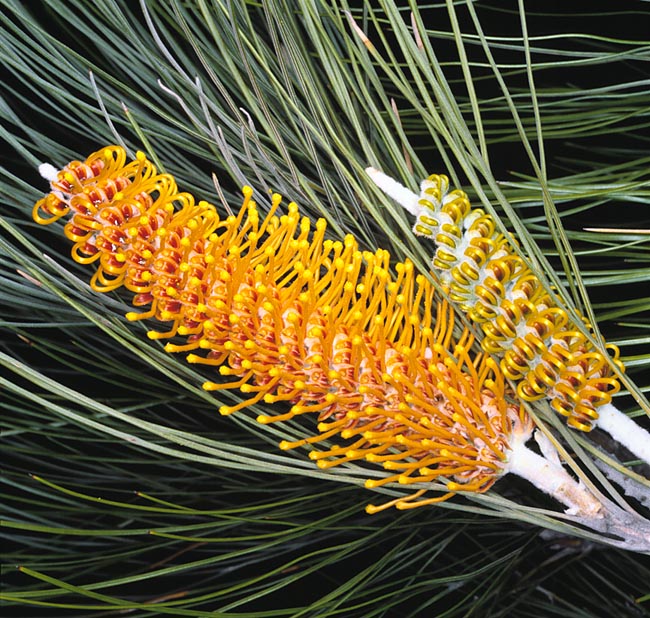 The species is native to Australia (Northern Territory, South Australia and Western Australia) where it lives in usually sandy arid zones characterized by relatively humid winters and warm and dry summers.

The genus is honoured to the English collector Charles Francis Greville (1749-1809), who was one of the founders of the Royal Horticultural Society; the name of the species is the combination of the Greek terms “erion” = wool and ‘stachys’ = panicle, with reference to the inflorescence.

The Grevillea eriostachya Lindl. (1839) is a 1,5-4 m tall evergreen shrub with 5-30 cm long leaves, pinnate, composed by 2-7 linear coriaceous segments, 8-20 cm long and 1-2 mm broad, or entire on the floriferous branches, of green-grey colour and covered by a thick and short down on the upper page.

Racemose terminal inflorescences, simple or compound, conical, 10-25 cm long with woolly rachis, emerging over the foliage on an up to about 40 cm long robust peduncle, carrying numerous flowers rich of nectar with 4 tepals about 0,8 cm long, tomentose, green when in bud, then gold yellow, and 1,5-2,2 cm long pistil of the same colour; the flowering proceeds from the bottom upwards (acropetal). The fruits are compressed ellipsoidal follicles, tomentose, 1,5-2,2 cm long, 1-1,3 cm broad and about 0,6 cm thick, containing two oval flat seeds. It reproduces by seed, previously scarified and immersed in water for one day in order to increase the percentage of germination, in sandy loam kept humid at the temperature of 22-24 °C, and by grafting on Grevillea robusta.

Species amply diffused in central-western Australia where it blooms in whatever period of the year, stimulated by some rain, with a peak in winter-spring, it requires a Mediterranean type climate with mild winters and warm and dry summers, it stands, dry, lower temperatures up to about -4 °C, for a very short period; it does not adapt to grow in zones characterized by humid summers, unless grafted on resistant species. It requires particularly draining soils, preferably sandy, poor, neutral or alkaline, and well rooted may resist to long periods of drought, it is therefore suitable for being utilized in desert-type gardens; appropriate prunings can help in keeping compact its habit.

The nectar, abundantly produced, in addition to being appreciated by the birds, which take care of the pollination, is consumed and used as sweetener by the aboriginals since remote times. It usually resists to the fire, unless the same is particularly intense, thanks to the presence of the lignotuber, upper part of the root, enlarged and lignified, which allows the plant to regenerate after the fires.