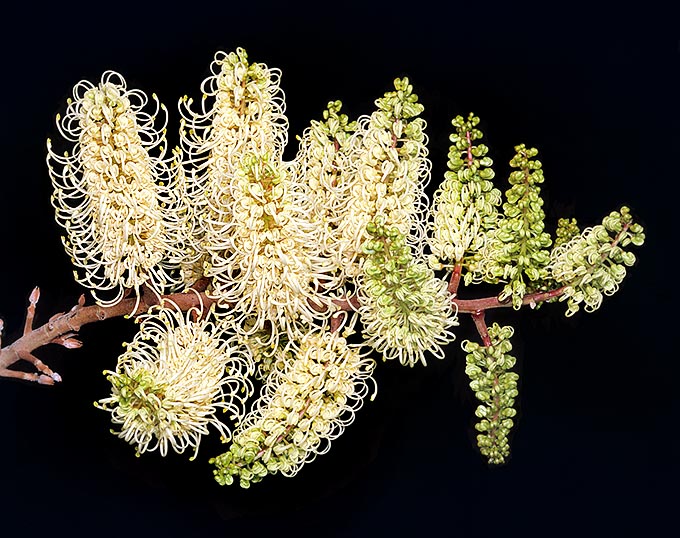 Grevillea leucopteris flowerings are showy but, after some, smelly © Giuseppe Mazza

The species is native to south-western Australia where it grows in the shrubby thicket on sandy poor soils.

The genus is honoured to the English collector Charles Francis Greville (1749-1809), who was one of the founders of the Royal Horticultural Society; the name of the species is the combination of the Greek terms “leukos” = white and “pteron” = feather, wing, with reference to its foliage.

Terminal panicle inflorescences emerging for 1-1,5 m over the foliage, on a robust arcuate peduncle, composed by 5-14 racemes up to about 16 cm long, with typical floral and peduncular bracts of dark pink colour in the initial phase of the blooming, and self-fertile hermaphrodite flowers, on 0,5-1 cm long pedicel. Cream white perianth, formed by 4 about 0,6 cm long tepals, and 2,5-3,3 cm long pistil of the same colour; the flowers, rich of nectar, emanate a pungent odour, in particular during the night hours, by many considered as unpleasant. The fruits are ellipsoid compressed follicles, 2-2,4 cm long, containing two seeds. It reproduces by seed in sandy loam kept humid, at the temperature of 20-22 °C, and by semi-woody cutting.

Species having a spectacular flowering, but with a particular and intense odour discouraging its use in close proximity of dwellings and resting places, cultivable in full sun in the subtropical and warm temperate of Mediterranean type climate zones, but is capable to adapt also to zones characterized by humid summers, unlike many species native to the south-western Australia. It is not particular about the soil, provided the same is perfectly draining, in fact, it grows on acidic sandy soils as well as on heavy alkaline ones and is somewhat resistant to the low temperatures, as it can stand, for short time and dry to values up to about -6 °C.