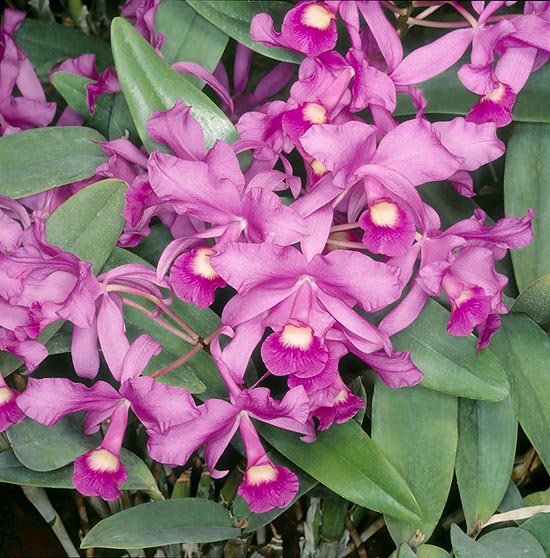 The species is native to south-eastern Mexico and to Central America (Belize, Costa Rica, El Salvador, Guatemala, Honduras, Nicaragua and Panama), where it grows as epiphytic on the branches and trunks of the trees of the humid forests as well as lithophytic on granite slopes up to about 1400 m of altitude. The name of the genus is the combination of “guaria”, term with which in Costa Rica are called the orchids and “anthos” = flower; the species is honoured to its discoverer, the English naturalist George Ure Skinner (1804-1867).

The Guarianthe skinneri (Bateman) Dressler & W.E.Higgins (2003) is an herbaceous, evergreen, caespitose species, with creeping rhizome from which originates at every vegetative season one (at times two) fusiform pseudobulb, 15-35 cm long and of 2-3 cm of diameter, with at the apex two fleshy leaves, oblong with blunt apex, up to 20 cm long and about 6 cm broad.

Terminal racemose inflorescence, up to 13 cm long, initially enclosed in a bract (spathe) which has the task to protect it during the initial phase, carrying a variable number of flowers, from 4 to 12, of 8-10 cm of diameter, of pink to purple colour, with labellum having a more intense colour and white or cream throat; a wholly white form does exist.

The sepals are linear-lanceolate, pointed, 4-6 cm long and 1-2 cm broad, the petals, ovate and undulated at the margins, are 4-6,5 cm long and 2-5,5 cm broad, the labellum, entire or slightly trilobed, is funnel-shaped,with curved margins over the column, then open and rounded towards the extremity, 3-5 cm long and up to 3,5 cm broad, run longitudinally by a small line in relief, the column is short, about 1 cm.

The flowering takes place between the late winter and the early summer from the pseudobulb ripened the previous summer, the spathe often dries up during the winter, but this does not mean that the floral bud is compromised; the flowers last 2-4 weeks.

It reproduces by seed and by meristem in vitro and, amateurishly, by division, with each section provided with 3-4 pseudobulbs with at least one dormant bud at the base.

Vigorous species, floriferous and of easy cultivation, quite popular in Central America, in particular in Costa Rica, circumstance which, along with the anthropization, has caused its progressive rarefaction in the wild. It requires a slight shade during the vegetative period, in summer, and high ambient humidity, 80-85%, with medium-high temperatures, as it bears even values up to a little more than 35 °C; the waterings must be frequent, but allowing to dry up well before giving water again. In autumn-winter, the waterings and the humidity are to be reduced, in order to second the resting period, maximum luminosity, also direct sun, with night lowest temperatures around the 14-16 °C; during all seasons a good movement of air is essential.

It can be cultivated in pot or in basket with a well draining compost, which may be formed by grossly sliced fragments of bark, of rock, of clay pots, of charcoal or of a mix of them, otherwise mounted on raft or bark pieces; the air circulation is important also at the roots level, as they must be able to dry up quickly, being rather sensitive to rottenness if in contact with permanently wet material.

For the waterings and the nebulisations are to be used rain water, or water obtained by reverse osmosis or demineralised; the fertilizations, duly distributed in way to avoid salts accumulation, are to be done during the vegetative period, preferably with hydro soluble balanced products, with microelements, at half dosage, or less, than what suggested on the package. Division, repotting and mounting on branch or bark are to be done by the appearance of the new roots.

Classified until 2003 in the genus Cattleya, it has been separated from this one and inserted in the new genus after studies done about its DNA.

The species is inserted into the appendix II of the CITES (species whose trade is internationally ruled).