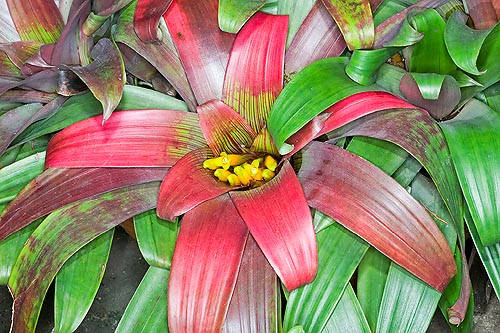 The Guzmania sanguinea (André) André ex Mez (1896) is native to the pluvial forests of Brazil, Clipperton Island, Cocos Island, Colombia, Costa Rica, Ecuador, Panama, Trinidad and Tobago and Venezuela, where it grows up to 1.000 m of altitude.

The genus is honoured to the Spanish naturalist Anastasio Guzman (†1807); the name of the species is the Latin word “sanguinea” = bloody, with reference to the colour of the central leaves during the blossoming period.

Evergreen herbaceous plant, monocarpic (bearing one fruit only during its existence), acaulescent, epiphytic, about 20 cm tall, it has an open and flat rosette of unarmed leaves placed in way to form a central cavity, usually full of water. The leaves are lanceolate, 25-35 cm long and 4-6 cm broad, of a glossy green colour but the base, which, for about 10 cm, is brown with longitudinal violet stripes; the central leaves, shorter, by the blossoming time become bright red or orange-yellow with green patches, colouration persisting for several months till the end of the blooming, when the colour becomes green again.

Differently to most of the Guzmania, the inflorescence is formed by an extremely short raceme, placed in the bottom of the rosette, so much to be possibly mistaken with a Neoregelia. The floral bracts are about 16 mm long and 14 mm broad, just shorter than the sepals, whilst the tubular flowers have about 6 cm long orange-yellow petals; the pollination usually happens thanks to the humming birds, attracted by the bright red colour of the central leaves. The fruit is a cylindrical, dehiscent (fruit opening spontaneously when ripe along the lines of least resistance), capsule containing numerous seeds provided with a feathery appendix which helps their dispersion.

It reproduces, besides by seed, by vegetative way through the new plants originating close to the centre of the rosette, usually one or two at most, occasion which does not help in its diffusion; for their particular difficult accessible position it is better to delay the removal as long as possible, as this causes, practically, the death of the mother plant. The plant, by sure one of the most ornamental of the genus during the blossoming time, can be cultivated in open air in the tropical and humid subtropical climates both as epiphytic on the low branches of the trees, and as terrestrial on acidic, aerated, draining, and rich of organic substance substrata, in preferably shaded position.

Elsewhere, it is to be cultivated in pot, and, as such, it is very much appreciated for indoor decoration, on porous and draining substrata which can be formed by bark broken into small pieces and coarse peat, with addition of sand or other inert material; it is not much particular about the light and can be placed also in not poorly luminous locations, with temperatures which is good to keep over the 14°C, best by 20-24°C.

Watering must be regular in summer, but allowing the substratum to dry up before giving water again, and reduced in winter and the ambient humidity, in presence of dry air and high temperatures can be increased with nebulisations utilizing water at room temperature, not only for avoiding anti aesthetic dots on the leaves, but also because the plant does not stand their presence. Some water, always without limestone, can be left in the central cavity formed by the rosette of leaves, renewing it frequently in order to avoid that it becomes a nest of mosquito larvae, whilst in winter, and anyway during all over the blossoming time, it is to be left dry, as the plant is sensitive to rottenness.