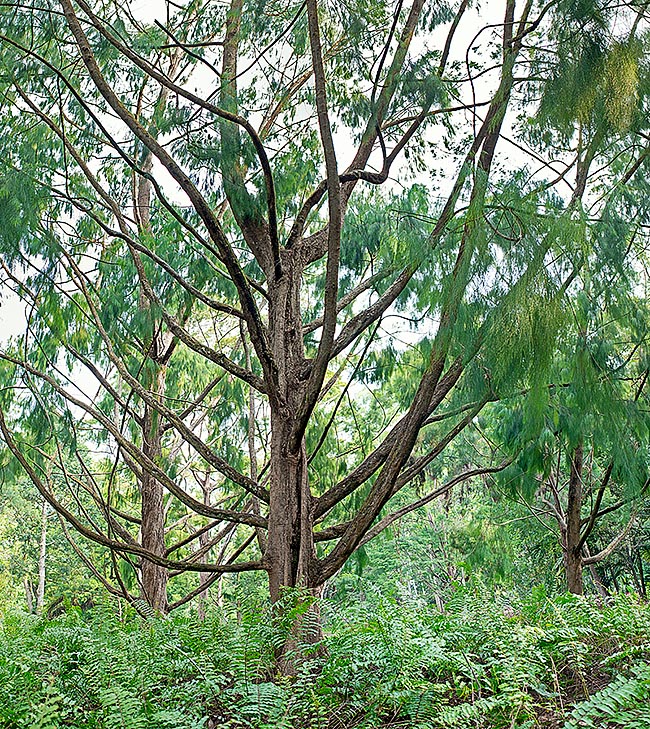 The species is native to Papua New Guinea where it grows in the forests, often along the banks of the streams and on the rocky slopes, representing in many areas the dominating species, from the sea level up to about 2000 m of altitude.

The name of the genus is the combination of the Greek adjective “γυμνός” (gymnós) = naked and of the substantive “στόμα” (stoma) = mouth, orifice, with reference to the non protected stomata; the specific name is the Latin adjective “papuanus, a, um” = of Papua, with reference to its place of origin.

The Gymnostoma papuanum (S.Moore) L.A.S.Johnson (1982) is a diocieous evergreen tree, 10-30 m tall, with trunk up to 45 cm of diameter and wrinkled bark of pale brown colour, longitudinally fissured.

Thin filiform quadrangular branchlets, of green grey colour, that perform the chlorophyllian function, with little deep groves between the edges that expose the stomata.

The leaves, arranged in verticils of 4 in correspondence to the nodes, are reduced to tiny triangular scales almost invisible. The roots can fix the atmospheric nitrogen through the radical nodules (actinorhizas) formed by bacteria belonging to the genus Frankia Brunchorst (1866). The inflorescences are terminal, the male ones are spikes with flowers formed by only one stamen, the female ones are capitula similar to strobili with flowers having no calyx and corolla enclosed by two bracts that lignify when ripe. The fruits are samarae, about 0,6 cm long, freed by the bracts when ripe and dispersed by the wind.

It reproduces by seed, that has a short-lasting germinability, in sandy loam maintained humid at the temperature of 24-26 °C. Fast growing species, is considered as one of the most ornamental of the family of the Casuarinaceae thanks to its lightness and elegance of the crown. 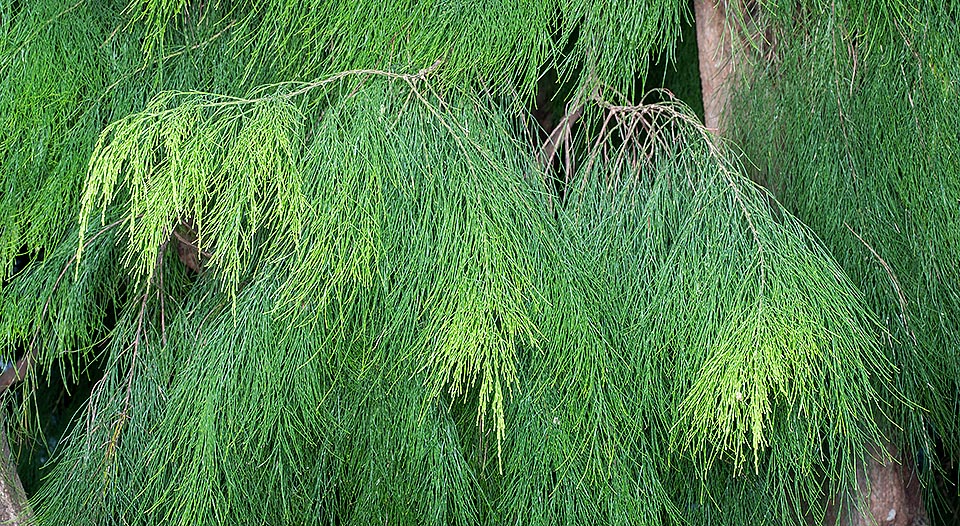 The quadrangular filiform branchlets perform the chlorophyllian function, with little deep groves among the edges that expose the stomata. The leaves, arranged in verticils of 4 at the nodes, are reduced to tiny triangular scales almost invisible. The roots fix the atmospheric nitrogen with nodules formed by bacteria © G. Mazza

It requires full sun and adapts to ample intervals of temperature, rainfall and types of soil, even if poor, thanks to the capacity of fixing the atmospheric nitrogen, in particular the ultrabasic ones, sandy to stony, semi-arid to swampy; it often behaves as pioneer species, for instance in the areas deforested by the fires. The local populations utilize the wood as fuel and for the production of charcoal, in the constructions, for foundation piles and joinery, and for common use objects. Finally, it should not be underestimated its potential as ornamental species in the tropical and subtropical gardens.