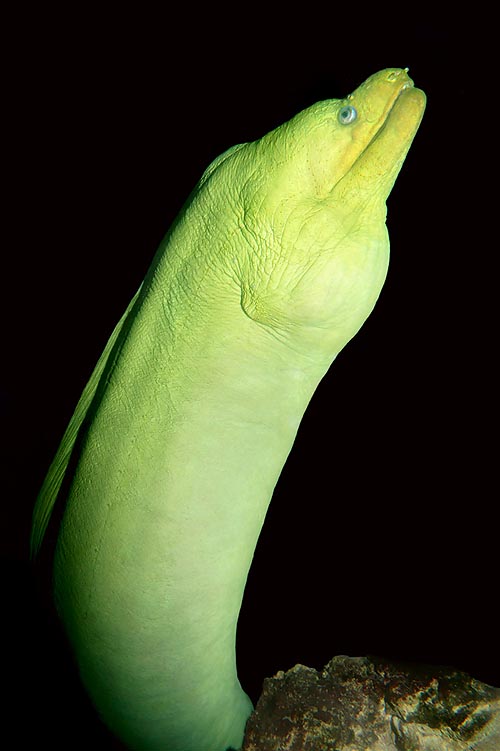 The Green moray (Gymnothorax funebris Ranzani, 1839) belongs to the class of Actinopterygii, to the order of Anguilliformes and to the family of Muraenidae.

The name of the genus comes from the Greek “gymnos” = naked and from the Latin “thorax” = thorax; in other words, this fish has a naked thorax, seen that it has no scales.

The name of the species, “funebris” = funeral, baleful, inauspicious, speaks for itself.

Morays already are frightening, because many, wrongly, assimilate them to the serpents, so, just imagine a more than two metres long monster which may weigh almost thirty kilos!

It is present along the Atlantic American tropical coasts from Florida and Bahamas up to Brazil, but also in the Cape Verde islands and along the coasts of Senegal. Not one knows how, but it has been reported also in California (Sea of Cortez).

It lives amongst the rocks and the recesses of the coral reefs, usually between the 3 and the 30-50 m of depth, but it may be found also in seagrass beds and even in the mangroves formations.

As is customary in the morays, the nostrils form two small tubes and the branchial orifices are reduced to two simple holes, placed at the end of the head, on the prolongation of the mouth. This one, often open, shows off some hooked teeth for holding the preys, and in the oldest specimens the upper jaw may have even two rows of them.

The greenish livery, with yellow shades, is generated by the colour of the mucus secreted as protection against the bacteria and the parasites. Some specimens, especially the young ones, may be brownish or even almost black.

The green moray lives solitary and is active especially during the night. After having spent the day in a well hidden den, it gets out at twilight, looking for fishes, cuttlefishes and various species of crustaceans, which it easily detects thanks to its extremely fine sense of smell. Usually, morays do not attack the man, and when they sight a sub, they burrow immediately. They are not aggressive, but when they feel menaced they know how to defend themselves well. 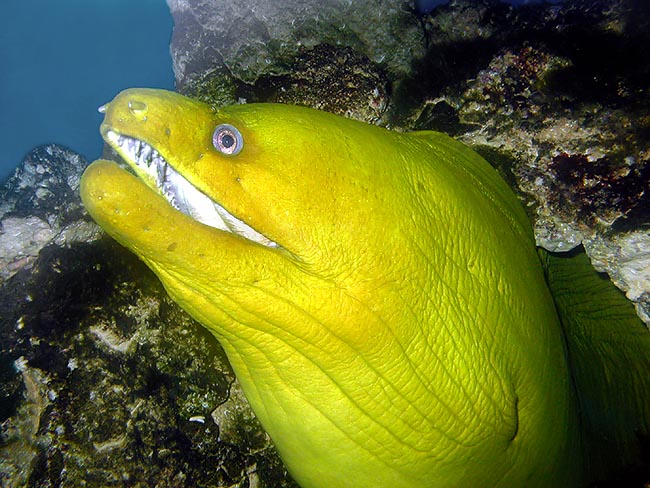 Like the serpents, they take back the head and strike down with force. There is no venom, but, apart from pain and lacerations, the wounds are really true injections of pathogenic agents due to the food substances which are decaying between the teeth. Furthermore, the Gymnothorax funebris is relatively aggressive, and, for the ill-fated, seen its size, there is also the risk of drowning.

Were not this enough, its saliva contains toxic substances, present also in the flesh, coming from a frightening dinoflagellate microalga, the Gambierdiscus toxicus, which lives amongst the corals and produces a much known phycotoxin. The herbivorous fishes, by eating it, accumulate the same into the tissues, and the carnivorous fishes, who predate them, concentrate it, day by day, in their organism. It is obvious that a moray, weighing even more than 20 kg and which has assimilated it for years, becomes uneatable and may cause to the unwary a more or less serious food poisoning, called ciguatera.

The reproduction of the green moray is shrouded in mystery. It is an oviparous species, and we know that the love meetings take place at great depths, around the 400 m. The female spawns and then, immediately, the eggs are fecundated by the male. The larvae, which are transparent, nourish of plankton, and when they reach the 5-10 cm size are flat small fishes, similar to elongated leaves, a bit like what happens to the Eel (Anguilla anguilla ).

When young, the Gymnothorax funebris is a hermaphrodite animal, but later on, under the influence of environmental factors, the sexes define, settling permanently.

The vulnerability index of this species is unfortunately of 83 over 100.