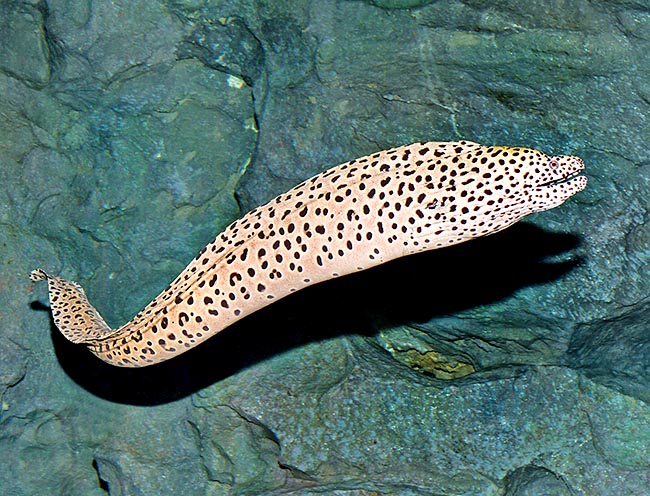 The Spotted moray (Gymnothorax isingteena Richardson, 1845), belongs to the class of Actinopterygii, the ray-finned fishes, to the order of Anguilliformes and to the family of Muraenidae.

The name of the genus Gymnothorax comes from the Greek “gymnos” = naked and from the Latin “thorax” = thorax; it is, in fact, a fish with bare thorax, without scales.

The name of the species isingteena comes from “isingteen”, the vulgar name the Chinese use for this fish.

It is a not much diffused species of the tropical Indo-Pacific. Just to give an idea, we find it at the Comoros, at Mauritius and then in Malaysia, Indonesia and in Australia, up to the southern islands of Japan.

It lives among the madreporic formations and in the cracks of the rocks not beyond the 30 m of depth. 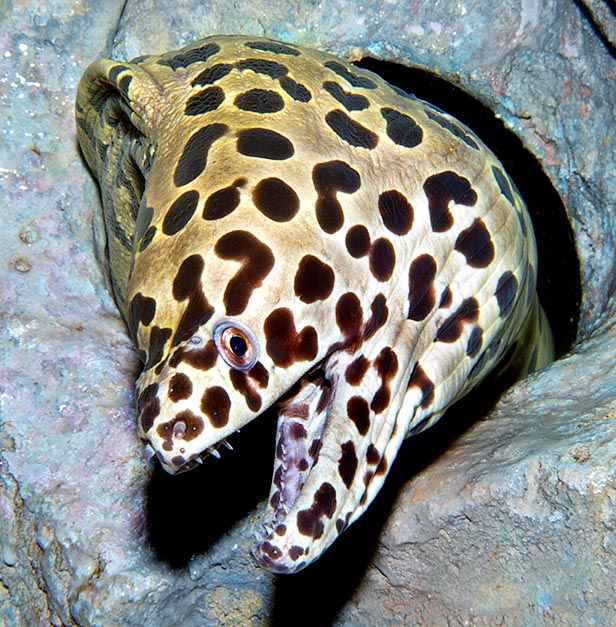 The eyesight is poor, but it has four nostrils for a perfect circulation of the water and of the information. The first two, having the shape of a small tube over the snout, are bent forward and the others, close to the eyes, show only a protruding ring.

The result is an exceptional sense of smell, much more useful than the sight while hunting in the night. The branchial orifices, mimetized among the spots, are reduced to two holes.

The mouth, with an enormous opening, shows also on the palate solid rows of sharp or hooked teeth for holding and tearing the preys.

On the pale brown background stand out countless dark roundish spots which at times touch thus outlining circular or horseshoe-like drawings. They are present, like the Gymnothorax favagineus, also inside the mouth, but it is impossible to mistake it with this species due to the circular and not squared shape of the spots, which do never form reticula, due to the relatively small size and the remarkable distance between them. 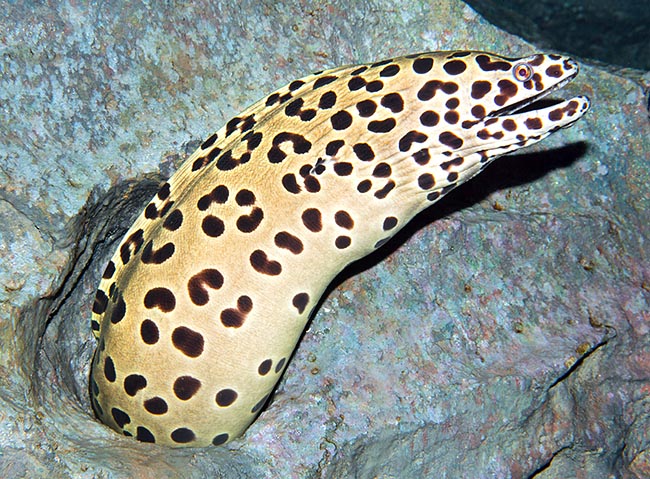 The eggs, after a short ritual where the animals cling, are emitted and fecundated in surface.

The larvae, pelagic and called leptocephali, have the appearance of transparent small stripes shaped like a willow’s leaf. The head is very small and evolutively talking this is a structure showing the archaic character of this group of fishes.

The larval phase is very long; it may last several months, till the animal, assumed a cylindrical shape, does reach the reef.

The growth is slow, and even if it is a little hunted species, it has a high vulnerability risk of 78 on a scale of 100.