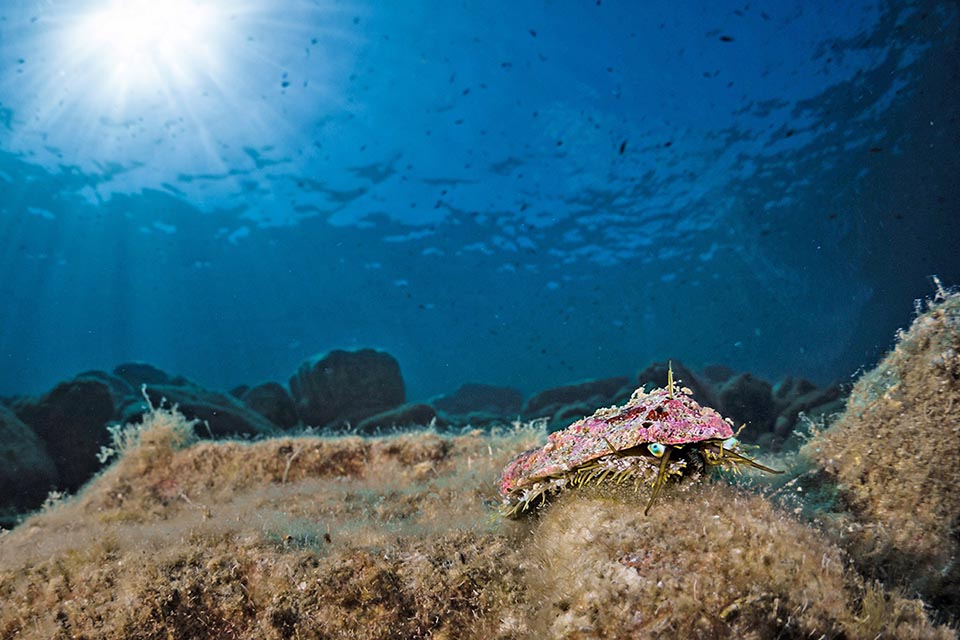 Known as Venus’ ear, St. Peter’s ear or Sea ear, Haliotis tuberculata is a mollusc frequent in the Maditerranean and along the Atlantic coast, from the English Channel to Macaronesia and western Africa, in superficial waters down to 15-20 m of depth. This specimen is grazing on a rocky bottom covered by algae. Capo Noli (Liguria-Italy) © Maurizio Pasi

The 56 species presently recognized in the family Haliotidae are known as “Orecchio di Venere”, “Orecchio di San Pietro” or “Orecchio di mare”, in Italian, “abalone” or “ormer” in English, “ormeaux” in French, “Abulones” or “orejas de mar” in Spanish.

The family is known since the Upper Cretaceous. Many extra-Mediterranean species have a remarkable commercial interest for feeding as well as (especially in the past) for the mother-of-pearl of the shell. Haliotis tuberculata Linnaeus, 1758 is commercially exploited in France, Spain, Italy and, to a lesser extent, in other countries. The species of the family Haliotidae are characterized by a particularly ear-shaped shell (hence its common name) with typical holes recurring spirally.

The name of the genus Haliotis comes from the Greek  ἅλς (salt) and οὖς (ear). The specific epithet tuberculata comes from the Latin “tuberculatus”, with tubercles, with obvious reference to the sculpture of the most common forms, rich in tubercles. 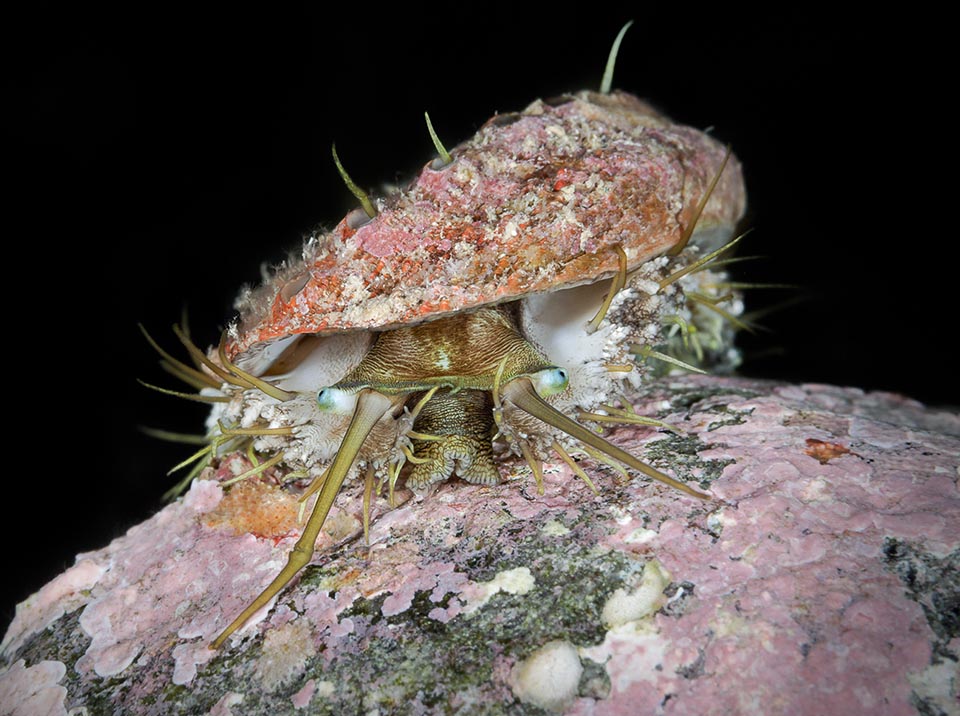 Specimen’s head close-up, always in Capo Noli waters. We can note the eyes at the base of the cephalic tentacles, and the wide foot rich of tentacles. The operculum is absent and the shell, nacreous inside, can be green, green-brown or reddish. With the time it often appears covered by cryptic encrusting organisms © Maurizio Pasi

Haliotidae are distributed on the rocky bottoms of the temperate and tropical seas, from the surface down to about 30 m depth (and therefore are absent where the mobile, sandy or muddy softbottoms are largely predominant on the hard ones, like, for instance, along the north-eastern American coasts as well as the western coasts of the Indian subcontinent. 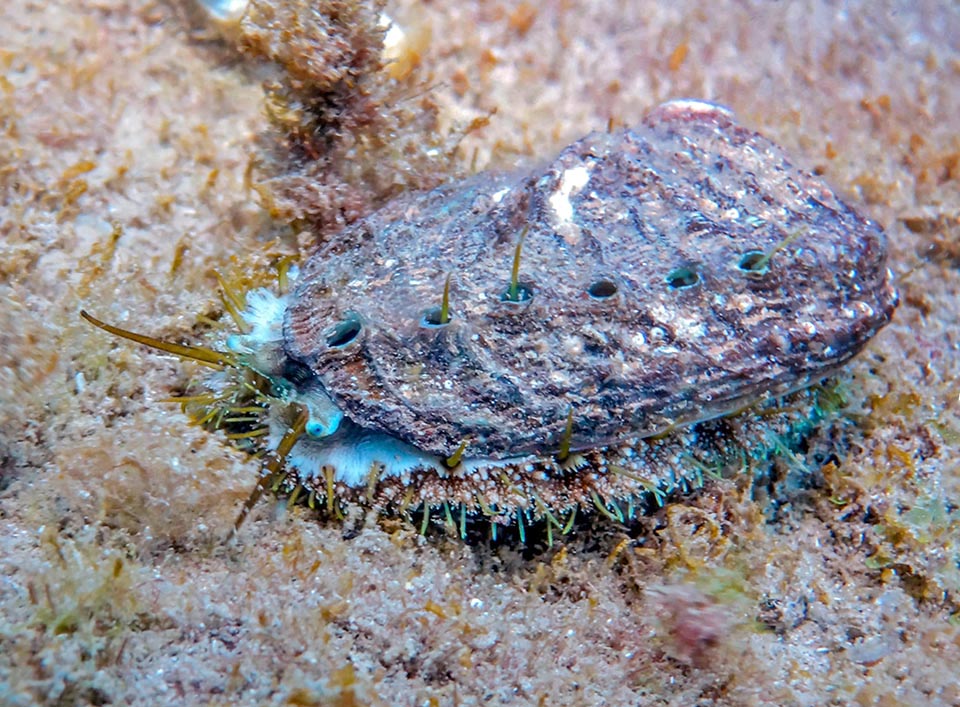 Specimen on a rocky bottom at Boccadasse, Liguria. We must note the shell sculpture, particularly ‘wrinkly’ corresponding to the most typical form, and the exhaling holes, usually 5 to 7, on the shell, from which also some pallial protrude. In Haliotis tuberculata the sexes are separate, and fertilization is external © Francesco Caroli

In the Mediterranean, adult specimens can attain the length of 5-7 cm, but bigger individuals may be found, rarely up to 10-11 cm, more frequent in the Atlantic populations.

The Haliotidae are herbivorous, and most of the species, including Haliotis tuberculata feed mainly on red algae and, to lesser extent, on brown and green algae. The larvae feed on of the vitelline reserves (not of phytoplankton) and the juvenile specimens begin the post metamorphic life feeding on the film of microorganisms, on the surface of the algae of which they will gradually shift to feed while growing.

The shell is endowed of typical holes along the spiral line, that correspond to openings of the underlying pallial cavity, with prevalently exhaling functions. 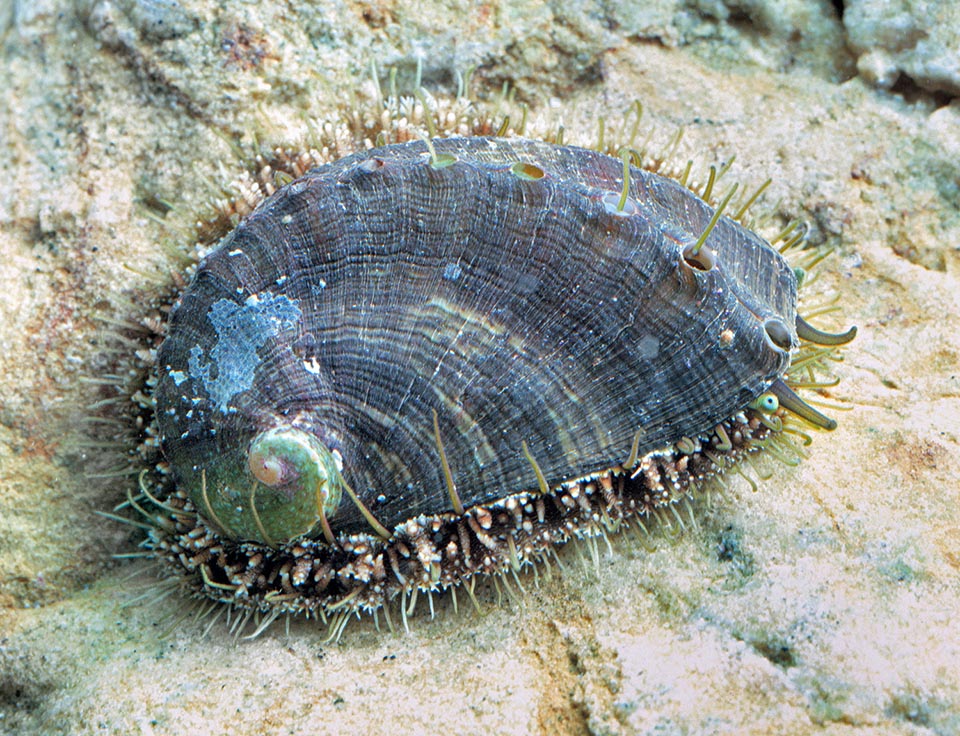 A specimen with very smooth shell, not particularly typical, grazing on a rock covered by algae in the Ligurian sea. Note the evident lateral expansion of the foot © G. Mazza

Haliotis tuberculata has separate sexes and reproduces by external fertilization; at the islands of the English Channel it reproduces in summer, but in the rest of its range the reproductive season might be different, and in the warmest areas it might last even the whole year.

It has a development with a trochophore larva (a sort of small top with an equatorial band of cilia), lecithotrophic (that feeds exclusively of the yolk reserves originally present in the egg) and a phase of planktonic dispersion lasting 3-15 days, the length of time depending on the water temperature.