The Hatiora rosea (Lagerh.) Barthlott (1987) is native to the thick and humid mountain forests of south-eastern Brazil (states of Parana and Rio Grande do Sul), between the 1.000 and the 2.000 metres of altitude.

Its generic name is the anagram of the name of the genus Hariota, dedicated to the botanist Thomas Harriot (1560-1621); the name of the species is the Latin word “rosea” = pinky, with obvious reference to the colour of the flowers.

Epiphytic unarmed plant, ramified, compact, usually with and erect appearance, at times bent or hanging, and up to 30-40 cm tall, it has flat, or with 3 to 6 pronounced ribs in particular at the base, segments, initially reddish, then dark green edged of reddish. The segments are 2-4 cm long and about 1 cm broad, with areoles on the edges provided with thin brownish bristles, as well as the great oblong apical areola from which the flowers and the new segments develop.

The flowers, slightly perfumed and funnel-shaped, stellate, symmetric (actinomorphic), 3-4 cm long and broad, with slightly retroflexed pink petals; the ovary is short and angled. They are produced in abundance, usually singly or coupled at the apex of the junctions, by early spring, roughly therefore by the Easter period in the northern hemisphere, from which come many common names; each one last some days, opening in the morning and closing in the evening, but the plant keeps blooming for some weeks. 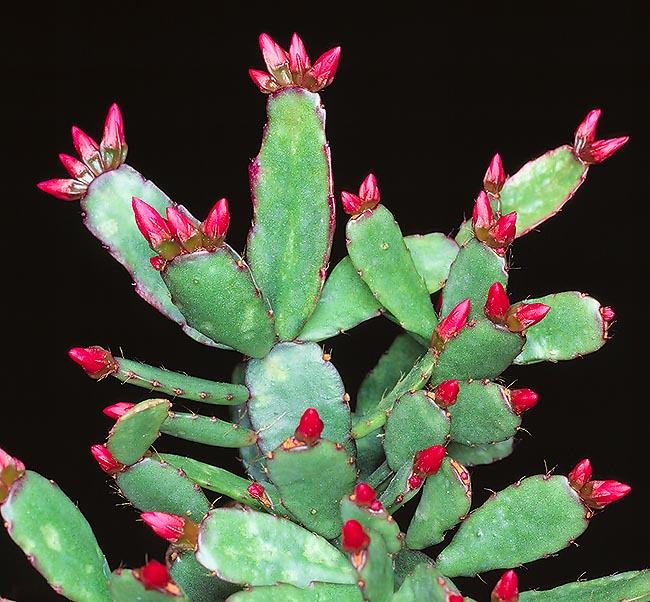 The fruits are globose-depressed, yellowish and slightly angled, containing several brown seeds, but for the fructification the presence of another plant is needed, provided not obtained by division from the same, which has to furnish the pollen; as a matter of fact, the flowers, even if hermaphrodite, are self incompatible. It very easily reproduces by cutting, possibly formed by two segments, well dried for some days and placed to root on a sandy substratum at 20° C; the rooting takes place in about twenty days.

It hybridizes easily with the other species belonging to the genus, the Hatiora gaertneri, which blooms by the same time, with which has given origin to a huge number of cultivars, whose scientific name is Hatiora x graeseri (see photo), all commonly called, in the northern hemisphere (in the relevant languages), Easter cactus: the fact that the two species and their hybrids are known under the same common name is cause of a lot of confusion.

The plant is not very frequent in cultivation, whilst its hybrids and varieties have assumed by the second half of the last century a remarkable importance, also economic, in particular in the northern hemisphere, as flowered plant offered during the Easter period. The plant and its hybrids have the same requirements of cultivation. They require high diffused luminosity, but not direct sun, and sub-acid, perfectly draining and much aerated substrata, as the roots are very sensitive to the rottenness due to humidity stagnation, substrata which may be formed by common garden earth, mould of leaves or, missing this, rough peat and siliceous sand, or agri perlite, in equal parts, in case needed, with addition of crushed stones for improving the draining. Their permanent collocation in open air, in a shady position, as epiphytes on the trees or in suspended pots, is limited to the climates characterized by high atmospheric humidity and minimum winter temperatures usually over the +10° C, even if, when dry, they can bear, for a very short time, temperatures just under the 0° C.

Elsewhere, they are to be cultivated in pot in order to shelter them in winter, moving them outside, if this is possible, from late spring to autumn. In summer they are to be regularly watered, allowing only the first layers of the compound to dry up between the irrigations and nebulising with not calcareous water if in presence of too dry air; in winter watering must be reduced, but keeping the compound always slightly humid and the lowest temperatures close, but not inferior, to the +10° C, this period, drier and cooler, helps in the next abundant blooming. After that the floral buds have appeared, displacements as well as sudden changes of environmental conditions are to be avoided, as these changes might cause their fall. The light fertilizations are to be done about twice a month from the appearance of the buds till the autumn.

The plant is inscribed in the appendix II of the CITES (plant whose trade is ruled at international level).

Hatiora rosea was last modified: May 8th, 2018 by Giuseppe Mazza