The name of the genus comes from the Latin “Heliconius, a, um” = of the Helicon, mountain sacred to Apollo and to the Muses in the Greek mythology; the name of the species is the Latin adjective “hirsutus, a, um” = hirsute, shaggy, with reference to the hirsute rachis.

The inflorescence, on a 10-30 cm long peduncle, is an erect, 6-15 cm long, terminal spike, with thin rachis, slightly wavy covered by thick down, formed by 4-10 alternate bracts, distichous, concave and long pointed, coriaceous, of orange to red colour, long at the base 7-12 cm, decreasing progressively towards the top, which subtend 6-10 tubular flowers, 2,5-4 cm long, of yellow or orange colour with a dark green spot at the apex, on an about 1 cm long pubescent pedicel. The symmetrically bilateral flowers are hermaphroditic, with 3 sepals, two of which merged and one free, and 3 petals fused together, little differentiated between each other, 5 fertile stamina and one staminode opposite to the free sepal; the flowers are pollinated by the hummingbirds. In the bracts are present extra-floral nectars which exude a sugary substance that attracts various species of ants. The fruits are globose drupes, of about 0,8 cm of diameter, of dark blue colour, containing 1-3 seeds.

It reproduces by seed, previously kept in water for 2 days to soften the tegument, in organic loam with addition of siliceous sand or agri-perlite for a 30%, maintained humid at the temperature of 26-28 °C, with germination times varying up to 6 months, but the division of rhizomes is usually and easily used.

The Heliconia hirsuta is one of the most diffused and variable species of the genus, of which have been selected numerous varieties much appreciated for the ease of cultivation, the relatively contained dimensions, the re-flowering and the coloured long-lasting inflorescences, and for this reason frequently utilized in parks and gardens even if of modest extension. It requires high temperatures and atmospheric humidity, therefore is suitable only for the tropical and subtropical regions, an exposition in full sun or slightly shaded and soils rich of organic substance, acidic or neutral, draining, kept constantly humid, but without stagnations. It well adapts to the cultivation in pot, where it flowers easily, utilizing a particularly draining and aerated organic substratum, it can be therefore recovered in greenhouses, verandas or very luminous winter gardens, where the climate does not allow the permanence in open air during the winter times, with night lowest values of temperature not under the 15 °C. The watering must be regular and abundant in summer, allowing the substratum to partially dry up before giving water again, avoiding the stagnations, cause of easy rottenness, more spaced in winter, but without allowing the substratum to dry up completely, and the fertilizations done preferably with slow releasing balanced products with addition of microelements. It is easily subject to mites and mealy bugs attacks, to be treated, in case of serious infestation, with specific products. 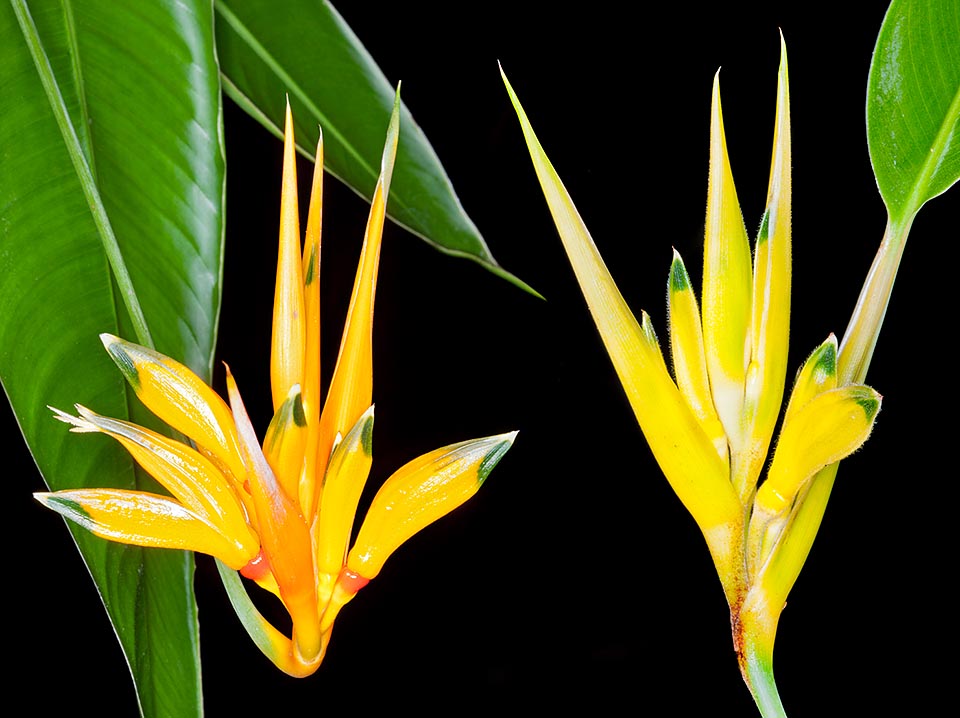 Numerous varieties have been selected, among which ‘Halloween’, left, and ‘Yellow Panama’, right © Giuseppe Mazza

The leaves are locally used for wrapping foods and the cut inflorescences, long lasting, are utilized in the floral compositions.