The species is native to Colombia, Costa Rica, Ecuador and Panama where it lives in the pluvial forests in open areas.

The Heliconia vaginalis Benth. (1846) is an evergreen, perennial rhizomatous erect herbaceous species forming 1-3 m tall dense tufts. The leaves, on a petiole sheathing the pseudo-stem at the base of the leaf, are basal, alternate, distichous, simple, entire, oblong-elliptic with long pointed apex and central nervation prominent in the lower page, 0,3-1 m long and 8-20 cm broad, dark green on top, paler below, and sheathing tubular foliar bases forming a pseudo-stem.

The inflorescence, on an up to about 15 cm long peduncle, is an erect terminal spike, about 20 cm long, with slightly waved rachis and 6-9 bracts with pointed apex, distichous, coriaceous, of red colour, up to about 12 cm long at the base and progressively decreasing upwards. The bracts subtend numerous 4-5,5 cm long tubular flowers of yellow colour with greenish apex, on an about 1 cm long yellow pedicel with the border of the ovary green, opening in succession. The flowers, with bilateral symmetry, are hermaphroditic, with 3 sepals, two of which merged and one free, and 3 petals fused together, little differentiated between them, 5 fertile stamina and one staminode opposite to the free sepal; the flowers are pollinated by the hummingbirds. The fruits are sub-globose drupes truncated at the apex, of about 1 cm of length and diameter, of initially green colour, then purple blue when ripe, containing 1-3 seeds. 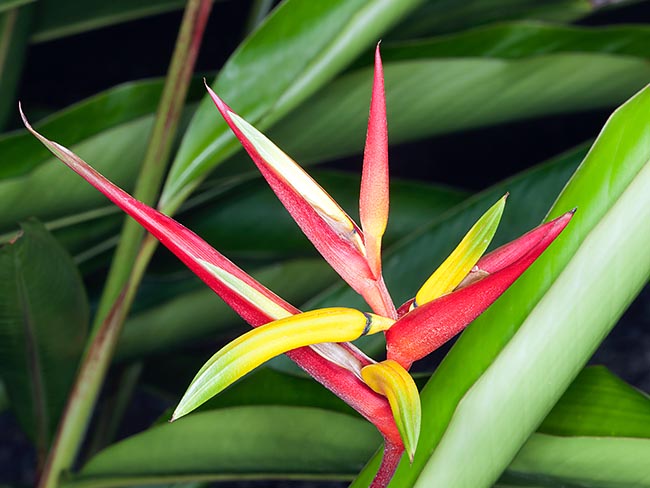 It reproduces by seed, previously scarified and kept in water for 3 days to soften the tegument, in organic loam with addition of siliceous sand or agri-perlite for a 30%, maintained humid at the temperature of 26-28 °C, with variable germination times, from some months to one year, but usually and easily by division of the rhizomes in spring, with each section provided with several vegetative buds.

Rather variable species, as per shape and size of the inflorescence, of undoubted ornamental characteristics, but relatively little diffused in cultivation, utilizable in humid tropical and subtropical climate zones in group or for edges, in full sun or partial shade, on soils rich of organic substance, acidic or neutral, well draining, maintained almost constantly humid, but without stagnations.

Elsewhere, it can be cultivated in capacious pots in order to be sheltered in the winter months in greenhouses, verandas or luminous winter gardens, using an organic substratum with addition of siliceous sand or perlite for a 30% to improve the drainage, with high ambient temperature and winter day temperatures of 20-24 °C and lowest night ones not under the 15 °C. The watering must be regular and abundant in summer, avoiding stagnations, cause of easy rottenness, more spaced in winter, allowing the substratum to partially dry up before giving water again, with fertilizations done preferably with slow-releasing balanced products with addition of microelements. The cut inflorescences, long-lasting, are suitable for being utilized in the floral compositions.