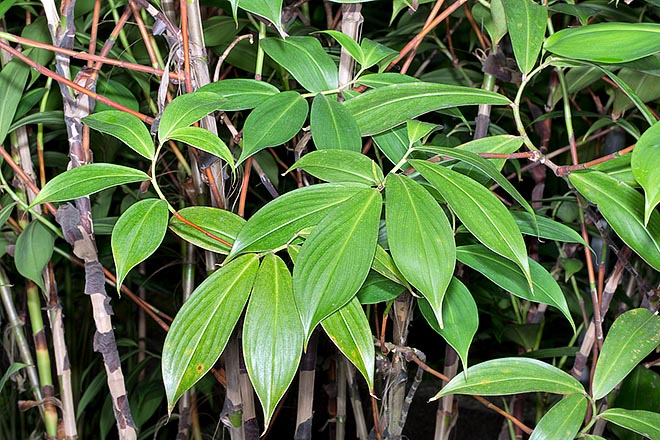 The species is native to Borneo, Java, Peninsular Malaysia, Sumatra and Thailand, where it grows in the pluvial forests, mainly in the valleys, in swampy zones and along the water streams up to about 1200 m of altitude.

The genus is honoured to the Finnish botanist and zoologist Carl Niclas Hellenius (1745-1840), who assumed the name of Carl Niclas von Hellens after having been ennobled; the specific name is the Latin adjective “globosus, a, um” = globose, with reference to the shape of the inflorescence.

The Hellenia globosa (Blume) S. R. Dutta (2010) is an evergreen, perennial rhizomatous herbaceous species with up to about 3 m long stems and 2 cm of diameter, ramified above with thin branches, of about 0,6 cm of diameter, spirally curved. Simple sub-sessile unilateral leaves, entire, oblanceolate with long poined apex, 6-18 cm long and 3-6 cm broad, of intense green colour above, paler and pubescent below. 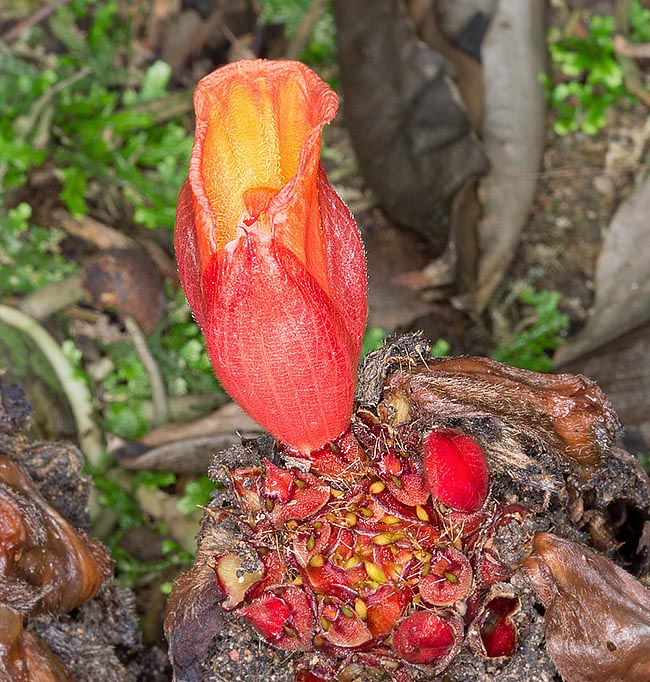 The inflorescence is radical and comes at soil level among the underwood leaves with a 5-12 cm peduncle. The hermaphroditic flowers have yellow orange or orange red colours. Rhizomes are used for various pathologies © Giuseppe Mazza

The fruit is a dehiscent capsule with triangular section containing several black seeds with white aril.

It reproduces by seed in draining organic loam, maintained humid at the temperature of 24-26 °C, but usually and easily by division.

Vigorous and fast growing species suitable for being cultivated in parks and gardens of the tropical and humid subtropical climate zones, not bearing temperatures close to 0 °C.

Where the climate does not allow its permanent cultivation in open air, it may be cultivated in pot, to be sheltered during the coldest months in greenhouses, verandahs and winter gardens, with temperatures over the 15 °C, utilizing a substratum rich of humus with addition of siliceous sand or agri-perlite per a 30%.

The waterings must be regular and abundant in summer, more reduced in winter, but without ever allowing the loam to dry up completely; in presence of dry air are useful the nebulizations with non-calcareous water in order to avoid antiaesthetic spots on the leaves. The rhizomes are utilized by the local populations in the traditional medicine for various pathologies.