The etymology of the genus comes from the Greek “hèmi” (half) and “skylla” (a type of shark), hence “a half shark”, due to the size and the characteristics of the fish, whilst the name of the species, “freycineti” has been given in honour to the Admiral Louis de Freycinet, famous navigator and explorer. The common name “epaulet” (spallina in Italian), present in various languages, attributed also to other similar sharks, comes from the black spot with white margin on the “shoulder”, like rightly a military epaulet. 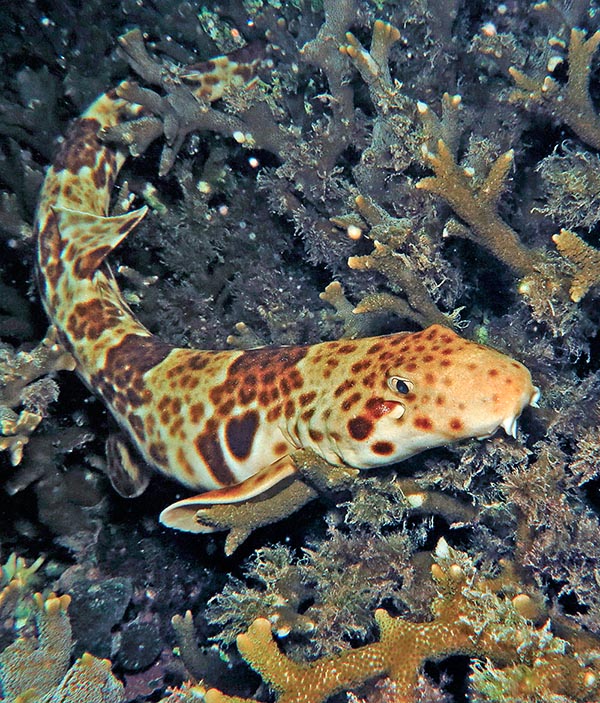 The Indonesian speckled carpetshark (Hemiscyllium freycineti), endemic to Irian Java, can be seen only by night, when it gets out from inaccessible dens looking for anellids, fishes, crustaceans and molluscs © Sebastiano Guido

It is a shark present only on the north-western coast of the Indonesian province of Westerb New Guinea (former Irian Jaya) and in the Raja Ampat Islands.

The Hemiscyllium freycineti lives in the shallow and protected waters of the reefs, where it hides during the day to get out in the evening to scour the reef and the seagrass meadows looking for the small animals that hide there.

Usually it does not venture at depths over the 12 metres and it is possible to find it in cliff ponds where it can resist, even when the tide lowers and the little remaining water is poorly oxygenated, reducing for some hours the non-essential body functions.

The maximum reported length is of 72 cm, distributed along a very elongated body with cylindrical section, more of half of it being formed by the caudal peduncle and by the tail.

The skin, of yellowish white colour, is adorned with leopard spots arranged irregularly to form alternated clear and dark bands. Just over and behind the gills, (on the “shoulders”) a big dark heart-shaped shield, with white contours distinguishes it as a “private first class” soldier of the next army of selachians.

Excepting the first dorsal fin having two more angled tips, the other fins are rounded at the extremity. The two pectorals, well-muscled, are utlized by the fish for “walking” on the bottom.

The short snout is rounded and ends with short barbles surmounting the nostrils, placed in turn over the small mouth. The eyes, somewhat protrudent have an oval pupil slightly oblique. Under each of them opens a spiracle of the same size as the eye, that has the function of helping the breathing of the fish when it immerses the snout into the bottom looking for food.

The teeth, wide at the base, end with small triangular cuspids. Like all sharks, the jaw is internally covered by a thin layer of tesserae, crystalline exagonal plates that strengthen the bone of the cartilaginous jaws, equating their sturdiness to that of the jaws of the same-sized osteichthyans of the same size. This artifice allows the selachians to have a strong bite without increasing the weight of their body. 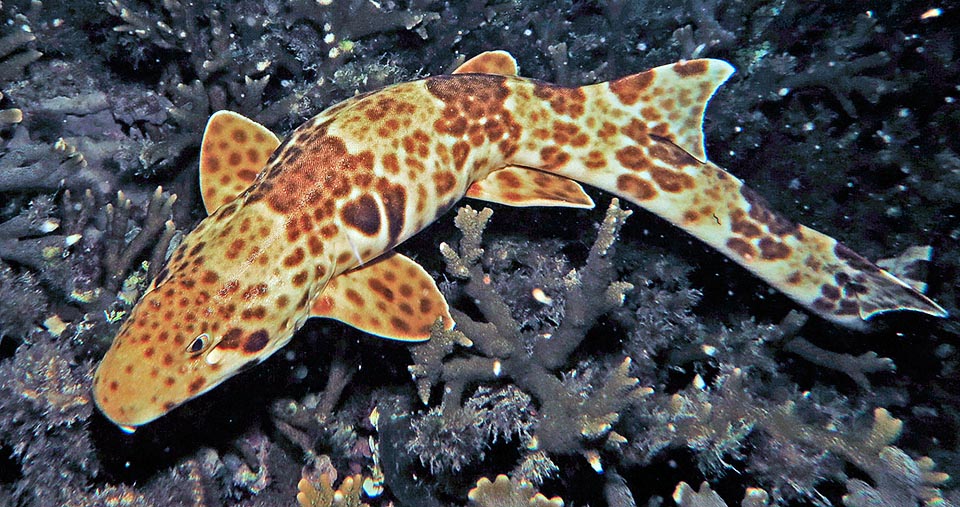 It does no exceed 72 cm and has close to the gills a big dark heart-shaped shield with white contours, similar to a military epaulet, as states the vulgar name © S. Guido

Timid and harmless, can be met alone only by night, when it leaves those inaccessible hollows where it hides during the day. It might happen to meet it also during the day in case it should be caught, due to the tidal withdrawal, in a tide pool. During the night, dazzled by a lamp, it keeps motionless relying on the mimetic mantle ready to dart away with a rapid sudden movement upon the first suspicion of having been discovered.

Its set of teeth betrays the kind of preys it hunts: usually annelids, fishes, crustaceans and molluscs the strong teeth manage to overcome even when provided of shell. Unlikely almost all sharks, that, once cut a bite gulp it, our small friend chews good part of the food it consumes.

Like all selachians, the keen sense of smell and the electroreceptors of the ampullae of Lorenzini help it greatly when looking for the preys, often hidden into the substratum of the bottom. 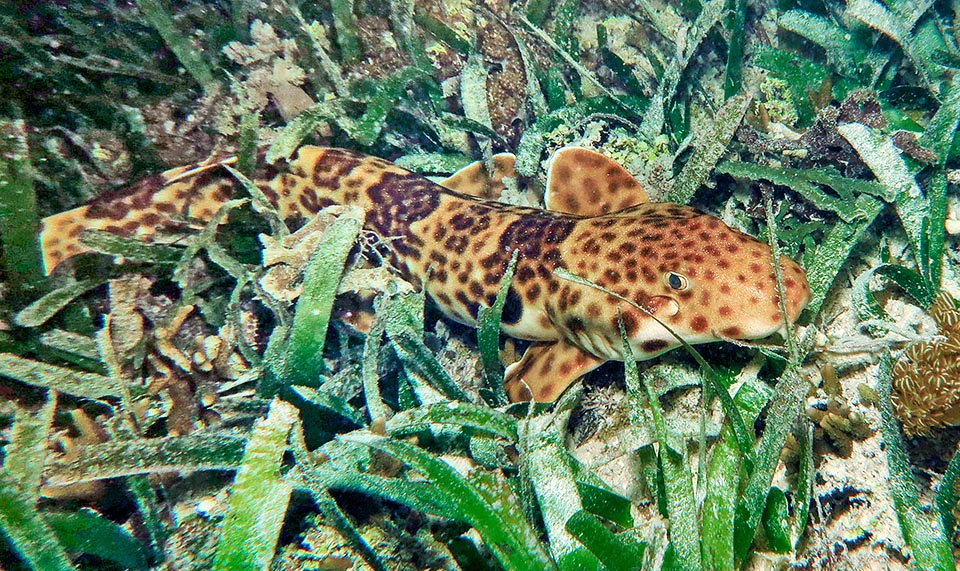 Shy and harmless for the man, it moves in shallow waters, never under the 12 m of depth, and at times gets trapped into the cliff ponds. It frequents the underwater prairies, rich of preys it chews, unusual thing for a shark, breaking shells and carapaces. The females are oviparous and lay several 10 cm caskets © Sebastiano Guido

It’s an oviparous animal and for mating the male grabs the female for a fin or a gill, holding it for a couple of minutes. The female will lay some tens of eggs, contained in caskets of about 10 centimetres, that will anchor on the bottom with thin filaments and after a hundred or little more days will open getting out the thin small shark, same as the parents, but not longer than a few centimetres.

The growth is very slow and the young will reach the sexual maturity after about seven years of life. The resilience of the species is low and the time of doubling of the population may vary from 4 and a half years to 14. The vulnerabililty index is surprisingly low for a shark, marking 31 (2017) on a range of 100.

Hemiscyllium freycineti was last modified: May 3rd, 2022 by admin