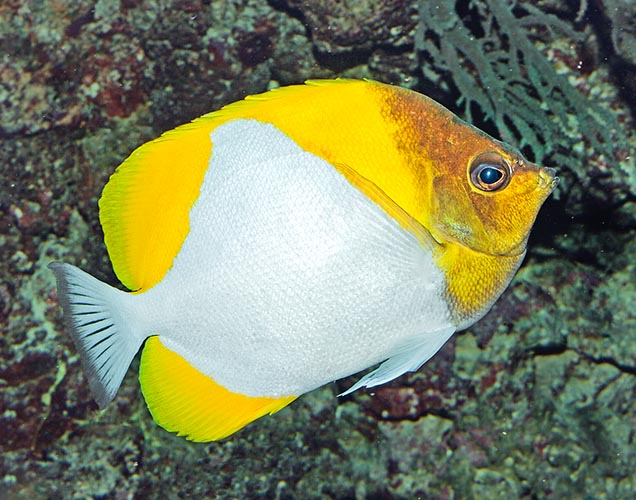 Hemitaurichthys polylepis is an atypical butterflyfish living in crowded schools on the reefs border © G. Mazza

The unusual and showy Pyramid butter- flyfish (Hemitaurichthys polylepis Bleeker, 1857) belongs to the class of Actinopterygii, the ray-finned fishes, to the order of Perciformes and to the family of the Chaetodontidae.

The name of the genus “Hemitaurichthys” comes from the Greek “hemi” = half, “taureia” = bull skin and “ichthys” = fish. But what do bulls have to do with it? Perhaps the white pattern, squared, evokes a half skin of bull and it seems that Bleeker should have also considered the Malaysian appellation of “ikan-karbauw”, which means “buffalo fish”.

The name of the species “polylepis” comes from the Greek “polys” = much and “lepis” = scale, flake, with reference to the numerous scales.

It is present in the tropical waters of the Pacific, but, mostly, in the Indian Ocean.

Just to give an idea, we find it at the Andaman Islands, Christmas Island, in Malaysia, Australia, Indonesia, New Guinea, Micronesia, New Caledonia, Philippines, Taiwan and China up to southern Japan. Southward, it reaches Easter Island, eastward, the Kiribati islands, the Hawaii and Cocos Island.

It lives in the madrepores formations up to 40 m of depth, but on the outer borders of the reefs, in the midst of the currents.

The pyramid butterflysh can reach the 18 cm. The body is flat, more or less squared, with slightly elongated snout. 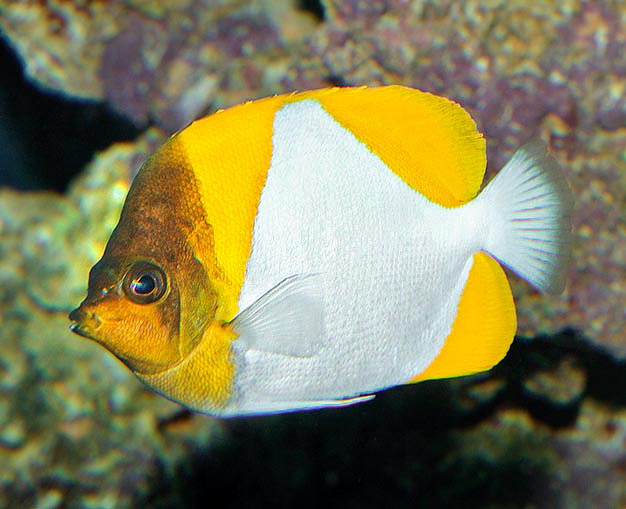 On the yellow background stands out a white pyramid in the middle of the body which extends up to the tail and to the ventral fins. This is the main characteristic of the species, which has suggested the common name of pyramid butterflyfish in various countries.

For once, the eye is not camouflaged by a black band, but it is true that there is a facial mask, of brown colour, darker towards the back.

The Hemitaurichthys polylepis has a decidedly atypical behaviour with respect to the usual butterflyfishes: it does not live in sheltered zones among the madrepores, but in the midst of the currents which carry the zooplankton which it eats, and, above all, it does not swim alone or in small groups, but in crowded schools.

It is not territorial because the food is abundant and can calmly eat all the day long without bothering the congeners. After the fecundation, which is not collective, but is a couple affairs, the parents entrust the eggs to the currents.

The populations can double in less than 15 months and seen that these fishes have a diet based on wandering organisms, they are less dependant than the corals from the climate changes, the vulnerability index of the species is very low: just the 15 per 100.