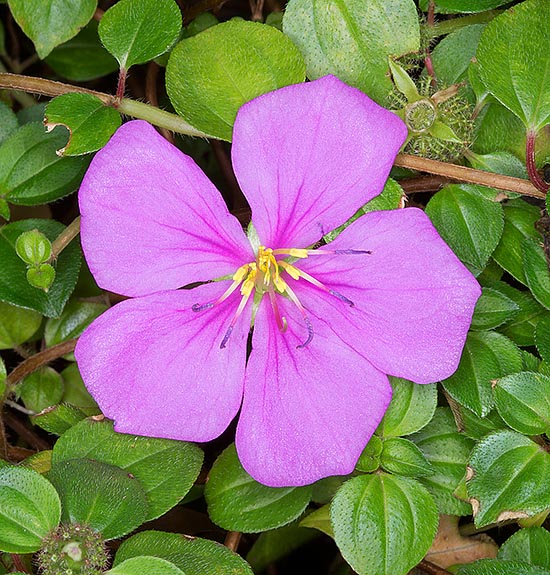 This plant is native to tropical Africa (Angola, Cameroon, Democratic Republic of the Congo, Equatorial Guinea, Ethiopia, Ghana, Guinea, Guinea-Bissau, Ivory Coast, Kenya, Liberia, Malawi, Mozambique, Nigeria, Sierra Leone, Tanzania, Togo, Uganda, Zambia and Zimbabwe), where it grows in the swamps, in the humid forests and along the water streams, up to 1200 m of altitude.

The name of the genus comes from the Greek “héteros” = different, with reference to the unequal stamina; the name of the species is the combination of the Latin words “rotundus” = round, rounded, and “folium” = leaf, with obvious reference.

The Heterotis rotundifolia (Sm.) Jacq.-Fél. (1981) is a perennial shrub with quadrangular, hairy, 60-90 cm long, stems, ascending or prostrate and rooting at the nodes, at times woody at the base.

The leaves are opposite, ovate or elliptic with sharp apex, 2-7 cm long and 1-4 cm broad, thickly pubescent on both pages, dark green on the upper one and pale green below, with 3-5 venations departing from the base and ciliate edges.

The flowers are terminal, solitary, with five, about 2 cm long and 1,5 cm broad, pale mauve to dark purple, petals with unequal stamina, the longest ones being lavender coloured and the shortest being yellow. The fruits are globose, about 1 cm long, covered by thin, 2-4 mm long, green tubercles, containing 1 mm long seeds. It reproduces by seed, cutting and, easily, by division. Introduced in several tropical countries as ornamental plant, it has naturalized becoming, in some instances, a pest.

Fast growing species and continuously flowering for most of the year, it is particularly suitable for being utilized as soil cover on well drained, neutral or slightly acidic soils to be kept constantly humid, in the tropical and subtropical climate zones, as it withstands temperatures of a few degrees below 0 °C only for a short time. The best exposition is in full sun, but it adapts also to the light shade, even if with a less abundant flowering. It is cultivable also in pot, in particular in the suspended ones, in a soil rich of humus with addition of siliceous sand, by around the 30%, in order to improve the draining. The tisane of leaves is utilized in the traditional medicine for various pathologies.