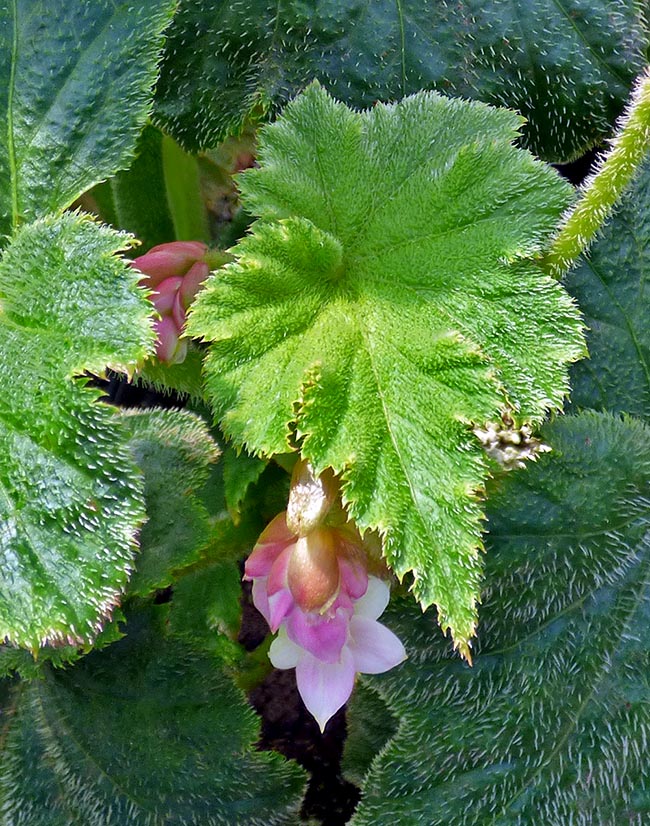 Hillebrandia is a genus of dicotyledon plants with the only one species Hillebrandia sandwicensis Oliv., endemic to the Hawaiian islands, that nowadays is present only in three islands, Kauai, Maui and Molokai, whilst it has disappeared from the island of Oahu where it was present on the Mount Ka’ala by the end of the XIX century.

It is a very shade tolerant species and lives in humid and deep ravines, close to waterfalls, under the canopy of the dense pluvial forest, at altitudes between 900 and 1.800 m, but is becoming increasingly rare.

Therefore, the need arises to insert it in the “Red List” of the International Union for Conservation of Nature (IUCN), in order to be able to protect it against anthropic actions.

Hillebrandia sandwicensis was described in 1866 by the English botanist Daniel Oliver (1830-1916), librarian at the herbarium of the Royal Botanic Gardens in Kew and professor at the University College of London.

He dedicated the genus to Wilhelm Hillebrand, German physician and botanist, great connoisseur of the Hawaiian flora.

The specific name comes from the Sandwich Islands, old name of the Hawaii Islands.

Common names: the native Hawaiian name is pua-maka-nui, literally, “The flower with the great eyes”, due to its great and showy flowers; on the island of Kauai, it is called ala-aka-awa.

Phylogenetic analyses suggest that Hillebrandia is the first ramified member of the Begoniaceae is, therefore, the twin group of Begonia, but seen that there is no fossil evidence available, with the molecular techniques of datation, it is admitted that the genus Hillebrandia may have an age of about 24,6 million of years, consequently, much older than the average age, about 15-20 million of years, of the Hawaiian Islands.

Hence, it is probable that the ancestor of H. sandwicensis was born elsewhere and then, through a casual and rare event of a long-range dispersion, starting from Africa, via a Malay-Pacific way, did arrive in the oldest Hawaiian islands and later pon from one island to the other up to the present younger ones.

For the dispersion, it has been hypothesized the transportation of the seeds by means of the wind or through the birds thanks to the mud adhering to the legs.

However, these habitats are little frequented by migratory birds and, even if the closed pluvial forest does not favour the long range dispersion, the anemochorous dispersion seems to be the most probable seen the morphology of the seeds, that are very small (‘seeds of powder’). 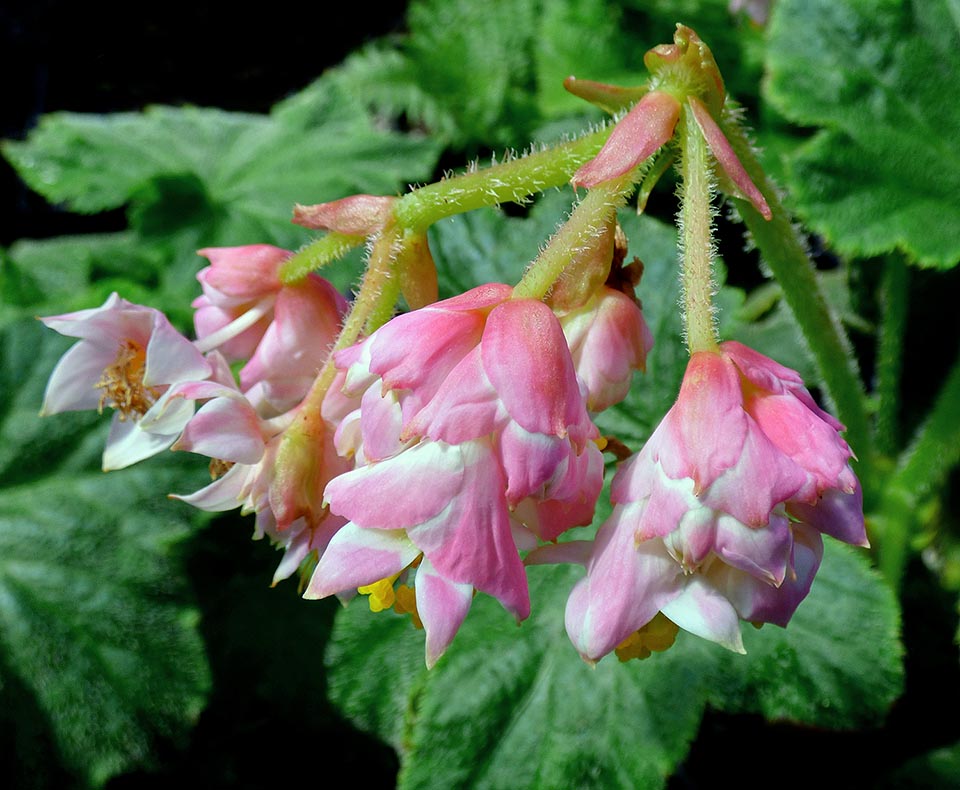 From the morphological point of view, H. sandwicensis is like Begonia, but with differences in the structure of the flower, in the morphology of the pollen and of the fruits.

H. sandwicensis is a monoecious herbaceous species with fleshy ramified one metre tall stems rising from underground rhizomes. The leaves are borne by long petioles and are slightly asymmetric, trilobate, hairy, with palmate veins, of glossy green colour.

The flowers take form from February to June and are white or pink, unisexual, actinomorphic, with (4)-5 sepals and (4)-5 petals borne by cymose inflorescences. The male flowers have many anthers with characteristic dehiscence through lateral septa. The female flowers have a semi-inferior ovary, globose, 5-locular, surmounted by 4 or 5 styles, alternative to petals, bifurcated at the apex, with continuous helicoid band and of stigmatic tissue. The anthers are pendulous capsules that, when ripe, through pores, release very small (ca. 0,4 mm long) seeds. After having produced the fruits, in the summer season, the aerial part of the plant dies but thanks to the perennial rhizomes reforms annually.

It does not seem that the primitive Hawaiians used Hillebrandia, though a great part of the medicinal tradition of the old Hawaii islands does not exist anymore.