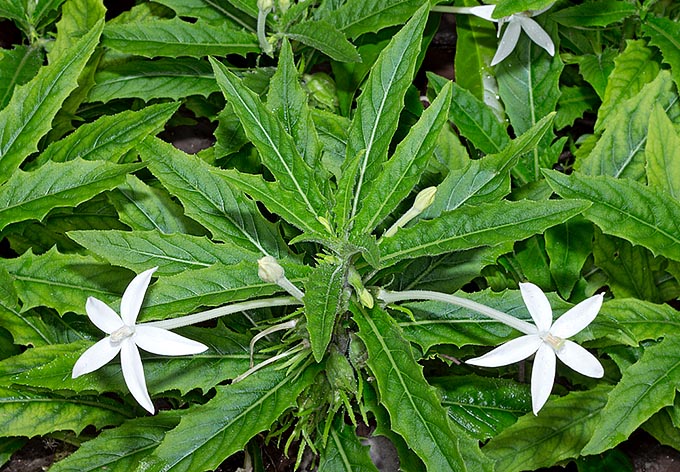 Native to Jamaica, Hippobroma longiflora has naturalized in the tropics as ornamental plant © Giuseppe Mazza

The species is native to Jamaica, where lives in open areas, often at the margins of water streams, but naturalized in various tropical countries.

The Hippobroma longiflora (L.) G.Don (1834) is a perennial herbaceous species with erect or at times decumbent stem, little ramified, 20-60 cm tall, with whitish fleshy roots and milky sap, with quite unpleasant smell. The leaves are simple, alternate, subsessile, elliptic to obovate-lanceolate with irregularly toothed margins and pointed apex, 5-15 cm long and 1-3,5 cm broad, almost glabrous above, slightly villous below, with prominent nervations. The flowers, at the axil of the upper leaves on a 1,5 cm long peduncle, are solitary, erect, perfumed, with penta-parted calyx with ciliate and indented segments, 0,8-2 cm long, of green colour, hypocrateriform white corolla (with extended lobes perpendicular to a long thin tube) with cylindrical tube, 6-12 cm long and of 0,4 cm of diameter, villous, and 5 elliptic to lanceolate lobes with pointed apex, 1,5-2,5 cm long and 0,5 cm broad, staminal tube that juts about 0,5 cm out from the corolla. 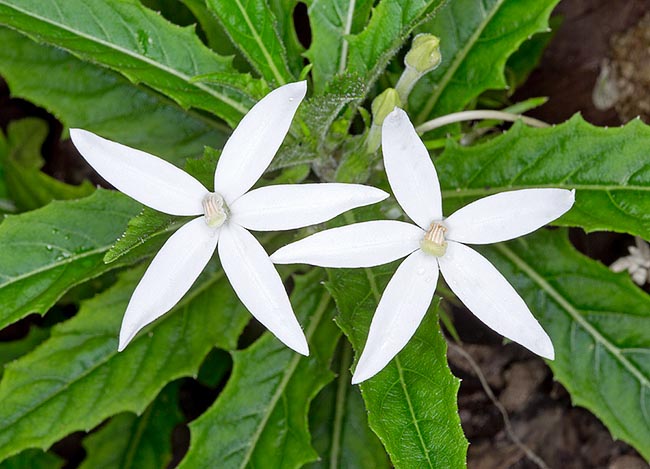 Unluckily it's highly poisonus, even to the touch, and can become invasive © Giuseppe Mazza

The pollination, seen the morphology of the flower, is done by moths of the family of the Sphingidae (Latreille, 1802). The fuits are ellipsoid or obovoid bilicular capsules, villous, 1-1,5 cm long and of 0,8-1,2 cm of diameter, containing several seeds almost ovoid, 0,7 mm long, of pale brown colour. It easily reproduces by seed.

Very ornamental species thanks to the white scented flowers, but amongst the most poisonous, to be handled with extreme caution due to the presence in its sap of substances highly irritant for contact with immediate effects, in the eyes may cause blindness and on the skin serious allergic reactions, fatal cases are reported due to prolonged contact; the use of gloves is therefore indispen- sable when handling it. If ingested is highly poisonus because of the presence of cardioactive alkaloids, such as the lobelanidine, that may quickly lead to death. Rarely utilized in minimal doses in the traditional medicine, with effects that, in some cases, have been fatal.

It grows in the tropical and humid subtropical climate zones, where has naturalized escaping the cultivation and becoming in some cases invasive, in full sun as well as partially shaded and is not particular about the soil, even if poor.

It is reported here only to facilitate its identification, its cultivation is strongly discouraged due to its invasiveness and, especially, its high toxicity.

→ To appreciate the biodiversity within the CAMPANULACEAE family and find other species, please click here.