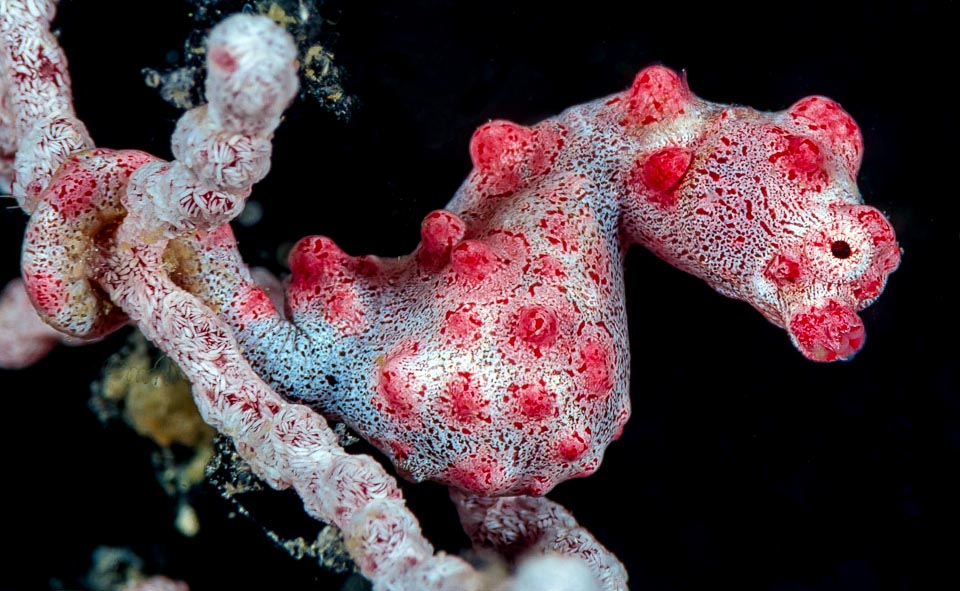 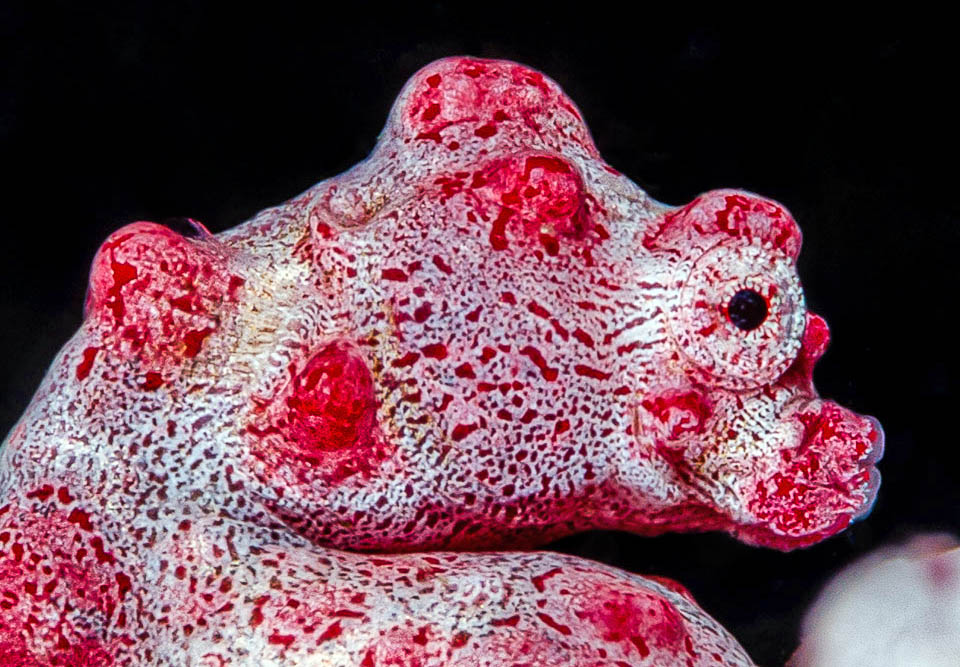 The Pygmy seahorse or Bargibant’s seahorse (Hippocampus bargibanti Whitley, 1970) belongs to the class of the Actinopterygii, the ray-finned fishes, to the order of the Syngnathiformes and to the family of the Syngnathidae, that of the pipefishes and of the seahorses, mainly marine species but with some members also in the fresh and brackish waters. 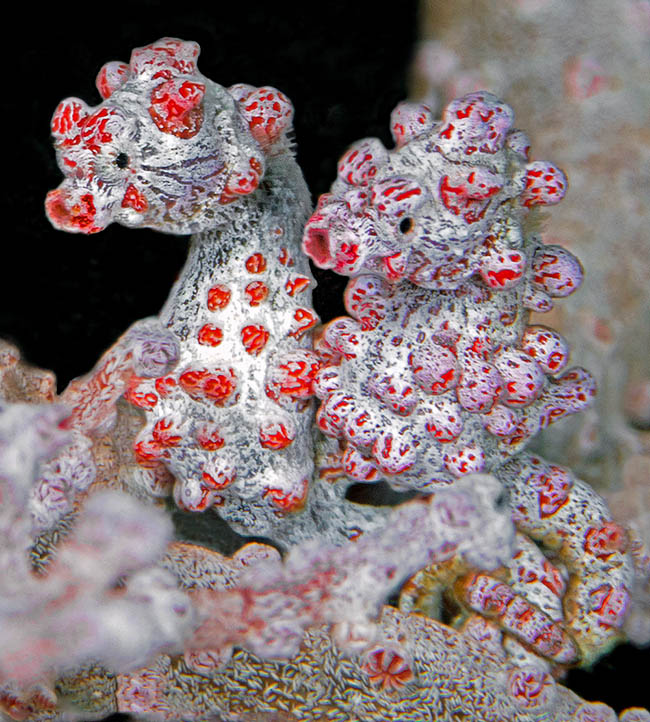 A couple. Female is the slender one whilst male has the belly swollen by the pouch intended for the incubation of eggs. Whilst in the other seahorses and much smaller, placed close to the tail, here, proportionally, is enormous © Karen Honeycutt

The genus Hippocampus originates from the old Greek “ἵππος” (hippós), horse, and “κλίσις” (kampé), curvature, with allusion to the back of this mythological fish-tailed horse, depicted together with tritons, dragons and other marine monsters in Poseidon’s cortege.

The specific term bargibanti, of Bargibant in Latin, honours Georges Bargibant, the New Guinean researcher who by chance discovered it in a laboratory, in 1969, stuck to the gorgonian of the genus Muricella he was dissecting.

Hippocampus bargibanti lives in the western Indo-Pacific. Starting eastwards from Indonesia and Malaysia, we find it along the coasts of Australia, in Papua New Guinea, in the Solomon Islands, Vanuatu and in New Caledonia.

Northwards, after the Philippines, it reaches the Ryukyu Islands, Ogasawara and Japan.

The Pygmy seahorse is a non-migratory species present between the 16 and the 40 m of depth, camouflaged between the branches of the gorgonians.

There are two variations of colour: the form pale grey or violet, with pink or red tubercles, usually found on Muricella plectana and the yellow one, with orange tubercles, associated with Muricella paraplectana.

The young are less selective, and in the early days, during their growth, they often anchor, provisionally, on other species. 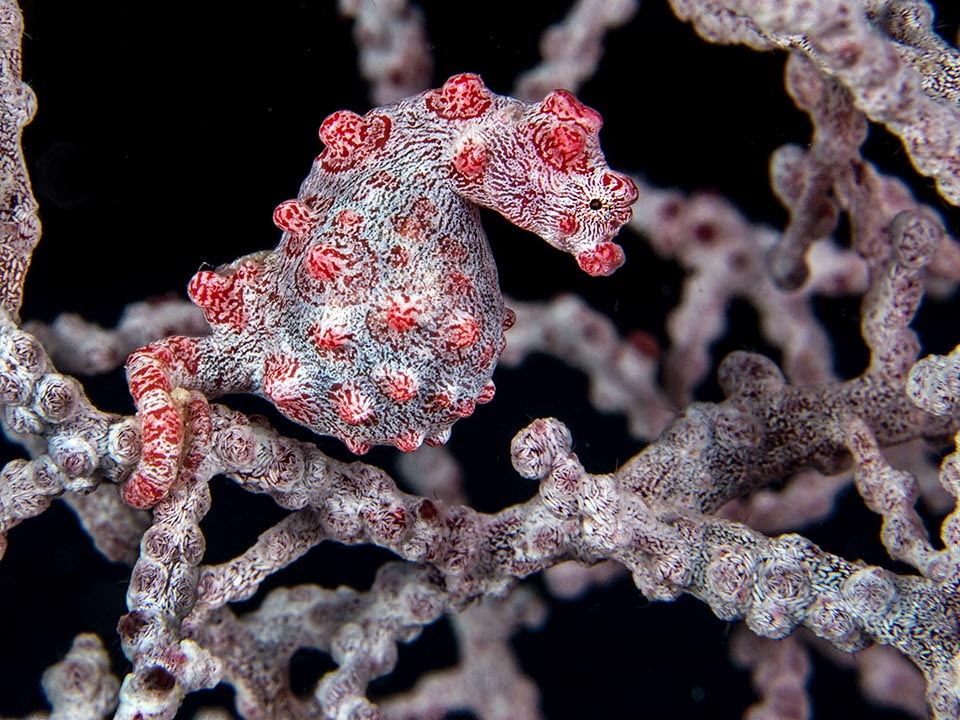 Two forms exist. The pale grey or violet lives on Muricella plectana. The pink or red tubercles imitate the host closed polyps and the body the stem © Alex Varani 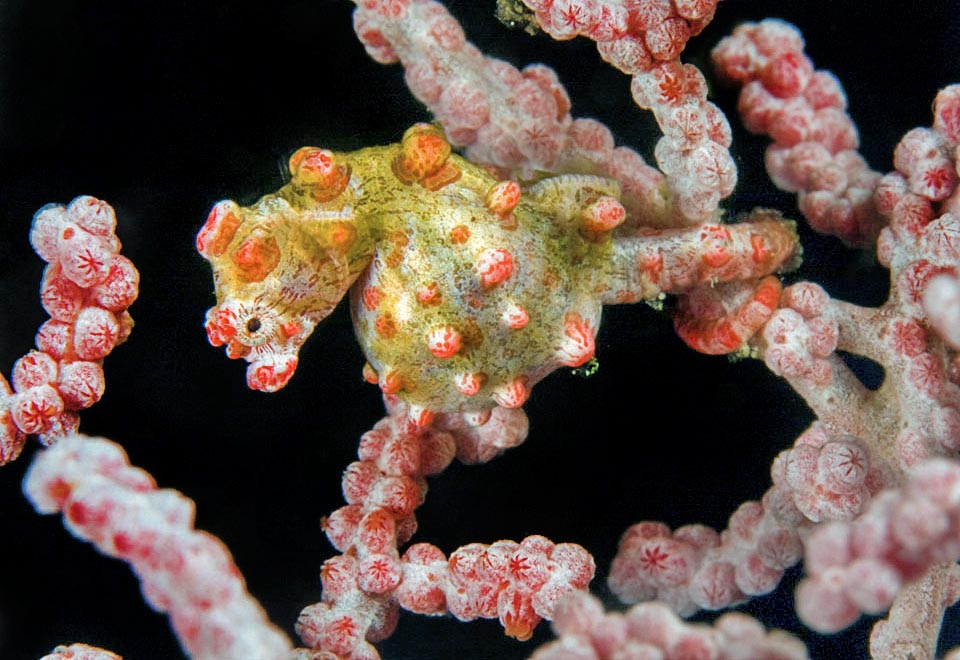 Hippocampus bargibanti rarely exceeds 2 cm. This small fleshy fish, without scales or plates, should be an easy bite for the predators, but the defense is guaranteed by its incredible mimetic capacity. In fact, it presents several tubercles that mimic the polyps of the host gorgonian, whilst the colour and the drawing of the body recall the stem. 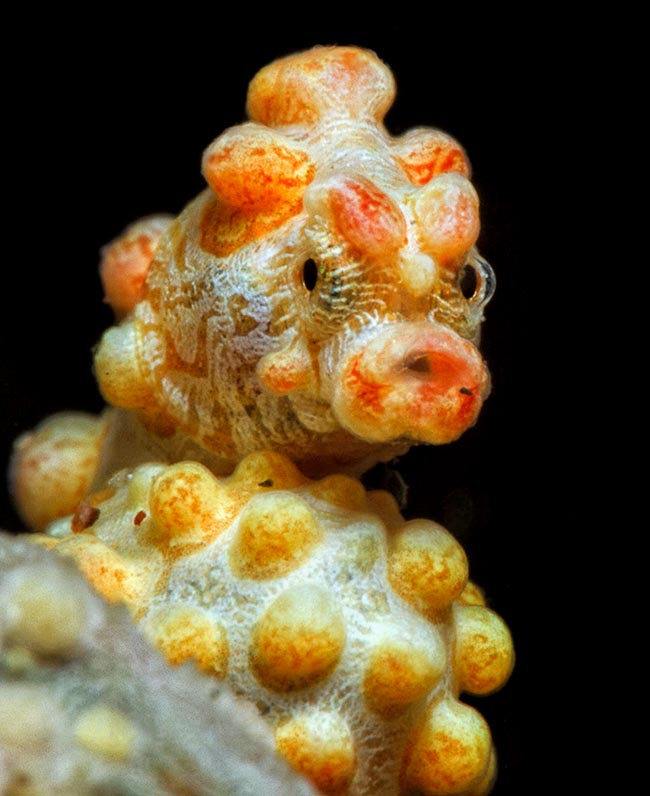 Compared to other species of seahorses, the snout is very short, and the tubercles of the head form an odd coronet.

We note tiny spines on the cheeks and near the eyes.

Their eyesight is excellent.

The eyes can move independently, like the chameleons, for a complete vision of the surroundings, or for granting a binocular vision perfect for evaluating the distances.

The tail is prehensile, made to firmly attach to the support or to the partner while mating.

The fins are reduced to a minimum, the dorsal has 13-15 soft rays and the pectorals 10.

As easily imaginable, the Pygmy seahorse is consequently a very bad swimmer. It slowly moves vertically with rapid fluctuations of the dorsal and once found its gorgonian will never leave it anymore.

It seems that the couplings occur only in these two species of Muricella and so, at the end, a well-placed ramification can host even 28 couples, usually stable.

Pygmy seahorse eats mainly alive animals moving close to it or transported by the currents.

It hunts amphipods, copepods and other microscopic crustaceans, without leaving behind, passing by, the eggs and the larvae carried by the currents, aspirated by the rapid movement of the protractile mouth.

The reproductive period of the Hippocampus bargibanti Pygmy seahorse is very ample. For instance, in Australia, but winter, matings take place all over the year. 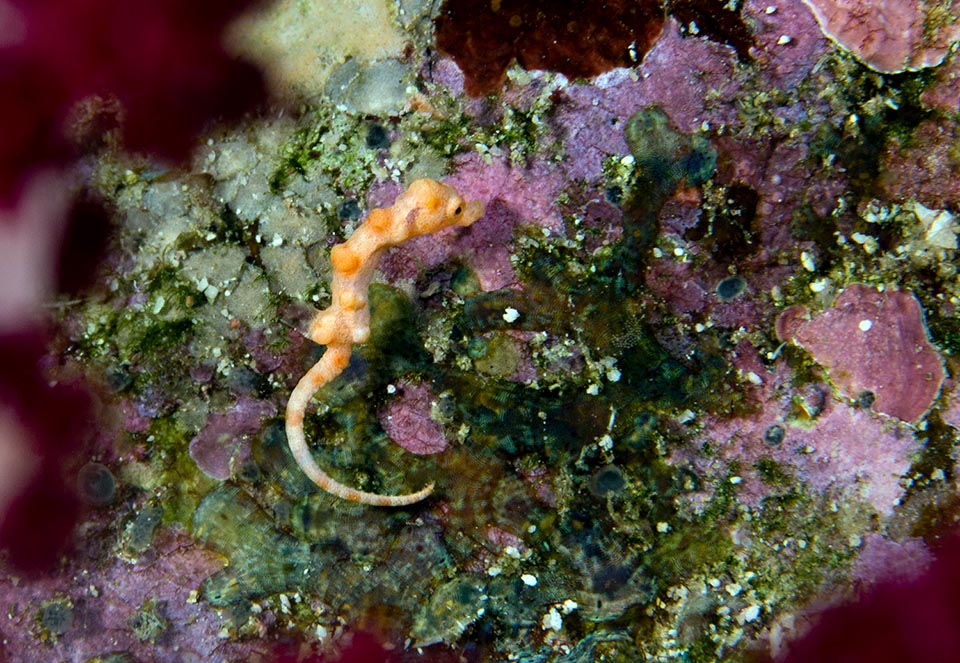 A young looking for its gorgonian. The male can deliver, repeatedly, even 34 already self-sufficient fry © Silke Baron

The males have a big ventral incubating pouch, quite rich in blood capillaries for oxygenating the larvae.

Unlike the other seahorses carrying this pouch at the base of the tail, in the tiny Hippocampus bargibanti, observed at sea while delivering 34 creatures, occupies almost all the belly and the swelling is noted even if it is not full of eggs. 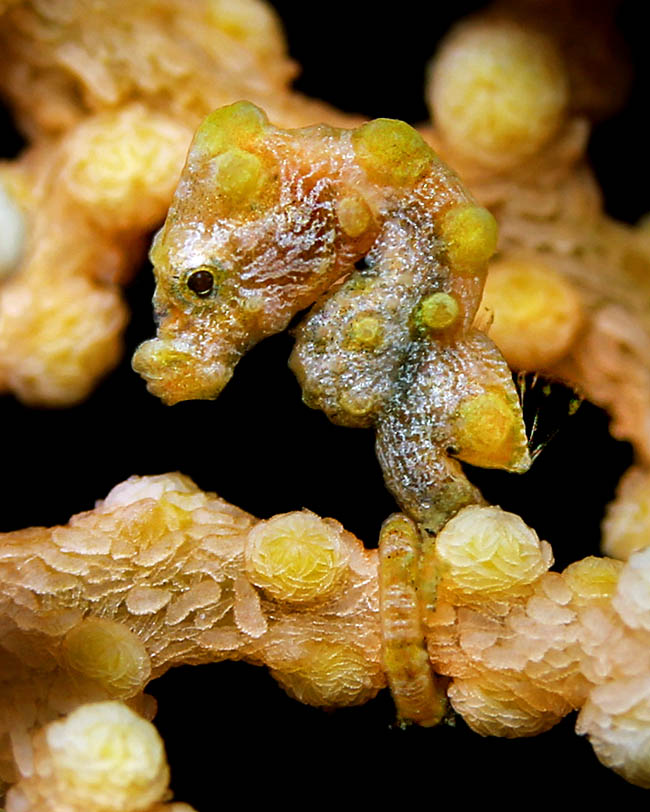 This one, rather older, has found its Muricella paraplectana where it will spend all its life. The ramifications of a Muricella well exposed to the currents may host even 28 couples © Michael Fineberg – divingaround.asi

Conversely, the females are much slenderer, apart from a modest swelling close to the tail due to the presence of the eggs during the reproductive period.

These ones, as happens in all seahorses, are then introduced with the ovipositor into the pouch of the male at the time of the fecundation.

The gestation lasts on average two weeks and the fry, already autonomous and very similar to the adults, are ejected a little at a time with successive contractions.

The resilience of the species is good and is possible a doubling of the populations in less than 15 months.

The Pygmy seahorse is however present in the “Red List” of the endangered species, carefully labelled as “data deficient”.

As a matter of fact, we do not have precise data about the life of this tiny animal due to the difficulty of observing it at sea and possible confusions with other dwarf relatively similar seahorses, even if associated to different environments or species.

For instance, Hippocampus colemani usually living in the seagrass meadows; Hippocampus waleananus that frequents the soft corals; Hippocampus satomiae present on alcyonarians and hydrozoans; Hippocampus pontohi also linked to the hydrozoans or Hippocampus minotaur that distinguishes because its wider neck, taurine, as stated by its scientific name.

And it is not by chance that the whole genus Hippocampus appears in the Appendix II of the International Trade Convention of wild flora and fauna species threatened by extinction (CITES) that limits and regulates international trade. 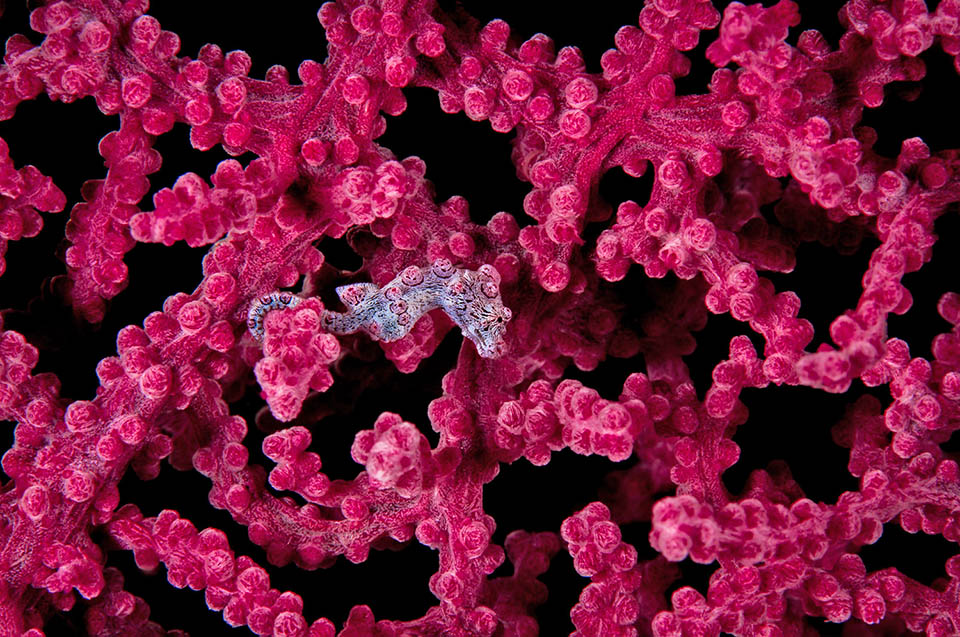 This instead is adapting the tubercles to the other species. Even if shown in the Red List as “data deficient”, Hippocampus bargibanti does not seem nowadays in danger © Christian Kullenbo

Albeit attractive, however, Hippocampus bargibanti is not hunted by man as it cannot live in an aquarium. The numerous attempts on this matter, done by skilled hands in the large public aquaria, have all concluded in fact miserably, with the death of the seahorses and of the gorgonians that hosted them.

Hippocampus bargibanti was last modified: May 5th, 2022 by Peppino