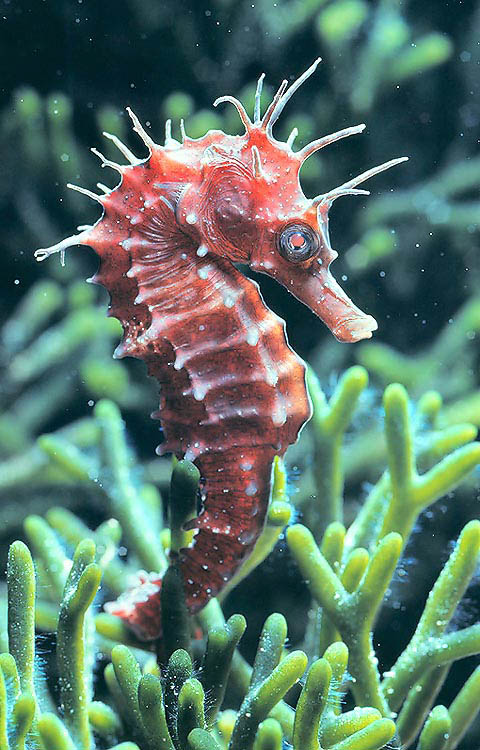 The Long-snouted seahorse (Hippocampus guttulatus) is present along the coasts of the Mediterranean and of East Atlantic, from the British Islands up to Senegal © Giuseppe Mazza

The Long-snouted seahorse or Spiny seahorse  (Hippocampus guttulatus Cuvier, 1829), to distinguish it from the Hippocampus hippocampus (Linnaeus, 1758), the so-called Short-snouted seahorse with almost overlapping range and the short snout, belongs to the class of the Actinopterygii, the ray-finned fishes, to the order of the Syngnathiformes and to the family of the Syngnathidae, that if the pipefishes and of the seahorses, that presently, in 2022, counts 58 genera and 307 species.

They are mainly marine fishes, with some members in the fresh waters and some species, like Hippocampus guttulatus, may be found also in brackish waters.

The genus Hippocampus originates from the old Greek “ἵππος” (hippós), horse, and “κλίσις” (kampé), curvature, with allusion to the head having a decidedly equine appearance, tilted ninety degrees with respect to the body, with mane-like growths and that long and cylindrical snout, born from the jaws joined together, typical to all the Syngnathiformes apart the adults of the genus Bulbonaricus that, like Bulbonaricus brauni lose it during their development.

Surely an elegant and unusual look that since the old times has fascinated man. It is the mythical fishtail horse, shown in the cortege of Poseidon with tritons, dragons and other sea monsters.

The specific term guttulatus, with some drops in Latin, finally underlines the tiny mimetic pale speckling scattered on the body.

Hippocampus guttulatus is present along all Mediterranean coasts but can be found also on eastern Atlantic, from the British islands and Holland up to Macaronesia, Morocco and Senegal.

Furthermore, the Long-snouted seahorse is present in the Black Sea, with a smaller size shape, but belonging to this species as shown by recent molecular studies. 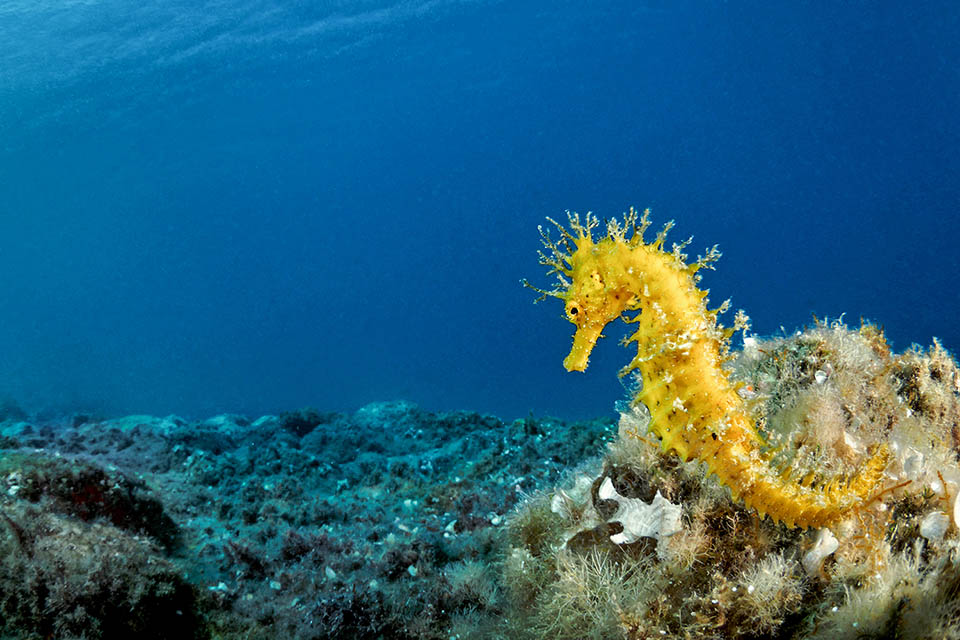 It can reach the height of 16-18 cm, with a record of 21,5 cm. The colour goes from brown to greenish black, but there are specimens of bright live yellow, orange or red © Maurizio Pasi

The long-snouted seahorse is a sedentary fish, and it could not be otherwise because it is a very bad swimmer, usually present in the seagrass meadows, between 1 and 20 m of depth, stuck with its prehensile tail to the leaves of the Posidonia oceanica and other phanerogams of the genus Zostera. 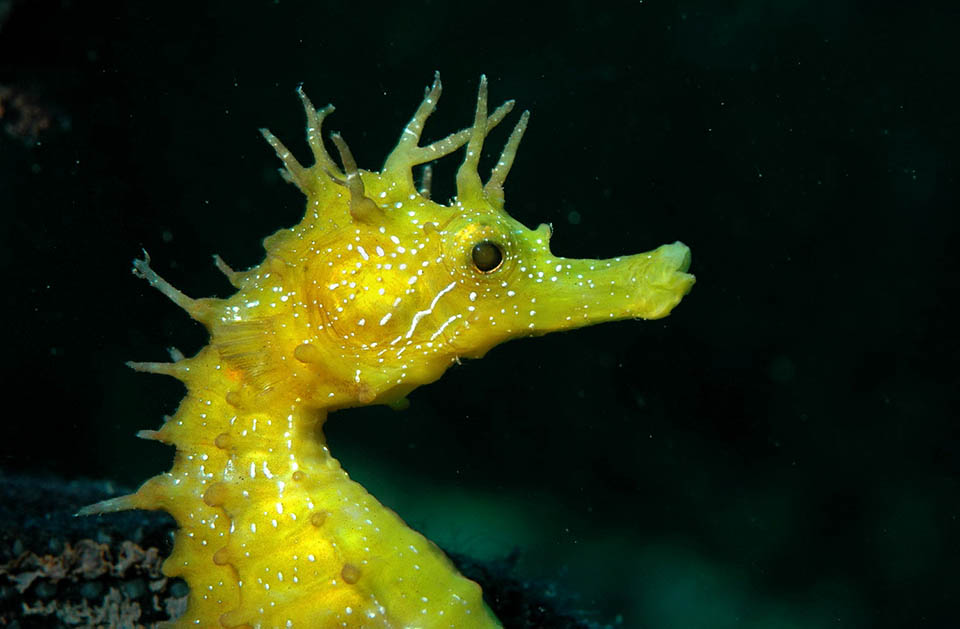 The equine look is due to the head rotated 90° respect to the body, mimetic mane and the particularly long snout distinguishing it from the other Mediterranean species © Nicolas Laissus

Also the seaweeds covering the coastal rocks can offer it good support and during the winter it often goes down in coralligenous environments reaching, exceptionally, the 40 m of depth.

Conversely, it is poorly frequent on the mobile sediments, being this environment typical to Hippocampus hippocampus,  similar species easy to recognize for the short snout as well as for the absence of skin appendages. 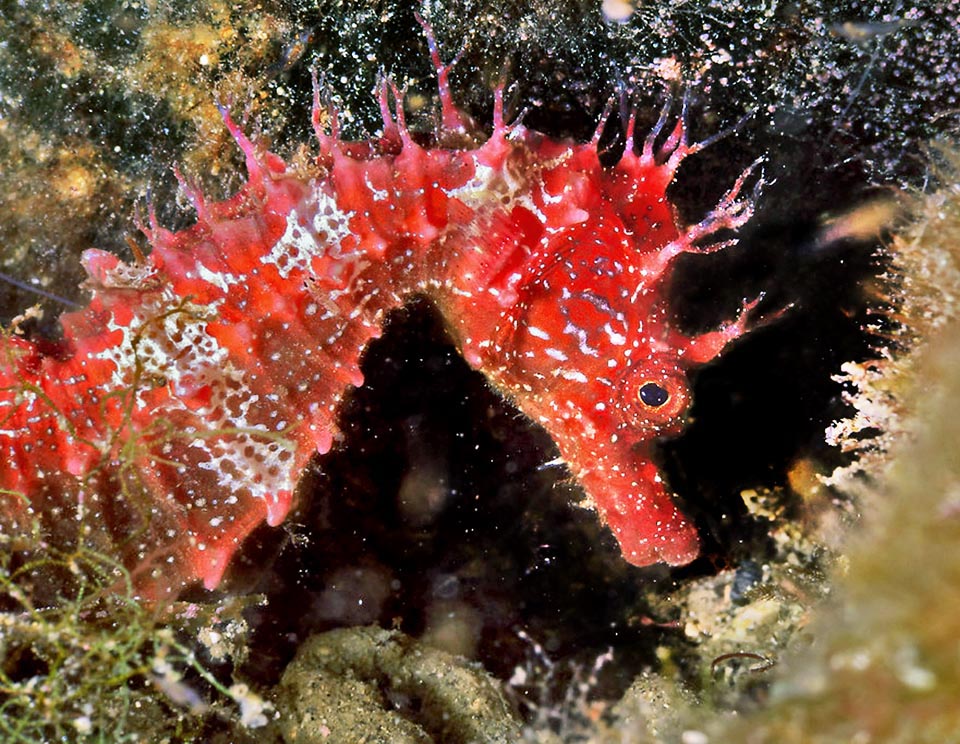 Hippocampus guttulatus can be 16-18 cm tall, with the males slightly larger and a record for these of 21,5 cm.

Like all seahorses also the Long-snouted seahorse has no scales, and the body is armoured under the skin by bony plates. It has 48-50 rings in all of which 10-11 concerning the trunk. 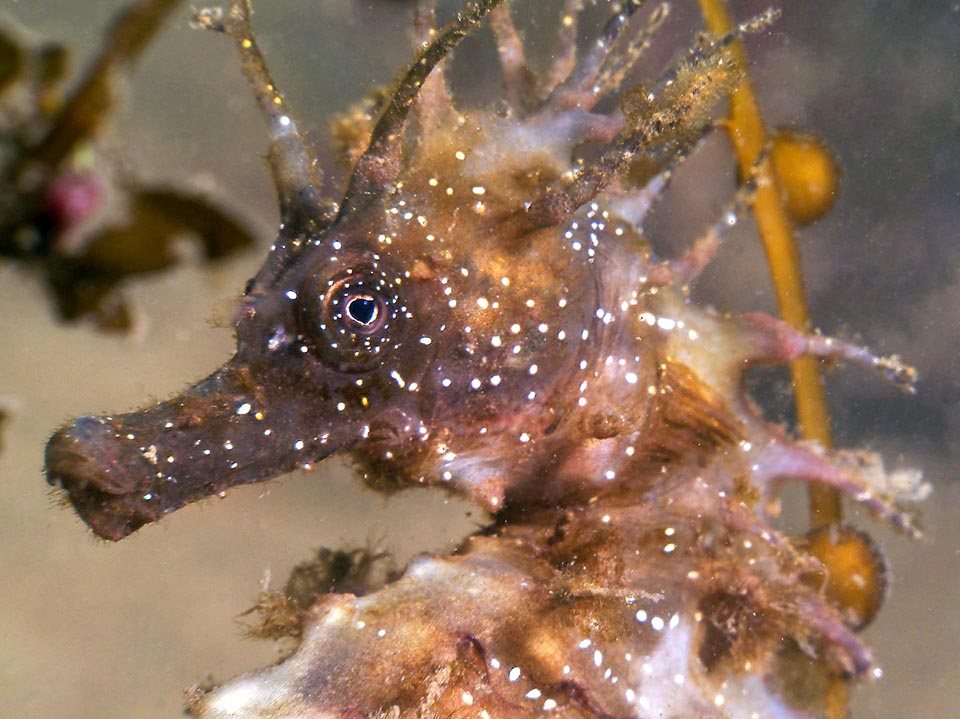 The head has a concave pentagonal crown formed by two horns in the four corners and three on the back. The mouth is toothless and the tiny prey are sucked whole © Carlos Fernandez-Cid

The big eyes, circular, can move independently with an ample vision of the surroundings, or can line up for a perfect binocular vision that allows them to well evaluate the distances. 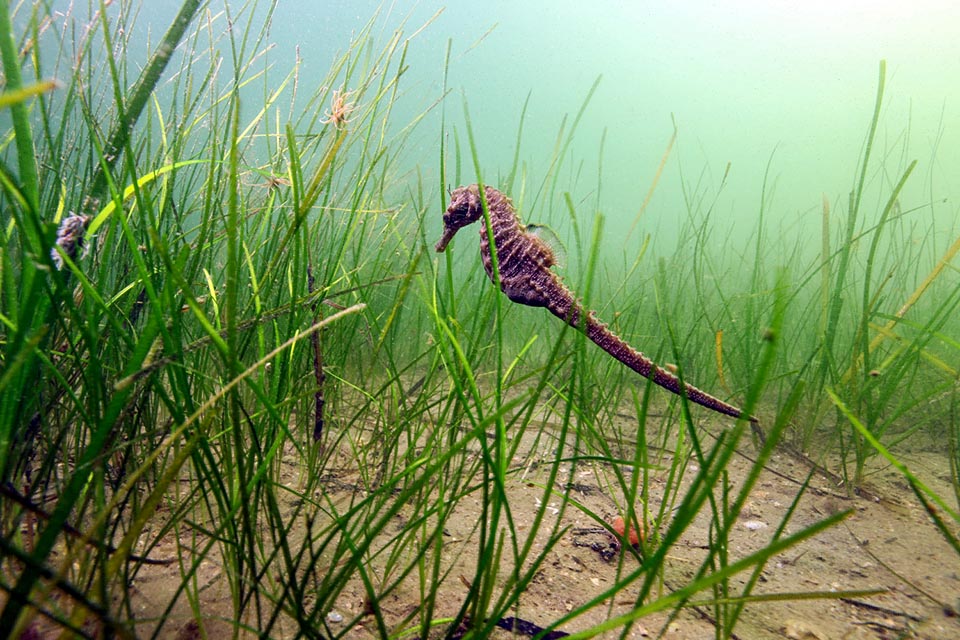 The submerged phanerogams prairies of Posidonia oceanica and of Zostera genus are the typical environment of Hippocampus guttulatus, whilst the other Mediterranean species, Hippocampus hippocampus, frequents mobile sediments. It swims ahead with dorsal fin whilst the pectorals stabilize direction and serve for vertical movements © Sandrine Ruitton

The mouth is very small, oblique and without teeth, done for tiny prey that are aspirated whole by its showy buccal tube, 3-4 times longer than its width.

The central part of the head has a concave pentagonal crown with two points in the front corners and three on the back. Then, often, there is a mane of skin flaps at times ramified with a mimetic function that also interests the neck. 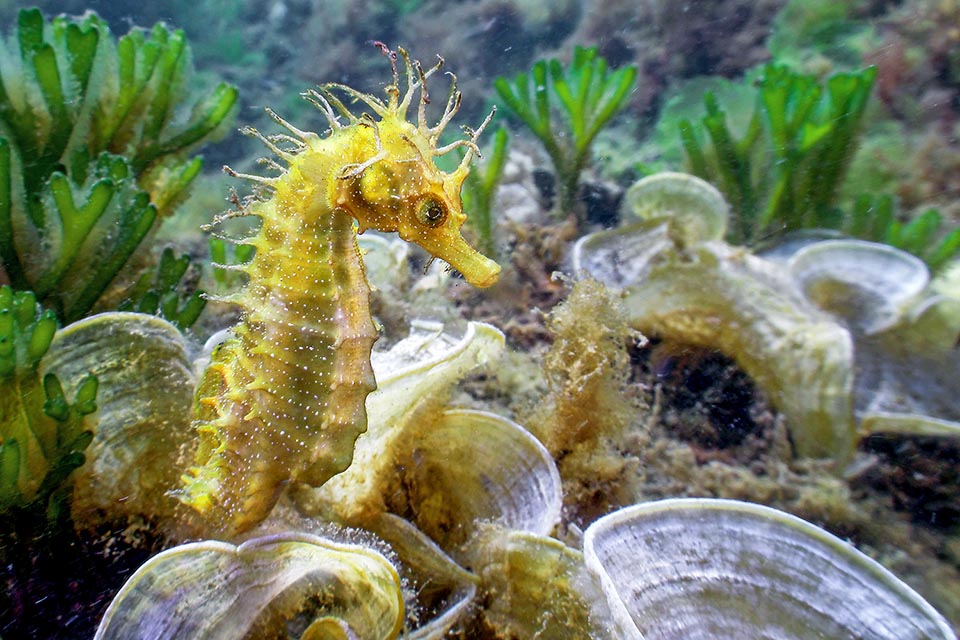 It is usually found from 1 to 20 m of depth, often glued with the prehensile tail to the plants busy in eating algae, small benthic invertebrates, larvae and eggs of fishes © Carlos Fernandez-Cid

Close to the eyes stand tiny spines, and others, bigger and blunt, are present on all the body in the crossing point between the skin bony rings with the lateral longitudinal crests.

The background colour is quite variable so much that has been advanced the hypothesis of possible nuptial liveries. It varies from brown to greenish black, but are not rare specimens of a bright live yellow, orange or red. The clear dotting spread over the body, white-light blue, silvery or yellow, is usually surrounded by a dark edge, and often tends to merge in horizontal undulated lines. 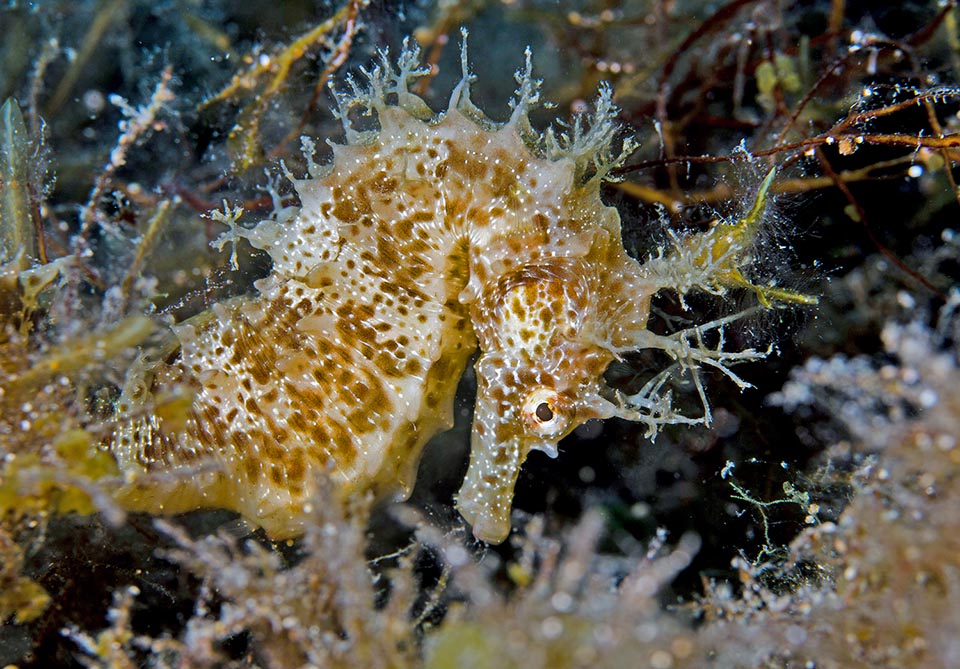 Seahorses have no stomach. Their rapid digestion is poorly efficient and so they go hunting nonstop. The big eyes can move independently with an ample vision of the surroundings to cover own backs and for evaluating well the distance for sucking in a dash the prey they approach thanks to their mimetic livery © Silke Baron

The protection of the eggs, as is the case for all seahorses, is entrusted to the males. As a matter of fact, these have just after the anus, a big ventral pouch, completely closed, with a front orifice commanded by a circular muscle. Inside it the tissue is soft and vascularized with several compartments intended for the eggs.

Hippocampus guttulatus is omnivorous. It eats algae and small benthic animals such as gastropods, annelids, isopods, antipodes and copepods, not to forget the microscopic shrimps prowling on the bottom, to which add larvae and eggs of the fishes carried by the currents. 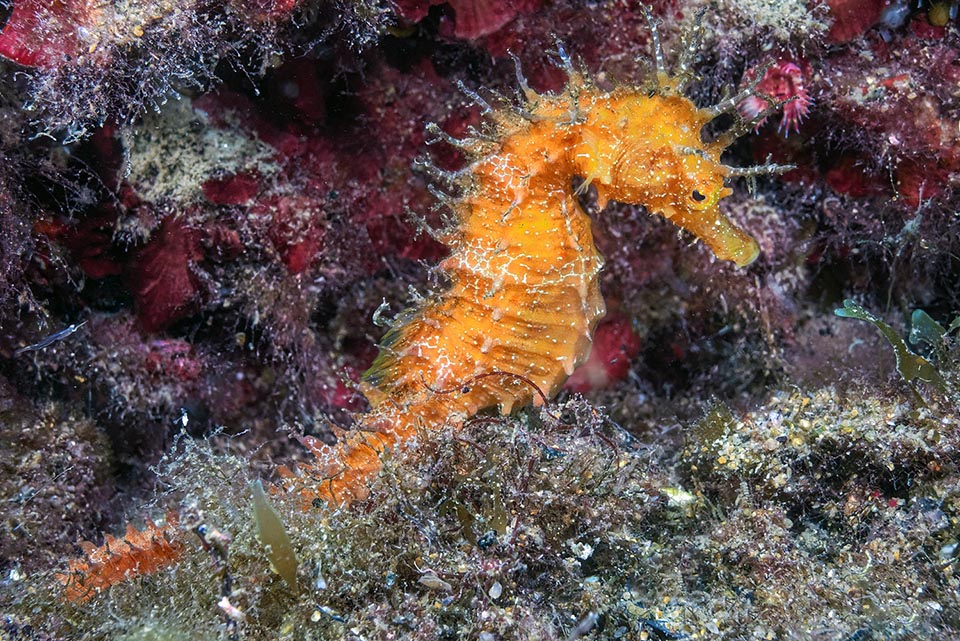 An unusual orange specimen. Has no scales, but the body, with blunt spines, is armoured under the skin by bony plates. It has 48-50 rings of which 10-11 concern the trunk © Carlos Fernandez-Cid

Its mimetic livery, in addition to protecting it from the predators, allows it to approach the prey without being seen, a full-time hunting because the seahorses do not have a stomach and their digestion is not very efficient.

The reproductive period goes from April to August, with a top between late May and late July. For the nuptial parade the colours do brighten up and the couples, holding by the tail, go up and down to the surface in a sort of a dance. This caudal hug does not take place in Hippocampus hippocampus, and this allows to avoid hybridizations. 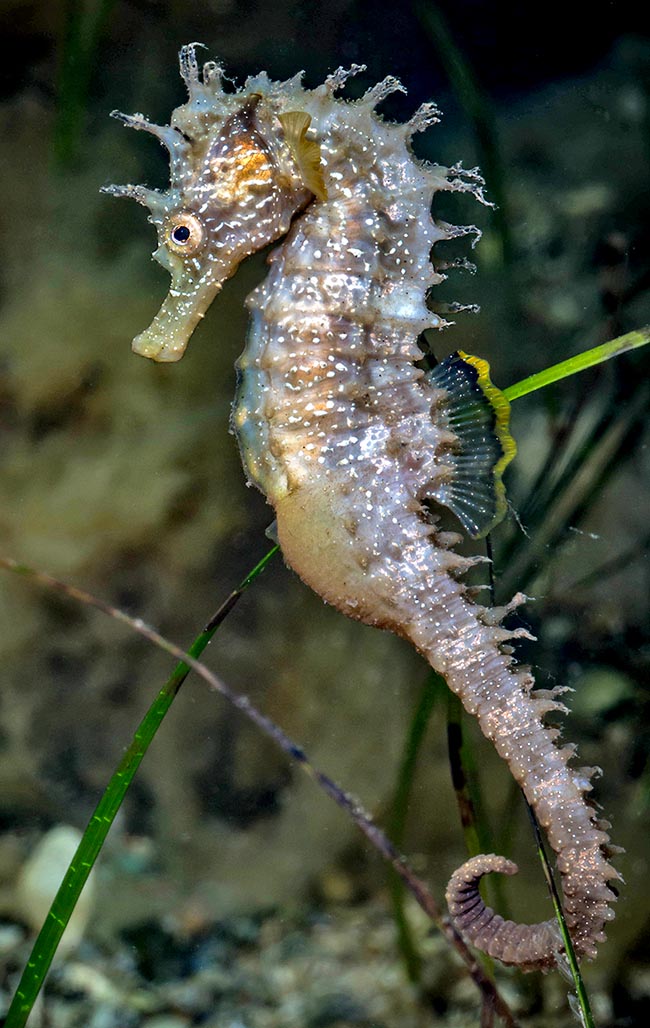 When the time has come, tha male emptied the incubation pouch full of water pressing it with the tail, and the female introduces the ova there by means of the genital papilla, a sort of 3 mm long ovipositor. They are fecundated and housed side by side in separate small cells where besides the feeding of the yolk, they get oxygen and food from the male’s capillaries.

The incubation lasts about 21 days and the male delivers by contracting, in several times, the about 16 mm long newborns with the snout already distinctly longer of Hippocampus hippocampus.

They are dispersed by the currents and lead a planktonic life for some weeks. This seems to allow this sedentary species to reduce the risk of consanguinity that impoverishes the genetic heritage, especially as the couples appear faithful for life.

Recent molecular studies have highlighted the existence of various local lineages, called, cryptic, that entail different aspects or simply different behaviours, and some have hypothesized a third species.

Hippocampus guttulatus reaches quickly the sexual maturity, 6-8 months after the birth, and the life expectancy is of 2-4 years.

The resilience is mediocre, with a minimum doubling time of the populations of 1,4-4,4 yard, but considering also the vast diffusion and the variety of its diet, the vulnerability index of this species is presently low, marking just 24 on a scale of 100.

However, in certain zones, the Long-snouted seahorse is declining.

Diseases have been hypothesized, there has often been talk of indiscriminate fishing and of pollution, but in some notoriously polluted lagoons the populations are abundant.

All seahorses appear however in the “Red List” of the endangered species under the label of “sata deficient”, which means that are missing data for saying if and what species of the genus Hippocampus are endangered.

What most affects the presence of Hippocampus guttulatus along the Mediterranean coasts is actually the reduction of the submerged prairies linked to human activities and in order to protect it is necessary to protect the environment. 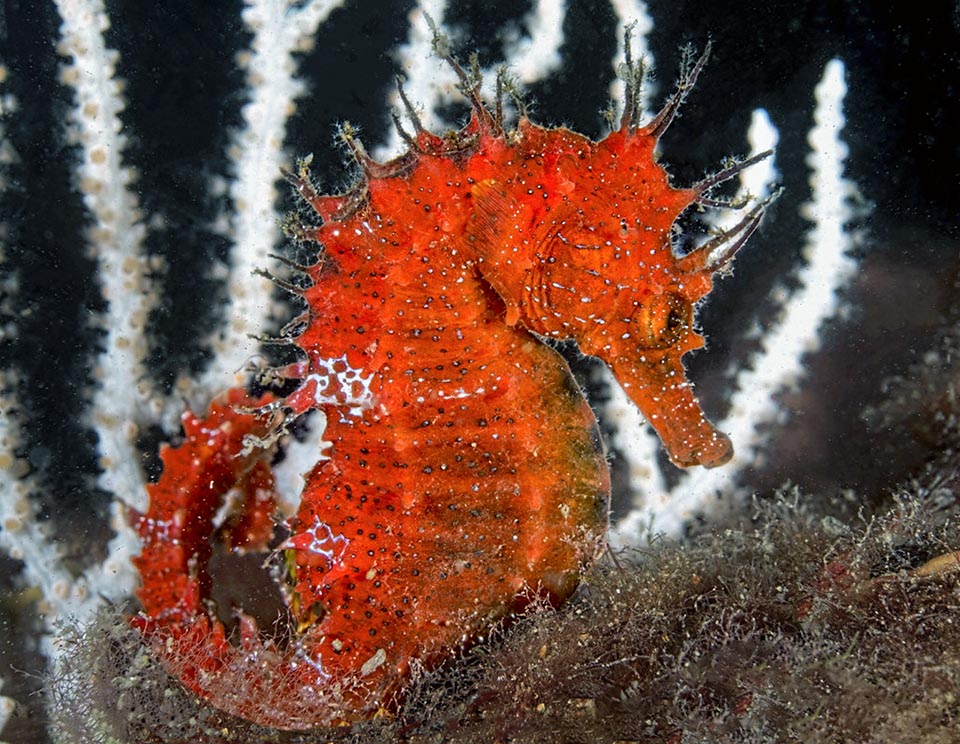 Colours are brilliant for the nuptial parade. The couples, holding by the tail, go up and down to the surface in a sort of a dance. Then the male empties the incubating pouch full of water pressing it with the tail and the female introduces there the ova, fecundated at once and lodged in small separate cells where, besides the feeding of the yolk, they get oxygen and food from the male’s capillaries. Incubation lasts about 21 days and the male delivers by contracting, in several times, about 16 mm long newborns © Carlos Fernandez-Cid

On initiative of the Foundation Prince Albert II of Monaco , in the Larvotto submarine Reserve in the Principality of Monaco that hosts a rich expanse of Posidonia oceanica have been recently introduced sompe seahorses born in aquarium in order to increase the biodiversity typical to this environment.

Hippocampus guttulatus was last modified: May 3rd, 2022 by Giuseppe Mazza