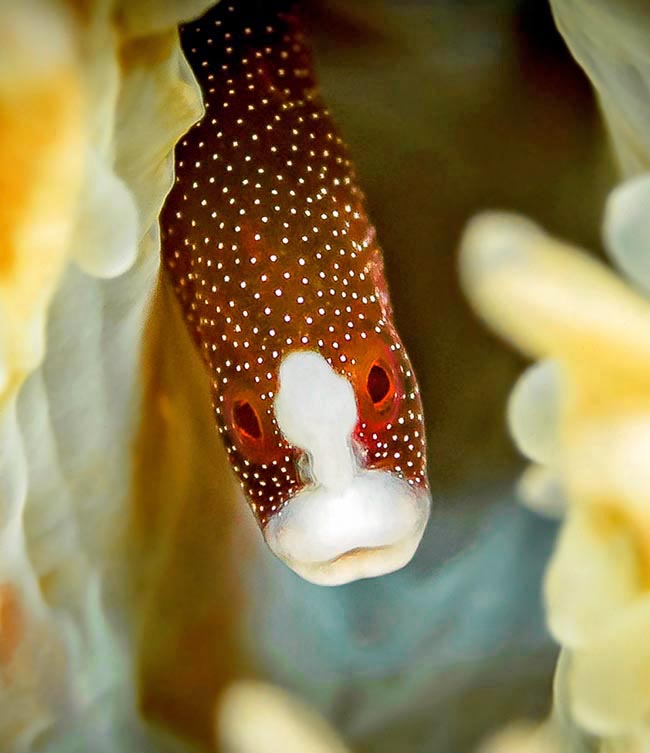 With its flattened small snout and the big eyes having the rather sad expression of a pug, the Bulbonaricus brauni is an unusual Syngnathiformes of the tropical Indopacific, described by Dawson & Allen only in 1978 © Sonja Ooms

Belonging to the class of the Actinopterygii, the ray-finned fishes, Bulbonaricus brauni (Dawson & Allen, 1978) is a rare and unusual member of the order of the Syngnathiformes.

It does not have the pectoral and the dorsal fins, but, especially, it is missing the typical cylindrical snout that is declined of the order in 5 families. Animals like the seahorses and the pipefishes grouped in Syngnathidae, species like the Harlequin ghost pipefish (Solenostomus paradoxus) of the Solenostomidae, the Razorfish (Aeoliscus strigatus) of the Centriscidae, the Chinese trumpetfish (Aulostomus chinensis) of the Aulostomidae or the thinner Cornetfishes belonging to the family of the Fistulariidae.

Tell the truth, Bulbonaricus brauni has this cylindrical snout and the fins, but at the larval stage only, because then it loses them during the metamorphosis to the demersal stage. In fact, as it lives always hidden among the polyps of the madreporic formations, it does not need them any more.

The taxonomists, considering the juvenile characteristics and the similarities with the pipefishes, have then placed it in the Syngnathidae, creating, also for other two similar species Bulbonaricus brucei and Bulbonaricus davaoensis, the genus Bulbonaricus that originates in Latin from “bulbus” = bulb, onion and “naricus”, relevant to nostrils, places in a showy protuberance of the snout.

The specific term brauni, of Braun in Latin, conversely recalls John Braun, a passionate Australian aquarist of Perth, friend and diving companion of Allen, who discovered the holotype and took it, still alive, to the Natural History Museum of Western Australia.

Bulbonaricus brauni has been found off Sumatra west coast, in Indonesia, in Western Australia, in the island of Palau and the Amami Islands, in southern Japan, that mark the northern limit of the species. 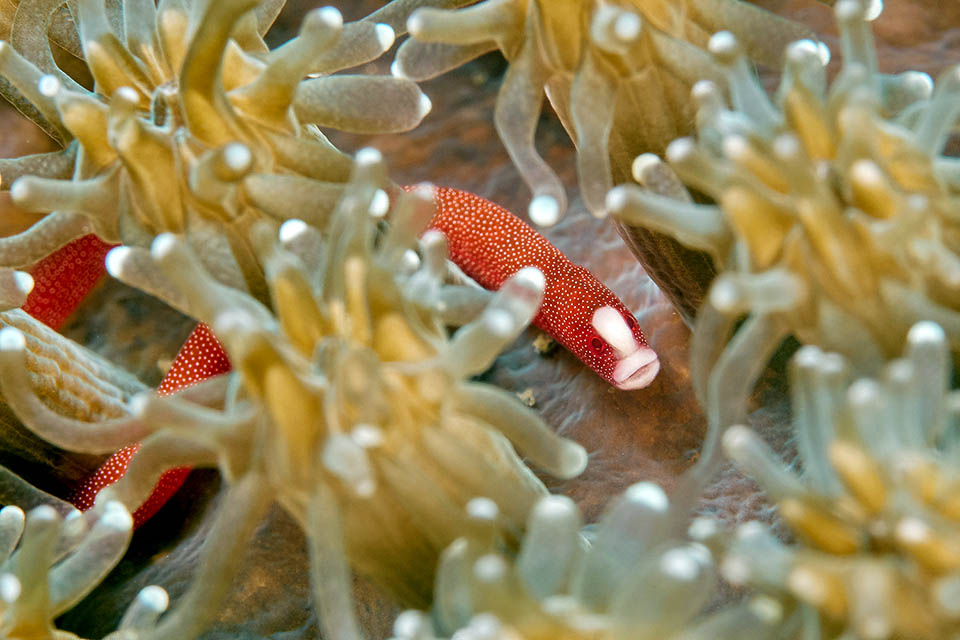 Just over 5 cm long, it is a sort of eel-shaped pipefish that has lost almost all the fins and the typical long snout of the seahorses, characters that it conserves only during the larval stage, before its demersal life. It doesn’t need them anymore because spends all its existence hidden among polyps of some plate madrepores © Christian Gloor

Bulbonaricus brauni lives usually between 1 and 10 m of depth, with sightings at 15 and 23 m, meandering among the polyps of the big plate madrepores belonging to the genus Galaxea, with frequent findings on Galaxea fascicularis and Galaxea musicalis, and other species belonging to the family Dendrophylliidae. 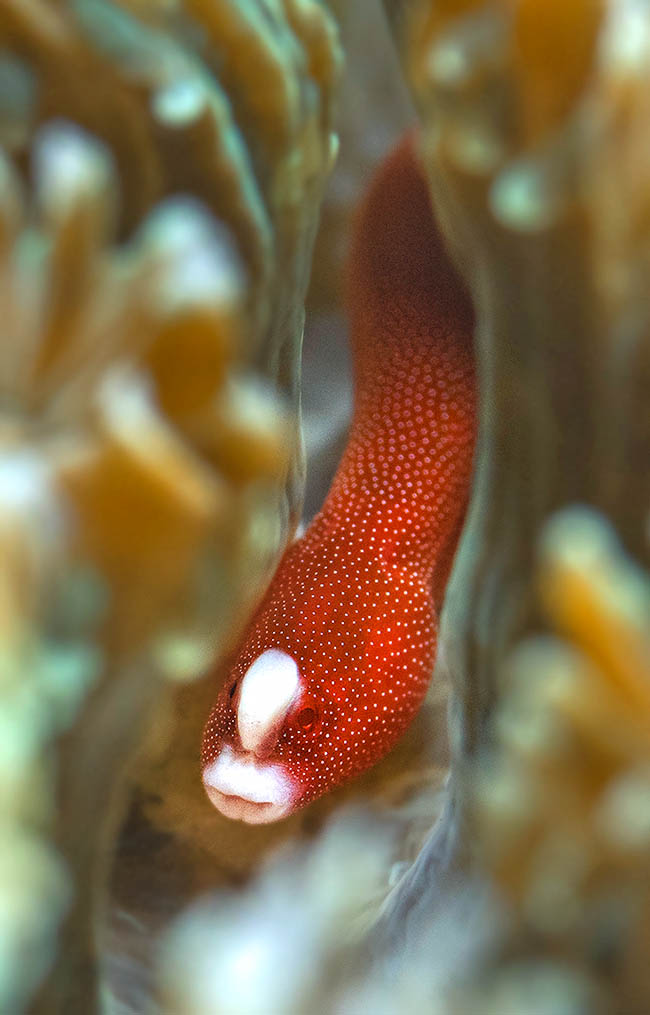 Has a typical protuberance between the eyes embedding the nostrils. Eggs are incubated by the males in a pouch under the tail, partially embedded by the epithelial tissue rich in capillaries that provide oxygen to the embryos © Rafi Amar

Bulbonaricus brauni has the look of a small eel and rarely exceeds the length of 5,5 cm.

Unlike the planktonic specimens that boast 42 rays on the dorsal fin and 10-11 rays on the pectoral ones, the only fin present in the adults is the tiny caudal with 10 rays.

The flattened snout, with those big eyes, evokes the little sad and pleasing expression of a pug.

The livery is reddish brown with white dotting that distinguishes it at first sight from the other two congeners that have a quite different colour and longitudinal pale stripes.

The characteristic protuberance between the eyes that embeds the nostrils, here is triangular, white like the lips.

Though little is known about the food habits of this species, visible only for a few moments while the polyps sway to the currents, it is possible that it nourishes of planktonic organisms, straying food particles and madreporic secretions.

After the eggs fecundation the eggs, of amber yellow or orange colour, are placed for the incubation until the hatching in a ventral pouch of the male located under the tail.

They are pear-shaped, partially embedded by the epithelial tissue of the pouch, rich in capillaries that provide oxygen to the embryos.

The resilience of the species is good, with a minimum doubling time of populations less than 15 months.

Even if the climate changes might threaten the madreporic formations hosting them, the vulnerability index in 2022 is very low, marking only 10 on a scale of 100.