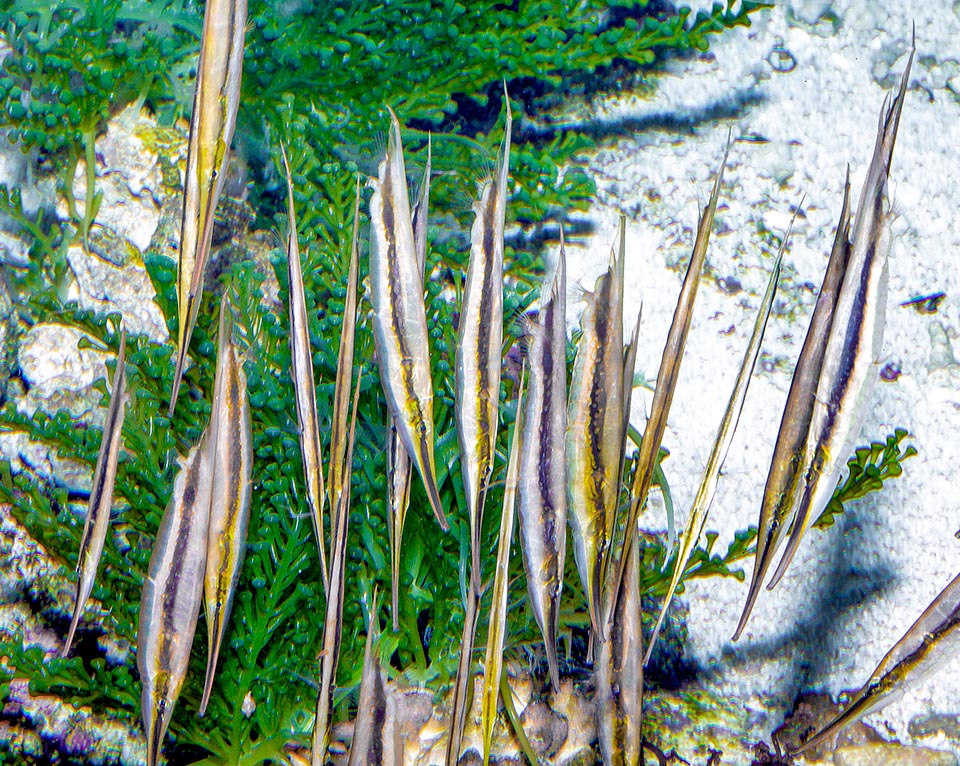 About 15 cm long, the Razorfish (Aeoliscus strigatus) is frequent in small schools that move in sync, upside down, in the tropical Indo-Pacific © Giuseppe Mazza

The Aeoliscus strigatus (Günther, 1861), belongs to the class of the Actinopterygii, the ray-finned fishes, to the order of the Syngnathiformes, that of the seahorses and of the pipefishes, that counts 5 families: Aulostomidae, Centriscidae, Fistulariidae, Solenostomidae and Syngnathidae, all species having the jaws merged in a sort of tube, apart from the adults of the genus Bulbonaricus who lose it during their development.

Popularly known as Razorfish, it is one of the 12 species of the Centriscidae, family counting only 5 genera, relatively similar, present in the tropical Indo-Pacific.

The name of the genus Aeoliscus refers, Latinized, to the Greek “Αἴολος” (Aiolos), the mythical Aeolus, god of the winds, seen that this fish lets itself to be easily dragged by the currents and swims without moving the body, as if it was pushed by the wind. 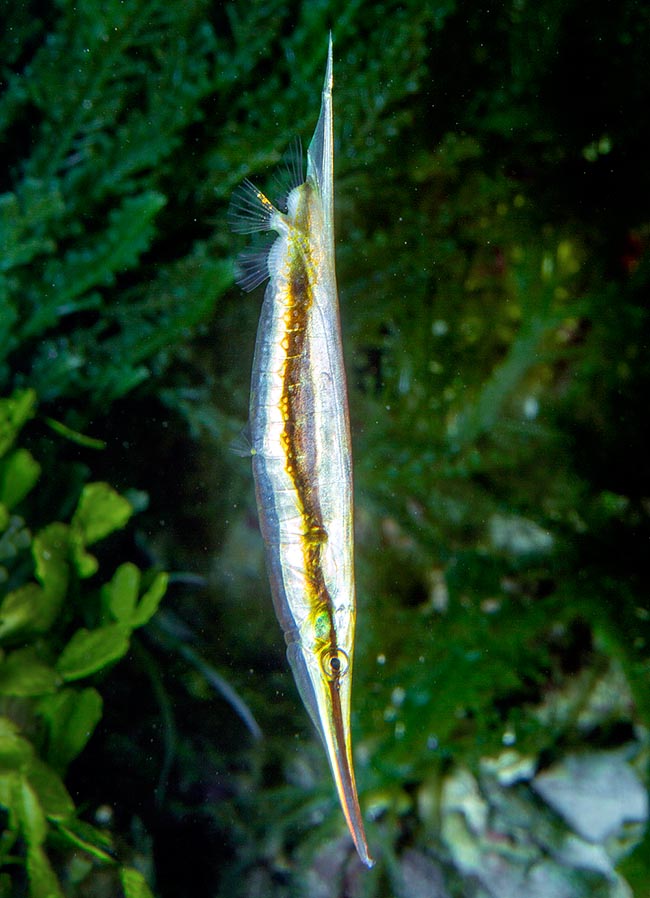 The specific name strigatus reminds us, always in Latin, that the body is crossed for all its length, by a characteristic dark band.

The Aeoliscus strigatus is present, indicatively, in the tropical waters of the Indian Ocean, from Tanzania and Mayotte up to the Seychelles and in western Pacific, from China and southern Japan, to Philippines, Vietnam, Cambodia, Malaysia, Indonesia, Papua New Guinea and Micronesia, including the Australian Great Barrier Reef up to the Vanuatu Islands and New Caledonia.

It mostly goes around in schools of some tens of individuals that move perfectly synchronized, at times even overlapped, with the head bent downwards, at 2-40 m of depth in waters having temperatures between 23-32 °C.

They live in the most sheltered zones of the coasts, calm bays with madreporic formations, estuaries and seagrass meadows where they disappear in the chiaroscuri of the moving green following their undulations. They often find shelter from the predators among the long rays of the sea urchins of the genus Diadema or the dense and prickly ramifications of the staghorn corals.

The Aeoliscus strigatus can reach at the most the 15 cm of length. The body is particularly flat: a razor grey silvery blade characterized by a long uninterrupted dark median stripe on both sides, that starts from the caudal peduncle to reach the mouth disguising the eye, a very diffused practice to confuse the ideas to the predators in the multi-coloured world of the corals.

The colour of the livery can vary depending on the habitat: green-yellowish with golden reflections between the algae, beige when the school moves on a sandy bottom and almost black when these animals take shelter among the long spines of th sea urchins.

The lateral line is absent and we can note thin transparent bony plates, showy expansions of the spinal column that protect almost completely the body.

The head is particularly tapered with the two jaws united to form a suction funnel. The dorsal side is almost rectilinear whilst the ventral one displays a roundish profile. 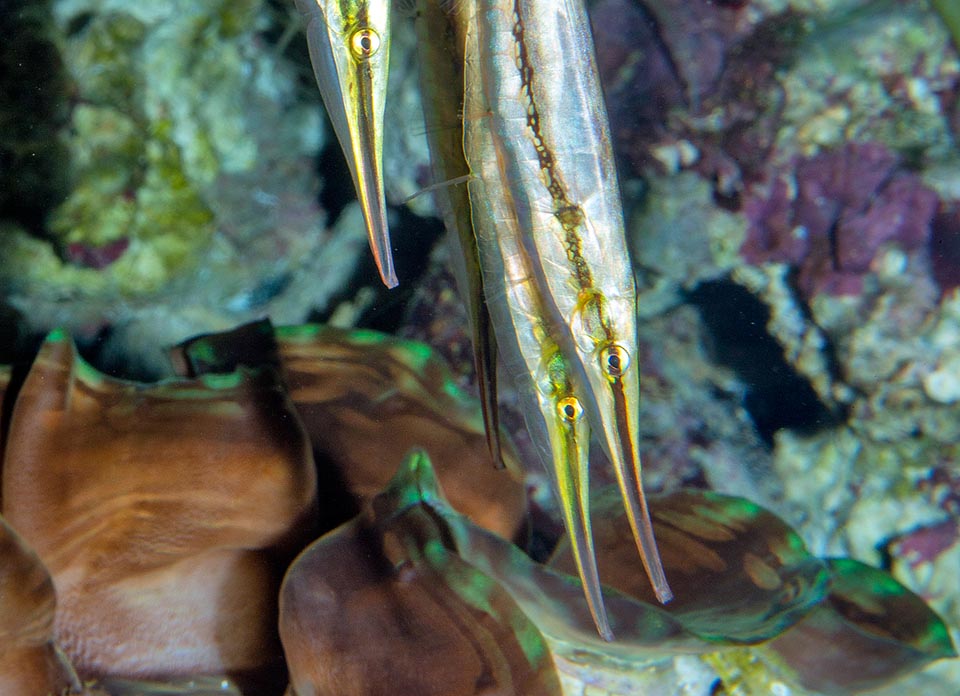 With the jaws merged in a sort of funnel it sucks zoo-plankton, mostly copepods, but also larvae of bony fishes, amphipods and other small organisms that finds on bottom © Giuseppe Mazza

The fins are small and translucent. The first ray of the dorsal continues elongating the body in an unusual and showy spine that can move in various directions and appears often sloping. Actually, the spiny rays of the dorsal are 3, plus 9-10 soft, but are small and little evident because during the evolutionary path of the species they have moved to the ventral side.

The Aeoliscus strigatus distinguishes from the analogous Aeoliscus punctulatus that has the longitudinal belt interrupted by a dark dotting and from other two “razorfishes”, the Centriscus scutatus and the Centriscus cristatus that do not have the spine of the dorsal fin mobile. 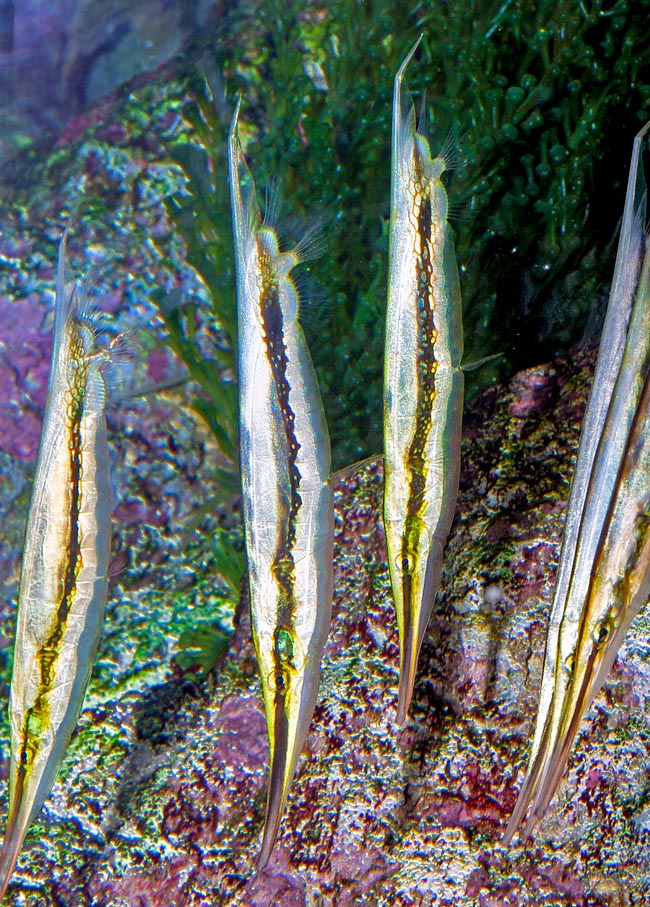 The livery adapts quickly to the environment. The young, after the pelagic phase, turn black to grow safely, camouflaged upside down, between the long jet black spines of the urchins belonging to the genus Diadema © Giuseppe Mazza

The Aeoliscus strigatus nourishes mainly of zoo-plankton, especially copepods it sights and then sucks up while swimming. But it explores carefully also the bottoms where it finds amphipods, small crustaceans and other small benthic organisms and feasts merrily with the companions when occasionally they meet a herd of bony fish larvae.

It does not seem that there is a sexual dimorphism, even if for some scholars the females should be slightly smaller, with longer and sharper ventral fins.

The reproduction appears to be linked to the lunar rhythm with spawning occurring during the full moon time.

The larvae are pelagic and abandon the open sea to return to the bottoms only when have reached the size of 2 cm. Like the adults, the colours adapt to the environment but is still absent the longitudinal dark band. The body is stocky, almost quadrangular, with the beak not yet elongated. Like the adults, the livery is beige when they are moving on a sandy bottom but then turns black as they usually live camouflaged and protected among the long black spines of the Banded diadem urchin (Diadema setosum).

And, not wrongly, evolutionarily talking, some say that their strange posture was born rightly from the position necessary to live with, camouflaged and without problems, among the arms of these great sea urchins.

Although if found for sale at about 50 USD each in unscrupolous catalogues for inexperienced aquarists, though being a peaceful species and of small size, the Aeoliscus strigatus can be hosted in the public aquaria: in fact, it needs well set big pools rich of algae and corals with relevant micro-fauna, and if it is not possible to furnish them fresh plankton, it is to be nourished several times a day with live larvae of Artemia salina and then, if accustomed, with frozen krill.

The resilience of the species is excellent, due to the capacity, in case of catastrophic events, to quickly double the populations in less than 15 months, and the Razorfish, absolutely not in danger, has therefore a very low index of vulnerability that marks now (2020) only 24 on a scale of 100.