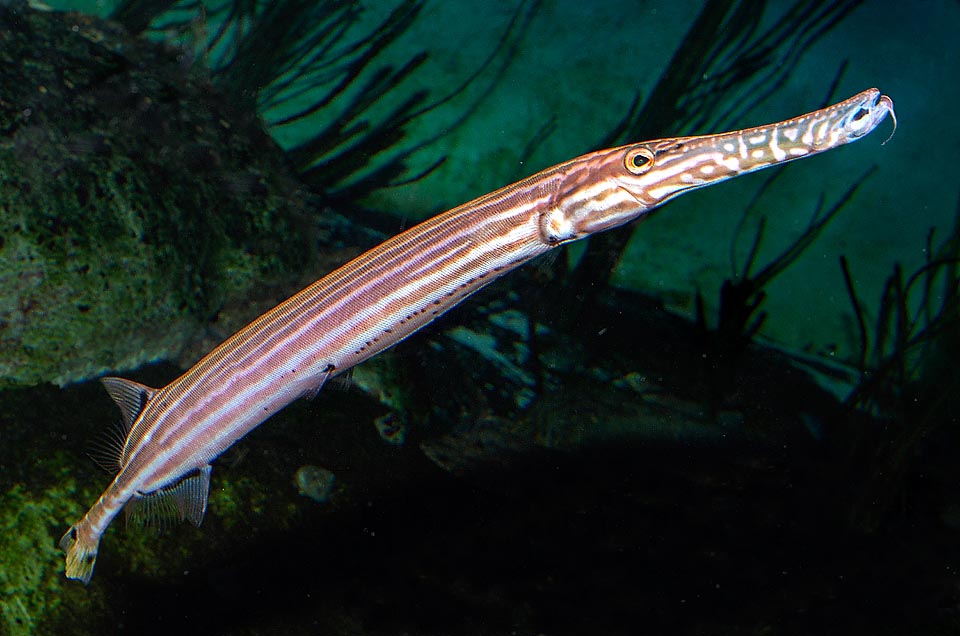 Apart the size, seen that it reaches 80 cm, Aulostomos chinensis is related to the pipefish and the seahorses belonging to the same order of the Syngnathiformes. Present in almost all tropical Indo-Pacific waters, is able to change livery faster than a chameleon. Pale parallel lines on reddish background are a frequently seen © Giuseppe Mazza

The  Aulostomus chinensis (Linnaeus, 1766),  known as Chinese trumpetfish or Pacific trumpetfish, belongs to the class of the Actinopterygii, the ray-finned fishes, and to the order of the  Syngnathiformes,  the same to wich belong the pipefishes and the seahorses.

The genus Aulostomus, from the Greek “αὐλός” (aulos) = flute and “στόμα” (stoma) = mouth, due to its shape evoking a musical instrument, counts only three species united in the family of the Aulostomidae: the Aulostomus maculatus of the Caribbean, the Aulostomus strigosus present in eastern Atlantic, from the Cabo Verde islands to the tropical African coasts, and our Aulostomus chinensis .

The specific name chinensis, in Latin “of China”, refers to the waters where it lives, that, actually, are much more vaster. 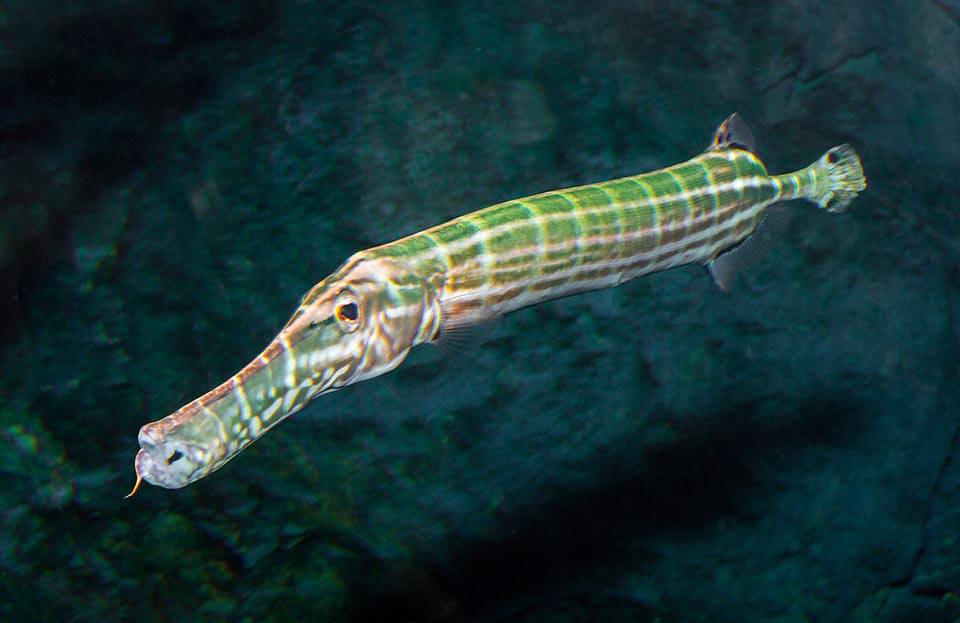 But few moments later, for emotion or mimicry causes, its fantastic chromatophores give him a checkered livery on green background © Giuseppe Mazza

The Aulostomus chinensis is spread in almost all tropical Indo-Pacific. Indicatively, we find it along the African coast from Somalia to South Africa, including Madagascar and adjacent islands such as Mayotte, Réunion and Mauritius. Then in the Seychelles, Maldives, India, Sri Lanka, Thailand, Indonesia, Philippines, Vietnam, Taiwan, China and in the Japanese southern islands.

In Oceania, besides Papua New Guinea, Micronesia and Australia, it is present in New Caledonia and Vanuatu reaching southwards New Zeland. Eastwards, we find it in the Fiji, Samoa, French Polynesia, Hawaii, and further away, up to the Galapagos, Ecuador, Colombia and South America up to Chile. 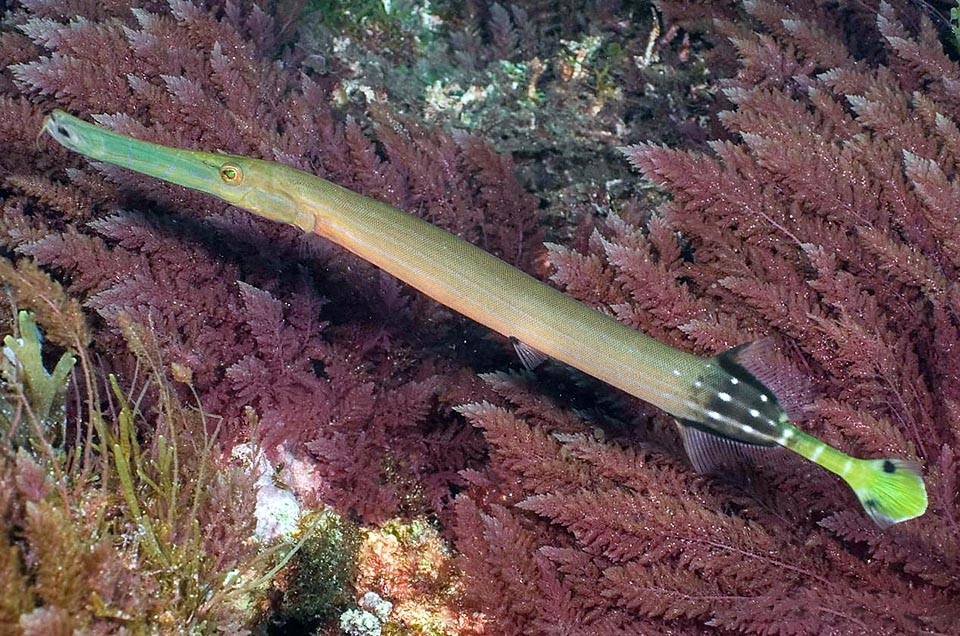 Here the longitudinal pale lines are almost gone and a white dotted dark zone precedes the caudal peduncle, yellowish as the near fin that displays two black dots on the sides. A shot of wavy light to attract attention of the predators and, as it often happens, making them to confuse the head with the tail © Reef Life Survey – Andrew Green

It lives in clear and calm waters, usually between the 3 and 120 m of depth: rocky or madreporic zones where it is a master in mimicry. It is often found inclined or upside down, almost invisible, among the ramifications of the gorgonians or of the black corals.

The body, long and laterally compressed, can reach the 80 cm of length. Good part of it belongs to the long tubular snout, that ends in a showy black spot on the upper jaw and a barbel at the extremity of the lower one. The mouth, protractile, can swallow even big preys. 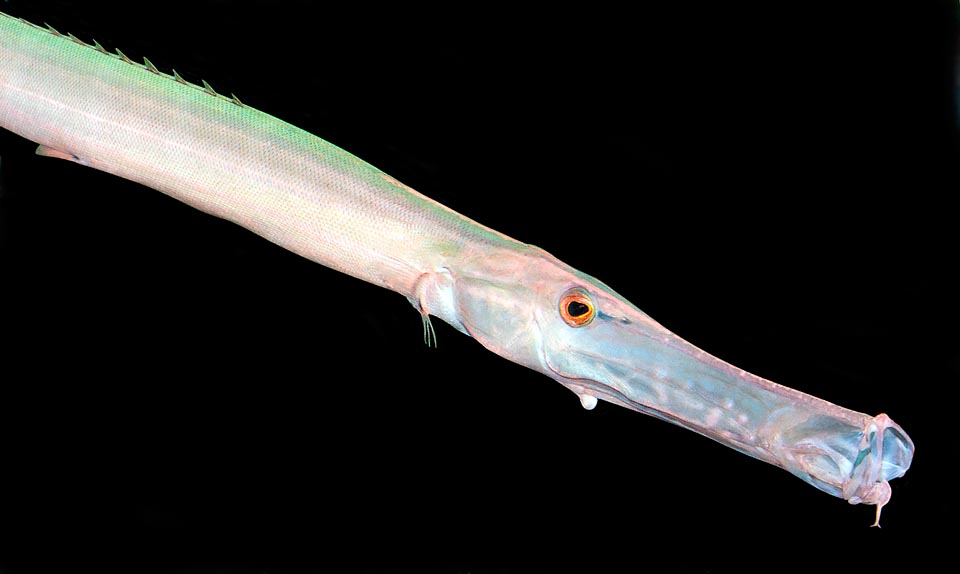 Here attacking. We note the protractile mouth, able to gulp even big preys, and the first dorsal fin with its tiny erect spines © Giuseppe Mazza

There are two dorsal fins. The first has 8-12 spines starting, well separated from each other, very often not visible because the fish raises them only when attacks or if in case of danger. The second is triangular with 24-27 unarmed rays, placed well back close to the caudal peduncle.

The pectoral fins count 17 rays, unarmed like those of the tiny pelvic ones that have 6 of them with a small black dot after the base. The caudal fin is lanceolate.

The livery is extremely variable, at any moment, thanks to the incredible work of its chromatophores, the cells of the skin containing the expandable or contractable granules of the pygments, that may perform instant changes of pattern and colour. 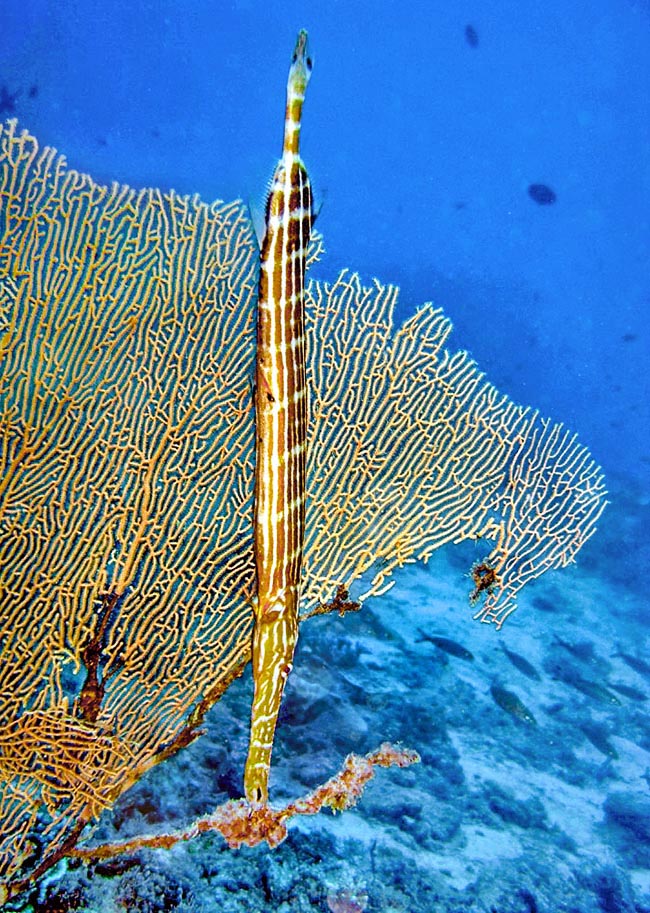 Vertically camouflaged in the coral branches, often waits for the meal to pass close © Yvon Gildas

It has been noted, however, that some fishes are uniformly yellow, which means that they do not have changing chromatophores, and so there is who has hypothesized that this might be only a passing phase of their life.

The most current livery foresees clear parallel longitudinal lines on a grey, greenish or reddish background.

Then clear line may disappear instantly or cross with analogous vertical lines to form small squares having bright corners, in the points where the traits do overlap.

The final part of the body is black dotted with white, whilst the caudal peduncle, with vertical white lines, is yellow as well as the caudal fin that usually has two black dots on the sides.

Usually, because in this species, where variability is at home, can be found also specimens with one dot only.

The Aulostomus chinensis goes hunting solitary during the day mainly nourishing of fishes, but also of shrimps and other small benthic animals.

It suddenly sucks them with the mouth as wide as the body and an expandable belly that does not hesitate to welcome big preys.

It follows the fishes that are stirring the seabed, like the mullets stealing their food from their mouths, and swims often hidden, stuck to the trutles or to fishes of great size, such as groupers, to pass unobserved and to pounce treacherously on small preys, distracted by the arrival of a possible predator.

But in most of cases, if not hungry, it plays lazily the mimicry card: it keeps motionless, vertically, among the branches of the corals, thus recreating with its chromatophores the patterns and the colour of the host, ready to jump on the passing unfortunate.

The yellow shape, too evident on a gorgonian or on a black coral due to the absence of changing chromatophores, does not have this choice and then, astutely, mixes, as if nothing had happened, to schools of grazing yellow fishes and thus it often goes unnoticed.

The fecundated eggs are take away by the currents and go around, pelagic, like the larvae till when the small fishes, growing, are able to swim towards the seabeds for hunting more nourishing preys. 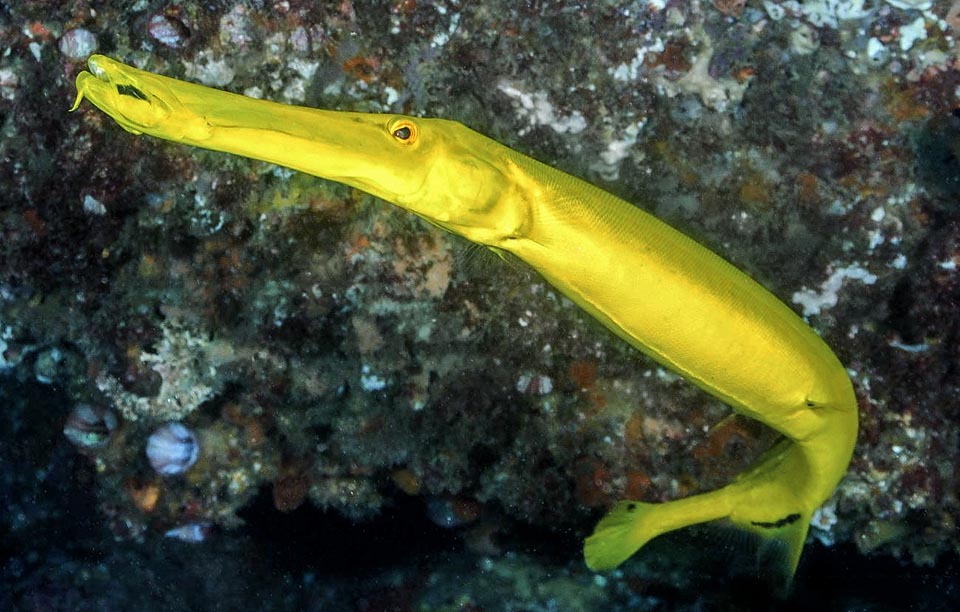 To hunt unobserved, the yellow form, who can’t change colour hanging upside down among the corals, mixes often with schools of yellow herbivores to get close to prey. Here we note well, beyond the barbel, the dark dot on the upper jaw and the unusual absence of the second black dot on the caudal fin © Reef Life Survey – Ian Shaw

Since it is a fish with a very vast range, fished only by mistake or upon request of some public aquarium, the Aulostomus chinensis does not seem to be an endangered species.

The resilience is unknown, but considering also the great number of possible preys, it has been concluded that the vulnerability index of this species is nowadays (2020) moderately low, marking 34 on a scale of 100.

Aulostomus chinensis was last modified: May 18th, 2022 by Peppino