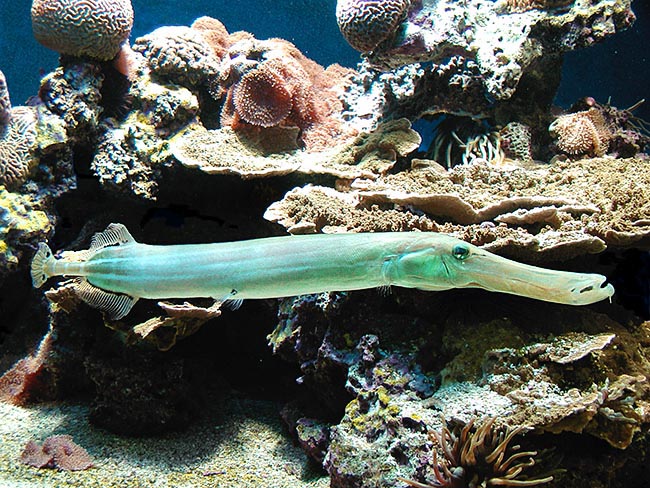 The unusual Trumpetfish of the Caribbean (Aulostomus maculatus Valenciennes, 1841) belongs to the class of the Actinopterygii, the ray-finned fishes, to the order Syngnathiformes, the order of the needlefish and of the seahorses, and to the family of the Aulostomidae, which counts only one genus and three species present in the tropical waters of the Atlantic Ocean and of the Indo-Pacific.

The name of the genus comes from the Greek “aulos” = flute and “stoma” = mouth, because its shape recalls the well known musical instrument.

The name of the species “maculates” = spotted in Latin, refers to the usually black small spots, but even white, present at times in various parts of its body.

The trumpetfish of the Caribbean, as its name suggests, is at home in the Caribbean Gulf, but not only there. Indicatively, we find it in the southern USA, in Mexico, Belize, Guatemala, Honduras, Nicaragua, Costa Rica, Panama, Colombia, Venezuela, Guyana, Surinam, French Guyana and Brazil, not to forget a multitude of islands, such as the Bahamas, Cuba, Hispaniola, Jamaica, Puerto Rico, Anguilla, St. Kitts and Nevis, Antigua and Barbuda, Guadeloupe, Dominica, Martinique, St. Lucia, St. Vincent, Barbados, Grenada and Trinidad. 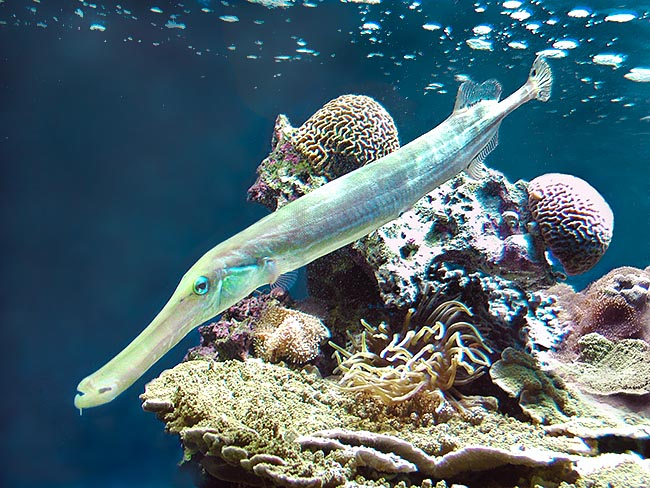 It seems that it has been found also at the Canary and Cape Verde islands, on the other side of the Atlantic.

Master of camouflage, it is often found bent or upside down, almost invisible among the madrepores, the gorgonians and the black corals, in relatively shallow waters, up to 25 m of depth.

The body, elongated and thin, may exceed the 90 cm. A good part belongs to the snout, shaped like a trumpet, due to the long merged jaws, with protractile mouth carrying below a barbel.

The modest ventral fins are near the middle of the body and the caudal is more or less rounded. The livery is extremely variable. Usually, it is brown-reddish with white lines and black small spots, but it may also have some dark or white horizontal stripes, continuous or broken, and vertical bands more or less marked, almost invisible at times, on a silvery, yellow or blue-greenish background, not to talk about the work done by the chromatophores with unbelievable instantaneous adaptations. 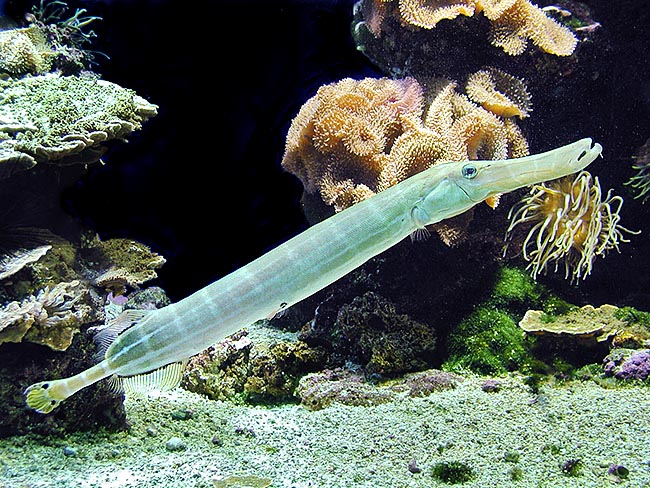 The livery is extremely variable. Usually, it is brown-reddish with white lines and black small spots © G. Mazza

It mainly nourishes of fishes, but also of shrimps and small benthic animals.

It sucks them on the bottom or among the corals with its mouth wide as the body, and if the prey is slightly bigger, no problem, because it can even dilate and there is always room in its elastic abdomen.

In conclusion, it is an aspirator of the sea, decidedly smart and ruthless.

It follows the fishes that rummage the bottom, like the mullets, for stealing them the food from their mouth, and often swims hiding, almost stuck, on the side of the big herbivorous fishes, in order not to be sighted and to swoop as a lightning on the preys.

Or it lazily keeps on the vertical among the corals, recreating their drawings and colour, ready to dive like a bolt on the passing unfortunates.

The fertilized eggs travel freely with the currents, as do the larvae, until they get to the bottom once fully mature.

The species, common in some zones, shows however, in the whole, certain vulnerability, with a relatively high index of 50 on a scale of 100. 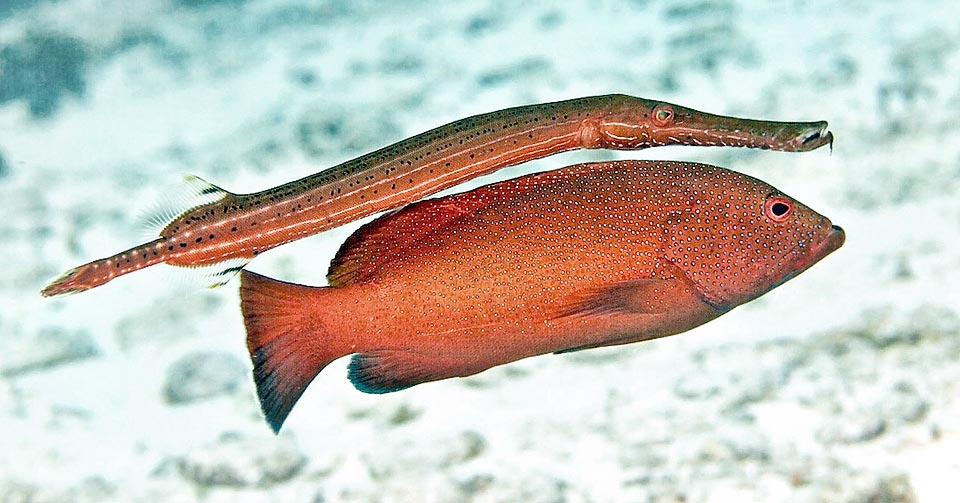 It’s a smart opportunist. At times follows the fishes stirring the bottom, like the mullets, to steal them the food from the mouth. Or swims hidden by large species, like the grouper, imitating perfectly the livery to be unnoticed and to swoop treacherously on the small fishes worried and distracted by the predator approach © Allison & Carlos Estape