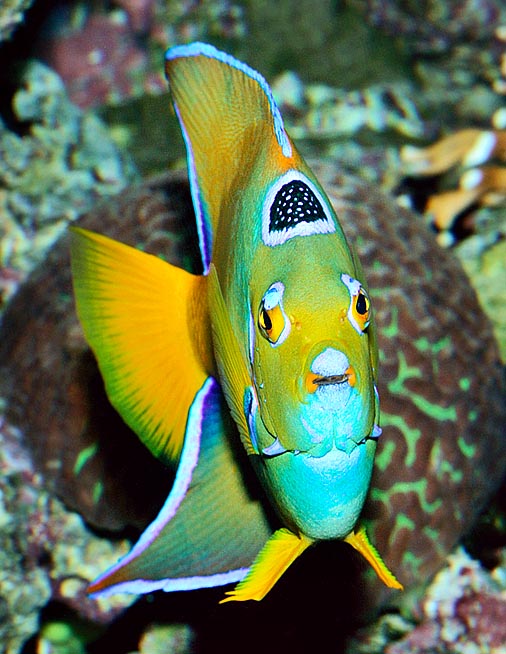 A fish with crown and eyelashes? Here is the Holacanthus ciliaris © Giuseppe Mazza

The Yellow angelfish (Holacanthus ciliaris  Linnaeus, 1758), known also as Queen angelfish due to its crown-shaped drawing it has on the head, belongs to the class of Actinopterygii, the ray-finned fishes, to the order of Perciformes and to the family of Pomacanthidae, which counts 9 genera and 74 species.

The etymology of the genus Holacanthus comes from the Greek “olos” = entire, whole and “akantha” = spine to underline the great spine on the operculum and the presence of interopercular spines.

The name of the species ciliaris comes from the Latin “cilium” = eyelash. It is, in fact, a fish with the eyelashes, as it can be well noted from the frontal photo here beside.

It is present in the tropical waters of the western Atlantic Ocean.

Just to give an idea of its distribution, we find it from Florida and the Gulf of Mexico up to the Caribbean Sea and Brazil.

It lives among the madrepores and the corals in shallow waters, but also at 70 m of depth on the outer side of the reefs. It knows well the hiding places of its small territory and disappears moving with grace, immediately, as soon as the predators show up.

The yellow and the blue colours are predominant in the livery, which is quite variable. The tail the pectoral fins and the ventral ones are always yellow and more or less yellow is the operculum zone. Over the eye, on the back, stands a characteristic blue spot white dotted and emphasized, like a crown by an electric blue border, like that of the prolongations of the dorsal, separated, towards the apex, by a red zone. Typical is also the blue spot at the base of the pectoral fins. 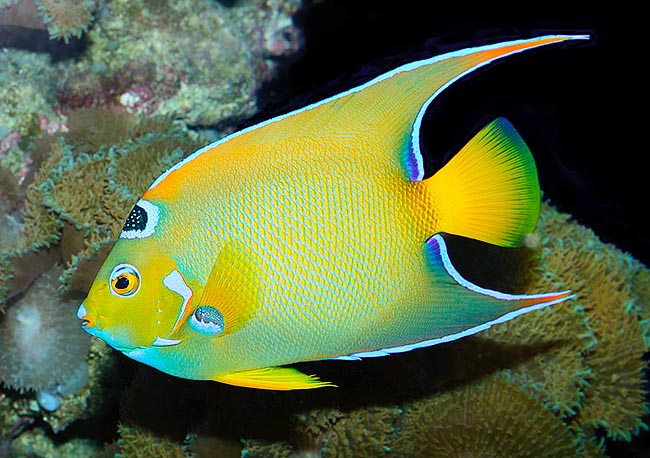 The body is greenish blue with the border of the scales yellow and when this hue becomes dominant, the vulgar epithet of yellow angelfish seems to be justified. In the adults having a certain age, on the contrary, the dark hues are dominant.

Over the eye, we note two small blue bars similar to an eyelash, as states the name of the species.

The livery of the juveniles is completely different, so much that in the past they talked about other species. The blue crown on the head is absent, the eye is crossed by a wide vertical, dark blue band bordered by electric blue and 2-3 blue electric vertical bands cross also the body, bluish in its whole, excepting the fore ventral zone, the lips and the tail, which are yellow.

The yellow angelfish lives solitary nou- rishing of phytoplankton, zooplankton and various benthic invertebrates, such as hydroids, bryozoa, ascidians and sponges, without forgetting some seaweeds and phanerogams of the submerged grasslands. Usually, the males control a small territory where they allow only the females, absolutely similar but smaller, to enter.

The reproduction, by pairs, may take place all over the year and the eggs are pelagic. Demanded by the aquaria market, it is also sporadically consumed by the fishermen of the Caribbean, careless of the risk of ciguatera, a serious alimentary intoxication related to the presence of poisonous organisms in its diet. In nature, the populations may double in 1,4-4,4 years and the species has presently a moderate vulnerability index: 44 on a scale of 100.