The Blue angelfish (Holacanthus bermudensis Goode, 1876), belongs to the class of Osteichthyes, the bony fishes, to the Actinopterygii, the ray-finned fishes, to the order of Perciformes and to the colorful family of Pomacanthidae, the angelfishes, which count 9 genera and 74 species.

The etymology of the genus Holacanthus comes from the Greek “olos” = entire, whole and “akantha” = spine, to evidence the great spine on the operculum and the presence of interopercular spines. In short, it is a totally spiny fish.

The specific name bermudensis, comes from the Latin and means “from Bermuda”, in reference to the presence of this species along the coast of this islands and to the fact that one of the syntypes (individuals used by the author to describe the species) was collected by Goode in this islands.

It is present in the tropical waters of western Atlantic. We find it at the Bermudas, in southern USA, in Mexico, Belize, Honduras, Nicaragua and Cuba. In fact, it lives mainly between the Gulf of Mexico and the Caribbean Sea.

It lives in the lagoons, amongst the corals, but also in the outer border of the reefs up to 90 m of depth. 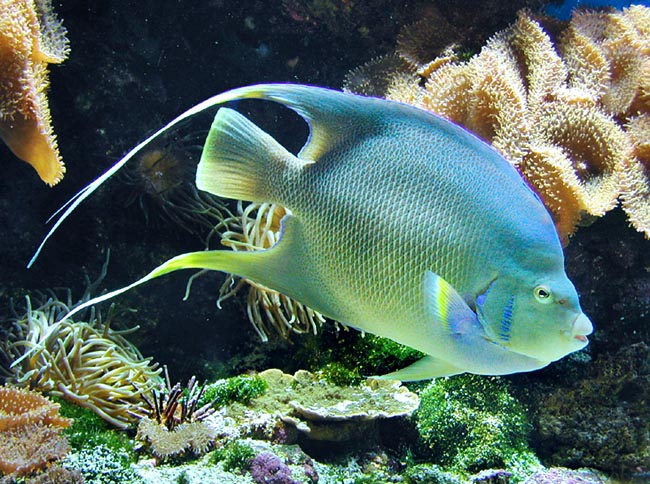 With Holacanthus ciliaris, Holacanthus bermudensis, with 45 cm and 3 kg of weight, is the greatest angelfish © Giuseppe Mazza

Like the Holacanthus ciliaris, to which anatomically it resembles a lot, it reaches the length of 45 cm and the weight of 3 kg.

Also the juveniles’ livery, completely different from the adults’ one, is very similar to that of the Holacanthus ciliaris : both species, in fact, present some clear lines which here are slightly more vertical. Seen the huge number of spawned eggs and the home range largely overlapped, there is also who speaks of hybridization between the two species.

The Holacanthus bermudensis nourishes of various benthic animals, such as hydroids, bryozoa, jellyfishes, ascidians and especially of sponges, but also of seaweeds and aquatic plants. It is a rather solitary territorial species, if we exclude the mating season. It can reproduce all the year round. The eggs, pelagic and floating, are fecundated in open seas. The females may release even 75.000 of them per day and hatch immediately, nourishing, for a couple of days, of the yolk sac. Then, they greedily nourish of plankton and grow up visibly. The juveniles often behave, like the Labroides, as cleaning fishes, taking off the parasites from various species, turtles included.

It can adapt to the aquarium life, but it is to be kept in appropriate pools without conspecifics because it would immediately enter in conflict with them. If well nourished, it can live even twenty years. Seen the size, it is at times consumed by the fishermen of the Caribbean, ignoring the risk of ciguatera, a serious alimentary intoxication related to the presence of poisonous organisms in its diet. In nature, the population may double in 1,4-4,4 years and the species has presently a vulnerability index of 44 on a scale of 100.