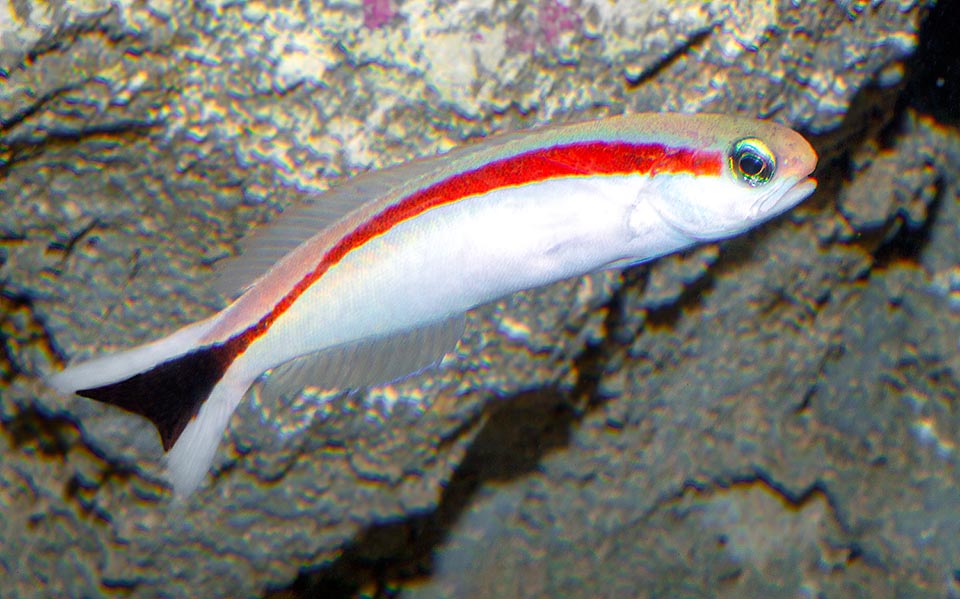 Long at most 12 cm and described only recently, Hoplolatilus marcosi covers a relatively modest area in the tropical Indo-Pacific at 18-80 m of deep © Giuseppe Mazza

Hoplolatilus marcosi Burgess, 1978, is a species described recently belonging to the class of the  Actinopterygii, the ray-finned fishes, to the order of the  Perciformes  and to the small family of the  Malacanthidae, counting, in 2020, only 5 genera and 45 species, in possible increase after the outgoing researches. For example, recently, it seems that a new species of Hoplolatilus has been found in the Red Sea.

Small-sized fishes that exceed the meter of length in the Lopholatilus chamaeleonticeps, the biggest species in the family, living in western Atlantic along the American coasts and that can go down up to 540 m. 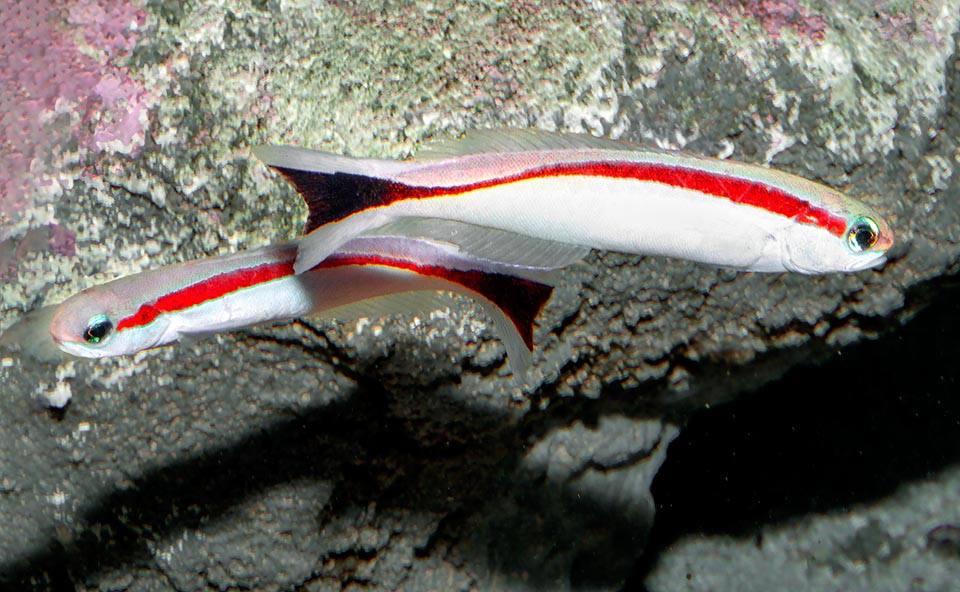 The genus Hoplolatilus comes from the old Greek “ὅπλον” (òplon) = shield, the circular one, typical to the infantry, and from the Latin “latus” = wide, referring to the fact that they build dens on the bottom, where to spend the night and where to shelter in case of danger, amassing in a circle around the entry a huge quantity of remains of shells and madreporic fragments. Even modest constructions, but that three deep water species may reach even the diameter of 3 m. They are well visible from far away and that at first sight might appear nonsense because they could reveal the hiding place to the predators. As they are fishes frequent in the Philippines waters, the specific term, marcosi, in Latin of Marcos, is a possible tribute to the Filipino President Ferdinando Marcos.

Hoplolatilus marcosi covers a relatively modest area. Besides the Philippines, it is present south to Japan, in Okinawa Island, the northern limit of the species in Indonesia, East Timor, Palau, Papua New Guinea, Solomon Islands and Tonga, that marks, after present researches, the eastern limit of the species. 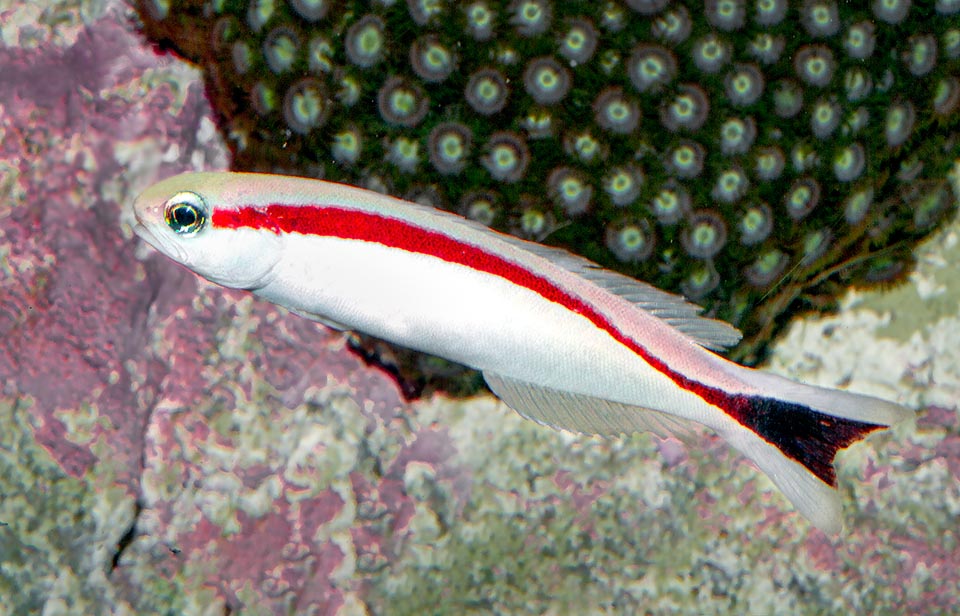 It is a tropical waters fish, living in couples at times united in small colonies, at 18-80 m of depth. When not busy to enrich the house with fragments, at times stolen to neighbors, it spends the day swimming, almost motionless, over the den, where pass the currents rich of plankton, ready to take shelter at home in case of the least sign of danger. 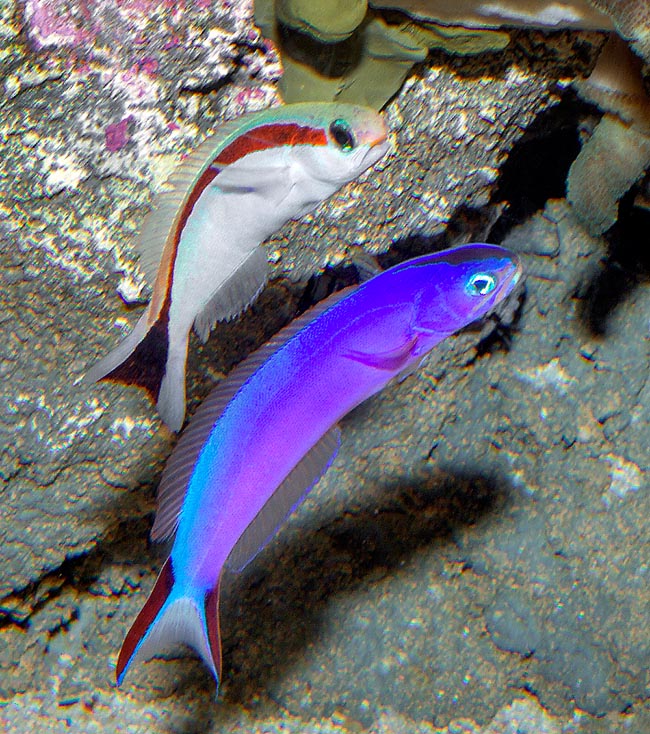 Hoplolatilus marcosi and Hoplolatilus purpureus found together in the Philippines close to the common den. When one of these fishes loses the partner and does not find another, may share temporarily the house with an alone member of the analogous neighboring species. Neighbor relations are excellent but hybrids have never been found © Giuseppe Mazza

Hoplolatilus marcosi nourishes of small planktonic crustaceans, especially copepods, pelagic tunicates and of the eggs that many fishes entrust to the currents.

Obviously, when it moves the madreporic fragments for its constructions, it does not ignore, when it’s the case, possible benthic small preys.

The fragments are transported with the mouth but for cleaning and levelling the sand at the entry of the hole it uses the body modeling it with surprising rotary movements.

We know that it is a strictly monogamous species, but the reproductive modalities are still to be studied.

The members of the genus Hoplolatilus are peaceful and the territory of a couple may overlap with that of another couple of the same species or of a similar one.

There are no rivalries, food abounds and they nourish quietly crossing in the same column of water over the dens.

Neighborhood relations are so good that if one fish loses its partner and is unable to find another, it can share temporarily the den with an individual of the neighboring species.

This is the case, for instance, in the Filipino waters of Hoplolatilus marcosi and Hoplolatilus purpureus, but hybrids have never been found.

Because of their beauty and the elegance in their movements, they are very demanded fishes by the aquarists, even if the specimens, sold at high price, do not last long among the domestic walls. Besides the difficulties for feeding them, in fact, they have often the liver compromised by the catching with poisons or the swim bladder damaged by too fast ascents, done without decompression. Moreover, they have a marked tendency to jump out from the pools without cover if they are scared. So, it is better to leave them where they are, in their own world, and very few are the public aquaria capable of hosting them.

Seeing the depth where it lives and the scarce number of catches, Hoplolatilus marcosi is not, however, an endangered species. The resilience is good, with the possible doubling of the population in less than 15 months, and the vulnerability index, very low, marks only 18 on a scale of 100.