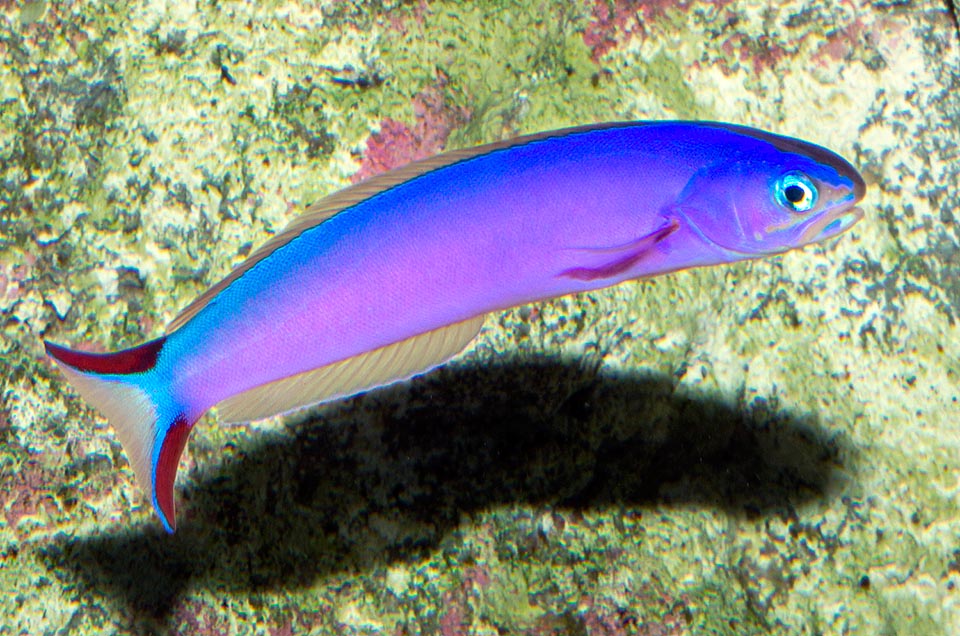 Less than 13 cm long and only recently described, Hoplolatilus purpureus covers a quite modest area in tropical Indo-Pacific at 30-85 m of depth © Giuseppe Mazza

The Hoplolatilus purpureus Burgess, 1978, belongs to the class of the Actinopterygii, the ray-finned fishes, to the order of the Perciformes and to the small family of the Malacanthidae, presently (2020) counting only 5 genera and 45 species, in possible increase due to the current researches.

The genus Hoplolatilus comes from the old Greek “ὅπλον” (òplon) = shield, the classical one, circular, used by the infantry, and from Latin “latus” = broad, with reference to the fact that these fishes mass in circle, around the entry to the den, remains of shells and madreporic fragments. Constructions at times modest but that in three deep water species may reach even 3 m of diameter. The name of the species purpureus, purple in Latin, recalls the color of this fish, that displays, however, also light blue-turquoise and purplish tonalities.

The Hoplolatilus purpureus covers a modest area. We find it in the Philippines, in Indonesia, East Timor, Papua New Guinea and Solomon Islands that mark the eastern limit to the species. 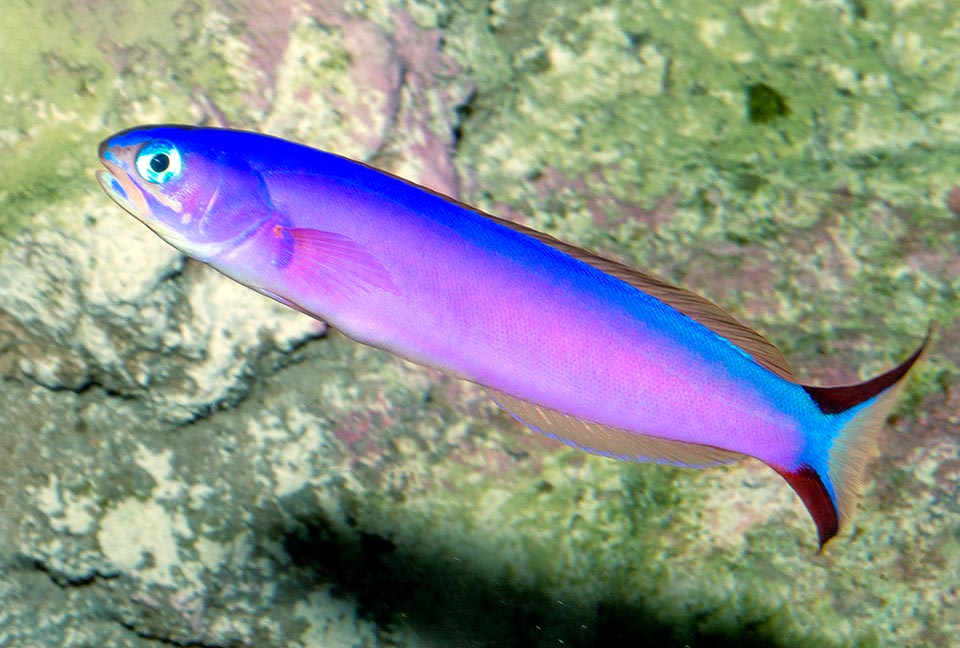 Obviously, its splendid colors change while doing down: red looks black, and finally the fish can be noted only by some blue glow © Giuseppe Mazza

It is a fish living in couples, isolated or merged in small peaceful colonies, between 30 and 85 m of depth. It spends most of its day swimming in the column of water overlying the den, almost motionless, where the currents rich in plankton pass. The rest of the time is dedicated to improving and adorning its residence and accommodation for two, where to shelter in case of danger and where to spend the night. It transports, with the mouth, one by one, the architectural elements it finds around, at times stealing them to the neighbors, and cleans up periodically the entry, modelling, when necessary, the sand with rotational movements of the body. 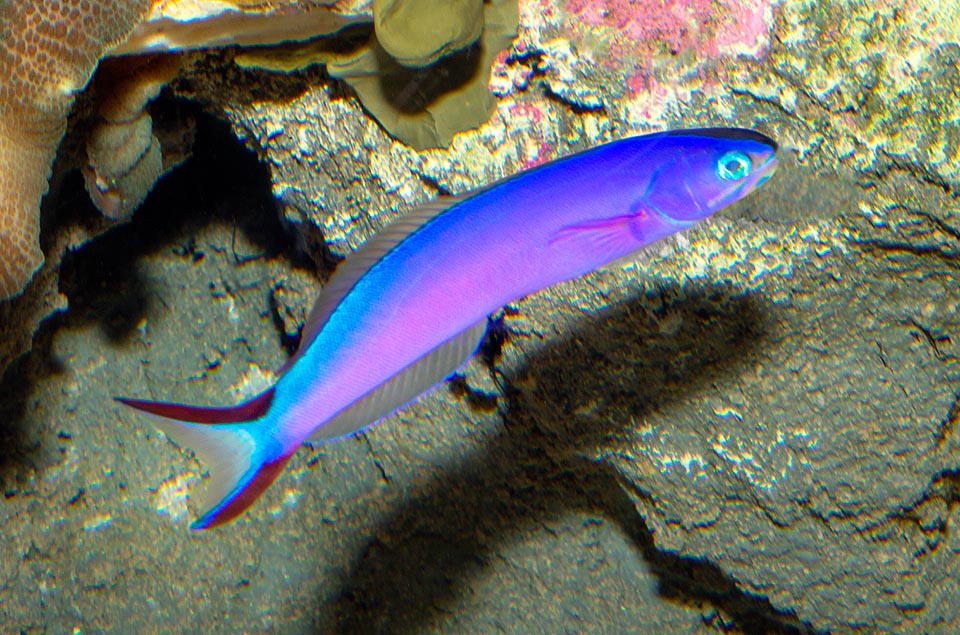 It lives in couples and builds dens with madreporic fragments, where to spend the night and to shelter in case of danger © Giuseppe Mazza

Hoplolatilus purpureus nourishes of small planktonic crustaceans, mainly copepods, of pelagic tunicates, and of the eggs the fishes entrust to the currents. Practically, it stands almost motionless into the column of water overlying its residence, actually waiting with its partner and any other species of Hoplolatilus for the food to get into the mouth.

Though we do not know much about the reproductive modalities, in fact they are extremely sociable fishes living in couples for their whole life. In their den, if alone, they do not feel comfortable and if one of the two passes away, the survivor must find another partner in the neighborhoods. 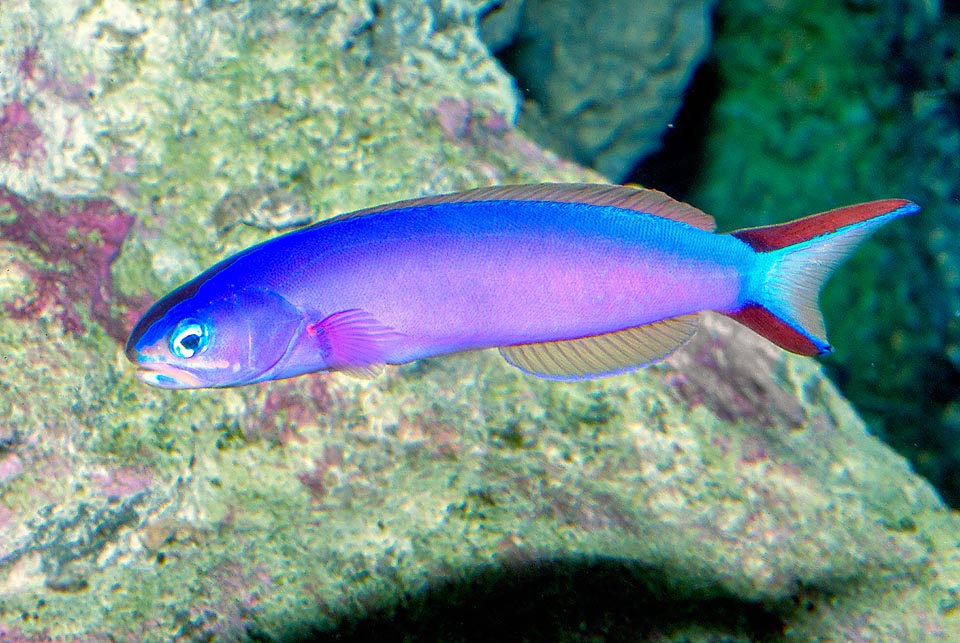 It is not always easy and so in the Philippines, where Hoplolatilus purpureus lives together with Hoplolatilus marcosi, can be at times discovered, looking out from home entrance, even mixed couples of the two species, which however have generated hybrids.

Both species are sold at dear prices for the domestic aquaria, where unluckily they do not live long. Besides the feeding difficulties, the specimens imported without too many scruples often have the liver compromised because of the catch with poison or the swim bladder damaged by the fast ascent, with no decompression.

Moreover, also Hoplolatilus purpureus displays a marked tendency to jump out from the pools, if without cover, as soon as it’s scared. It is not an easy fish and only a few public aquaria are in condition to host it.

Seen the depths where it lives and the scarce number of seizures, it is not in any case an endangered species. Resilience is good, with possible doubling of the population in less than 15 months, and the vulnerability index is decidedly low, marking just 20 on a scale of 100.