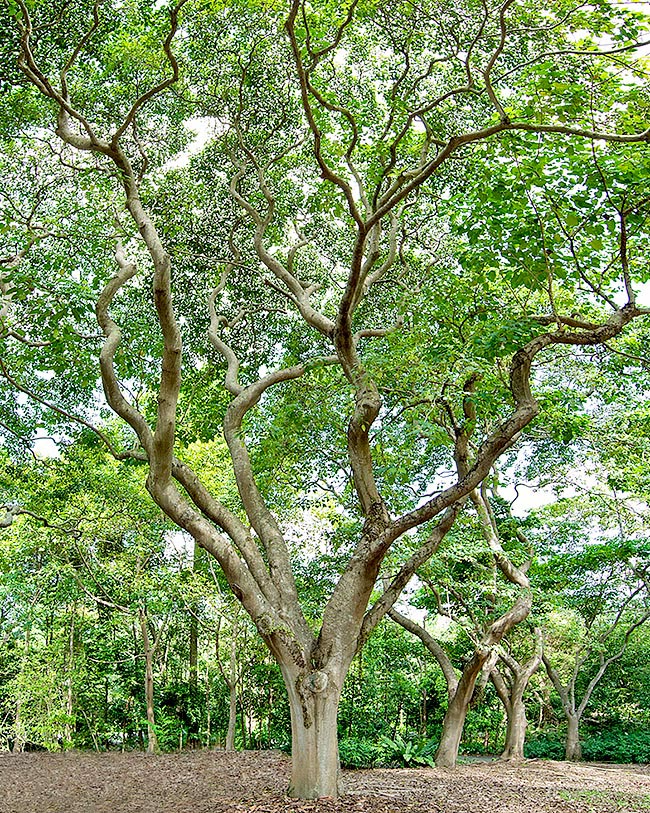 The name of the genus is that given by the natives meaning “poisonous sap”; the specific name is the present participle of the Latin verb “crepo” = to crackle, to make noise, with reference to the fruits that when ripe explode with a characteristic crackling.

The Hura crepitans L. (1753) is an evergreen or semi-deciduous tree, 10-40 m tall, with erect trunk, cylindrical, of up to 2 m of diameter at the base, and greyish bark thickly covered, on the stem and on the main branches of the youngest specimens, by robust woody conical thorns; from the wounds exudates a translucent or whitish latex.

The leaves, on a 5-20 cm long petiole provided of two glands at the apex, are simple, alternate, ovate with apex brusquely and long pointed, cordate base and slightly serrate margin, 5-25 cm long and 5-15 cm broad, of glossy intense green colour above, at times slightly villous below, in particular along the veins; stipules (appendages at the base of the leaf that have the main purpose of protecting it during the initial phase of growth) deciduous, lanceolate, about 10 mm long and 3 mm broad. 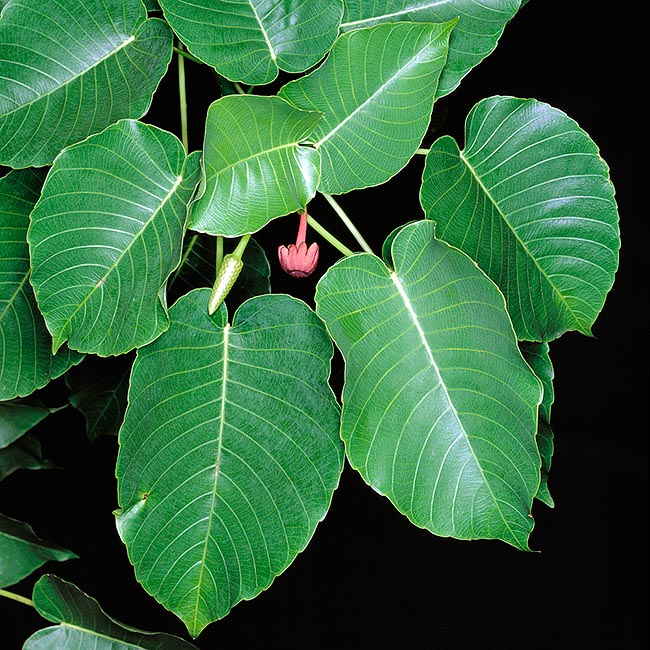 Unisexual flowers on the same plant without petals, the male flowers, sub-sessile, are grouped in conical terminal inflorescences, of dark red colour, 4-6 cm long and of 2 cm of diameter, with tubular calyx irregularly toothed, about 3 mm long, and 8-20 stamina, 5-10 mm long.

Solitary female flowers at the axil of the upper leaves or at the base of a male inflorescence, on a 1-1,5 cm long peduncle, that elongates up to 6 cm in fruit, with truncated tubular calyx, about 0,5 cm long, ovarium inside the calyx, column 2-5 cm long, and stigmatic disc (circular structure that originates from the concrescence of the stigmata), of 1,5-2,5 cm of diameter, subdivided in 11-16 lobes with obtuse apex arranged radially of purple red colour.

The fruits are woody dehiscent capsules, compressed and concave at the two extremes with up to 16 prominent ribs corresponding to the carpels arranged radially around the axis, about 4 cm tall and of 8 cm of diameter, of initially green colour, then brown when ripe, containing flat ovoidal seeds, oily, of brown colour, one for each carpel, of about 2 cm of diameter. When the fruit is dry the seeds are expelled noisily and violently, even up to more than 20 m far in absence of obstacles, dispersion mechanism common to many other Euphorbiaceae.

It disseminates easily during the floodings, being the seeds floating, so much to naturalize and often behave as pest in the zones where the tree has been introduced. It propagates by seed, that has a short germinability, previously kept in water for one day, in organic loam with addition of sand or perlite for a 30% maintained humid at the temperature of 25-28 °C, with germination times of 1-2 months; it reproduces also by cutting and air layering. Imposing tree with very ornamental foliage and flowers and fruits of particular shape, utilized at times as shade tree in the cocoa plantations and as ornamental in parks, large gardens and as road tree in the tropical and subtropical climate zones, not bearing temperatures close to 0 °C, if not exceptional and for short times. 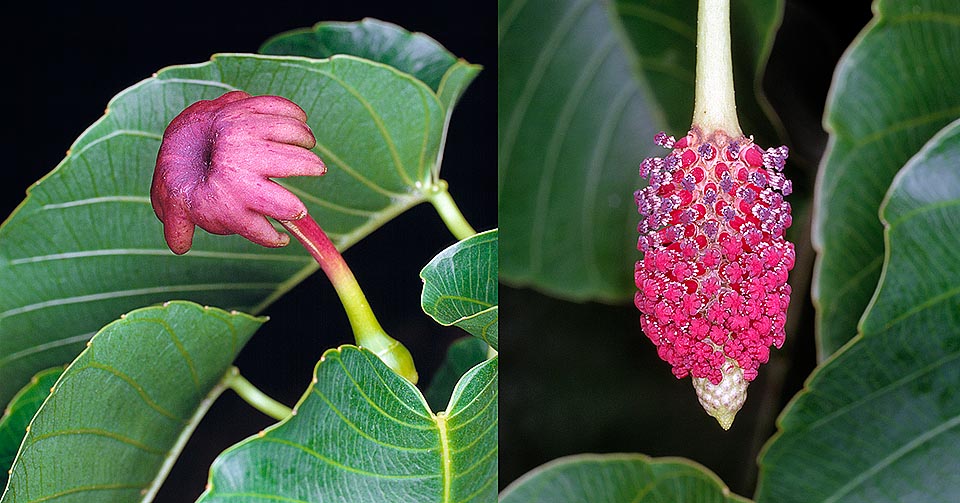 It requires full sun or partial shade and is not particular about the soil, from moderately acidic to slightly alkaline, provided draining and maintained almost constantly humid.

All parts of the plant are poisonous, in particular seed and latex. The seeds, if ingested, may cause severe gastrointestinal effects and have a violent laxative action, even if in limited number (2-3), due to the presence of a highly toxic compound (polypeptide), with action similar to that (ricin) contained in the seeds of the Castorbean (Ricinus communis L.). The latex, highly irritant and carcinogenic, when in contact with the skin may cause serious dermatitis and with the eyes keratoconjunctivitis and temporary blindness. The inhalation of the sawdust, while working the wood, may cause serious effects in the breathing apparatus, as well as the contact with the eyes, its is therefore necessary the use of dust masks and of safety goggles. 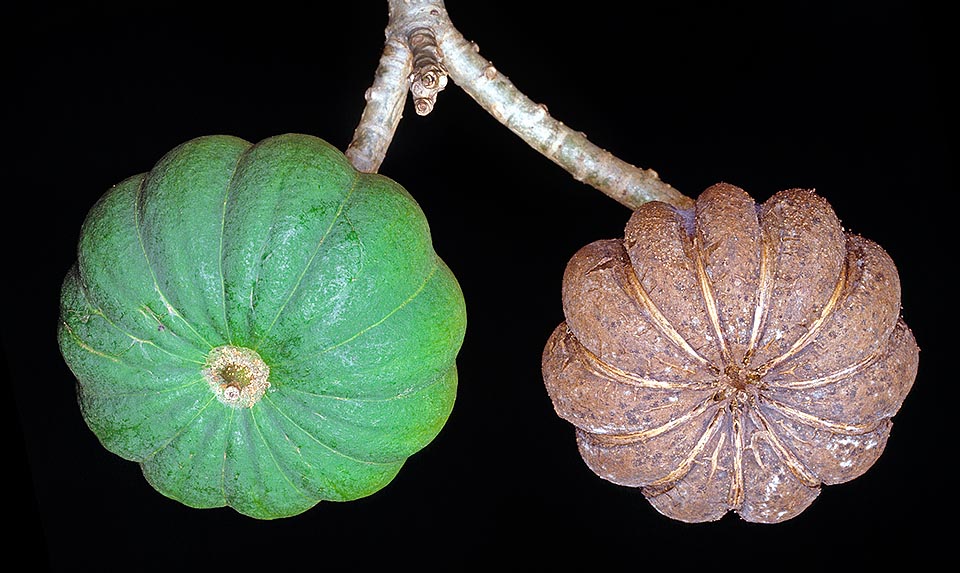 Unripe and ripe fruit. They are woody dehiscent capsules that eject the seeds even 20 m far. All parts of the plant are poisonous, particularly seeds and sap © G. Mazza

The wood, pale yellow, light, easy to work and to finish, but little resistant to the xylophagous insects, is utilized for inner parts of the houses, boats, furniture, packagings, plywood, craft and art objects and as fuel. The latex is used locally for stunning the fishes thus facilitating the catch and among the Amazonian natives for poisoning the arrow tips. Despite the high toxicity, various parts of the plant are utilized in the traditional medicine of various populations. The woody sections of the capsule, polished and eventually painted, are utilized as costume jewelery accessories. In the past the unripe fruits has been used as sand container for drying up the ink, hence the common name in English.