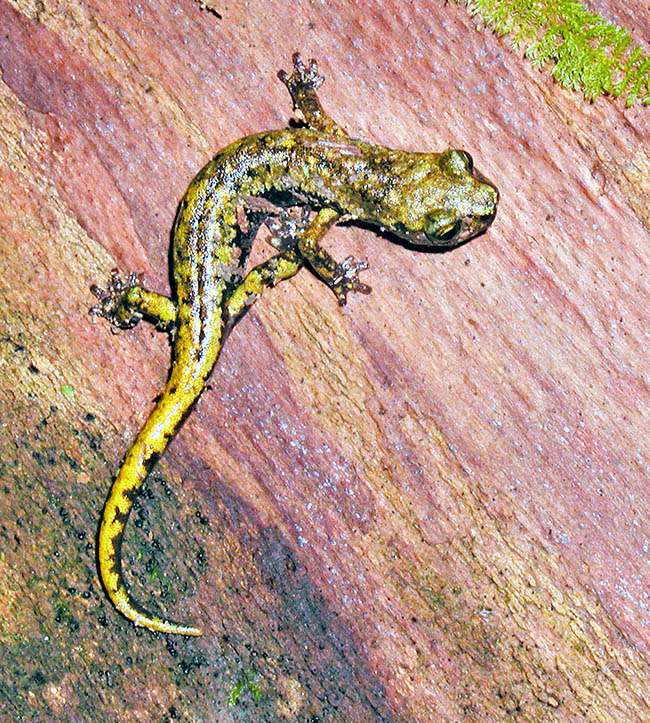 Strinati’s cave salamander (Hydromantes strinatii) is an Italian-French endemic species. Present in South-East France, we find it in Italy in the belt between Ligurian Alps and the northern Apennines © Giuseppe Mazza

This family includes the 70% of the Urodeles presently described.

Its diffusion, mainly North American, goes from Canada to Brazil and Bolivia in the New World, and from south-western Europe up to South Korea.

The name of the genus Hydromantes comes from the Greek “ὕδωρ” (hydro), water, and “μαντις” (mantis), soothsayer. Hence, it literally means “water prophet”.

The specific term strinatii, of Strinati, in Latin, recalls Pierre Strinati, Swiss speleologist and scientist, fabric shopkeeper, born in Cologny in 1928, who discovered this species.

Nowadays the taxonomy of this genus has deeply changed, accepting 8 European species, five of which are endemic to Sardinia, two endemic to Italy, and one present between Italy and France.

Unlike its European congeners, the Strinati’s cave salamander is the only European species of the genus Hydromantes not exclusive to Italy. The Italian distribution area includes five regions, Emilia-Romagna, Liguria, Lombardy, Piedmont and Tuscany, interesting the belt included between the Ligurian Alps and the Northern Apennines. In France it is present in the south-eastern part of the country, in the Department of the Alpes-Maritimes, and in the easternmost regions of the Department of the Alps of the Haute Provence. 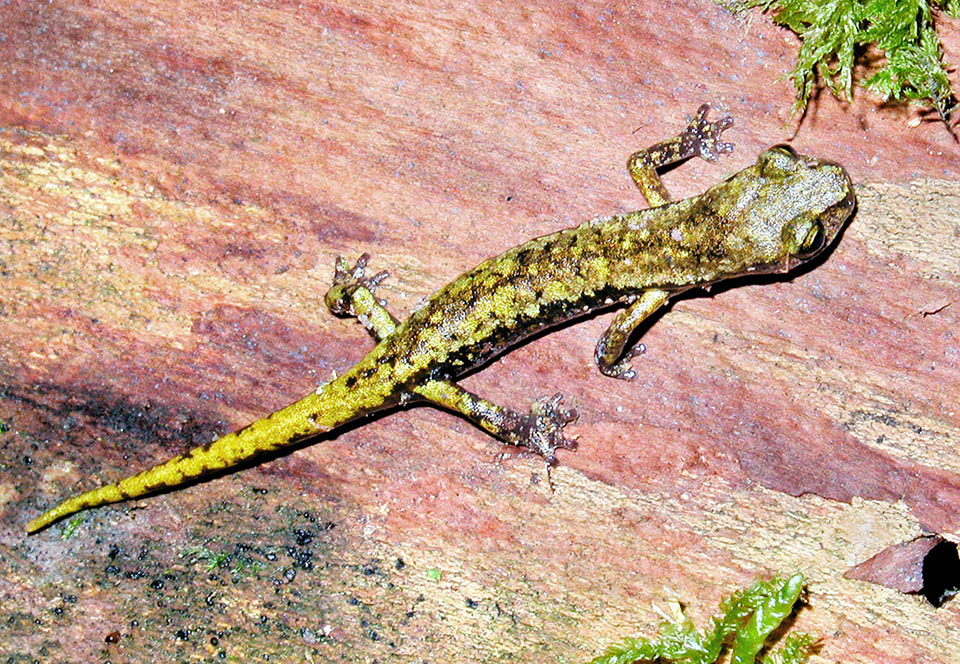 The males can be 116 mm long, the females 128 mm. The dorsal pattern, with a vast range of colours, stands always on dark background © Giuseppe Mazza

The Strinati’s cave salamander is the most Euryzonal species in its genus, having been found from the sea level, at 20 m above the sea level, in Imperia, up to more than 2000 m of altitude, 2280 m in the Ligurian Alps.

Like the Italian cave salamander also the Strniati’s one is a hygrophilous species, that is, tending to colonize cool valleys excavated by streams, or more humid or shady slopes. 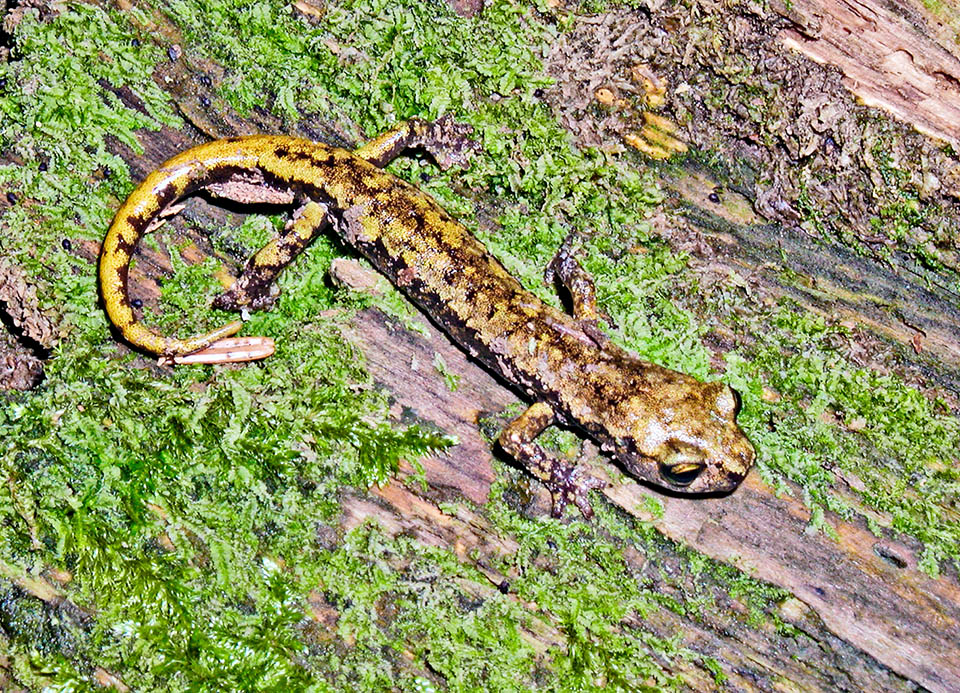 Present from 20 to about 2000 m of altitude, it’s a hygrophilous species, visible in the open only the night or in particularly wet days © Giuseppe Mazza

Hydromantes strinatii often frequents the woods but can be found also in contexts poor in vegetation.

Usually, it spends the warmest hours of the day sheltering in holes, under stones, rotten trunks, small walls or in either natural or anthropic hypogeal cavities.

Also for this species the hypogeal cavities are the preferred environments due to the optimal conditions of humidity and temperature as well as for the diversity of prey they offer. 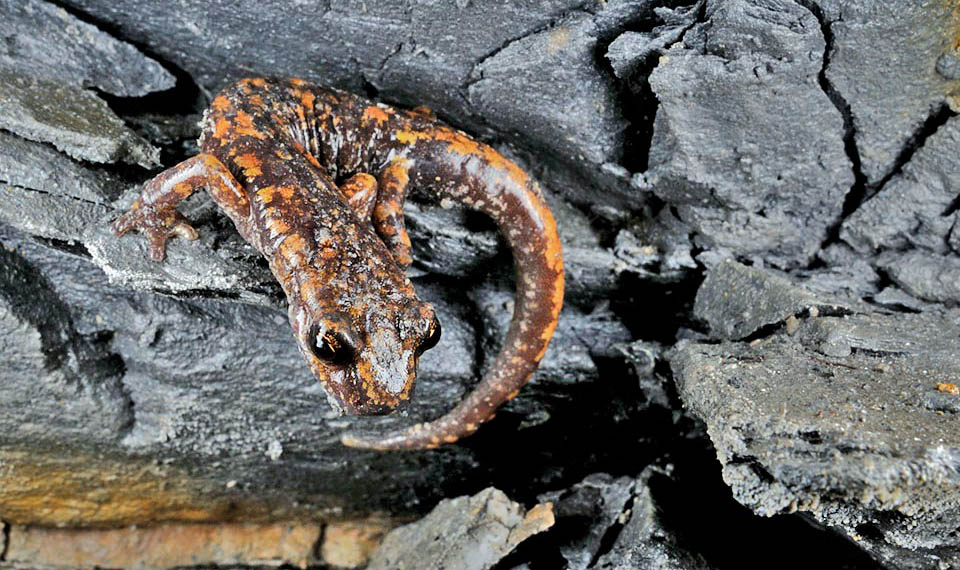 The epigeal activity is mainly nocturnal, but they can be observed even during the day if the climate is particularly humid.

The Strinati’s cave salamander has been found at temperatures from 5 to 22 °C and with a humidity rate between 74 and 100%.

The major predators of this species appear to be the common toad and the slowworm. To avoid predation they have developed some characteristic defensive attitudes: postural stiffening and repulsive skin secretions. 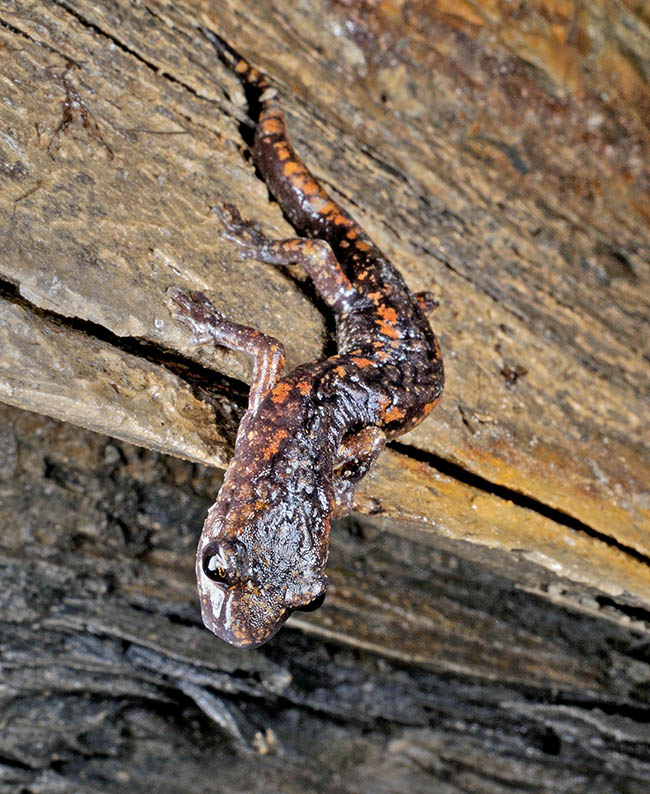 The salamanders of the family Plethodontidae do not present a high inter and intra-specific morphophysiological diversity.

Therefore, at a diagnostic level the morphophysiological traits have a decidedly poor value, that is, in return, filled by a high genetic diversity.

The distinction with the other Italian species, especially with the Italian cave salamander (Hydromantes italicus) and the Ambrosi’s cave salamander (Speleomantes ambrosii) stand only on a geographic basis, and it is not possible through genetic analyses.

Hydromantes strinatii is a salamander of medium size: the male reaches 116 mm whilst the female may reach 128 mm.

The “canthus rostralis”, that is the angle forming on both sides between the flat crown of the head and the zone between the eye and the snout, is obtuse and is generally well visible.

It has small feet; the fingers have not or slightly enlarged extremities that can be truncated or rarely pointed.

Throughout the whole range the colouration and the dorsal drawing of the adults is quite variable, even inside of one same population.

The dorsal pattern stands always on a dark, burnt umber to bistre or blackish coloured background.

The dorsal speckling can vary, from almost monochrome to polychrome, and embraces a wide range of colours, variously shaded, and bright: brown, yellow or ocher red, grey or pearl grey and green; at times the yellow and the grey can look metallic.

In the young specimens the dorsal colouration can be brown with a different diffusion of yellow or may appear uniformly golden.

The belly has a nut to dark bistre, speckled or sprinkled with white, background colour. 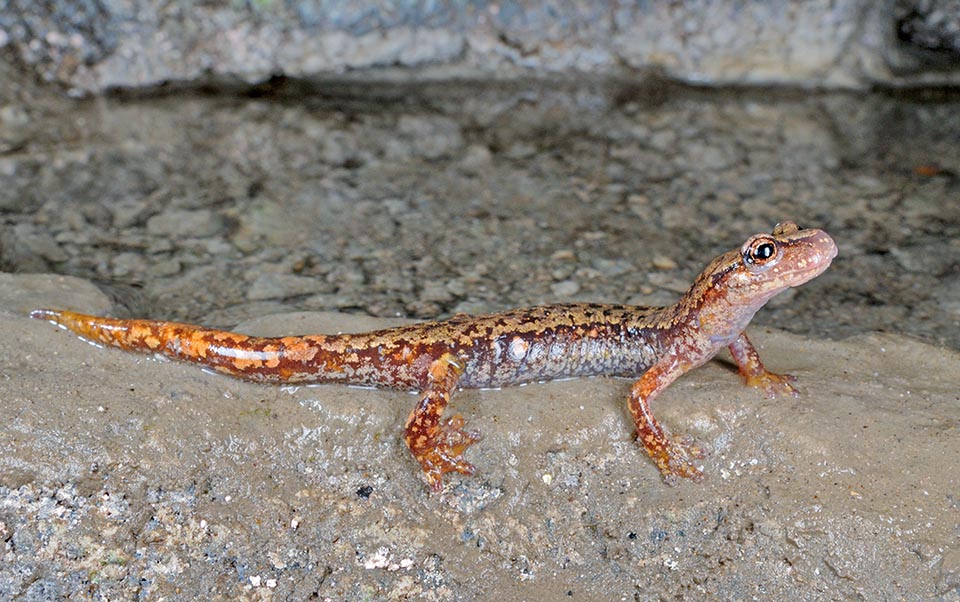 Temperature is constant, humidity very high, often fed by small water streams, and there are no toads or slowworms in ambush © Nicola Destefano

In this species the sexual dimorphism may be noted in some characters.

In the males, distinctive characters are the presence of the glandular area under the chin that creates aphrodisiac secretions for the mating ritual, and the visibly more developed naso-labial tendrils.

The sexual maturity is reached in different periods between males and females, in the males between 3 to 4 years, whilst in the females stands between 4 to 5 years. 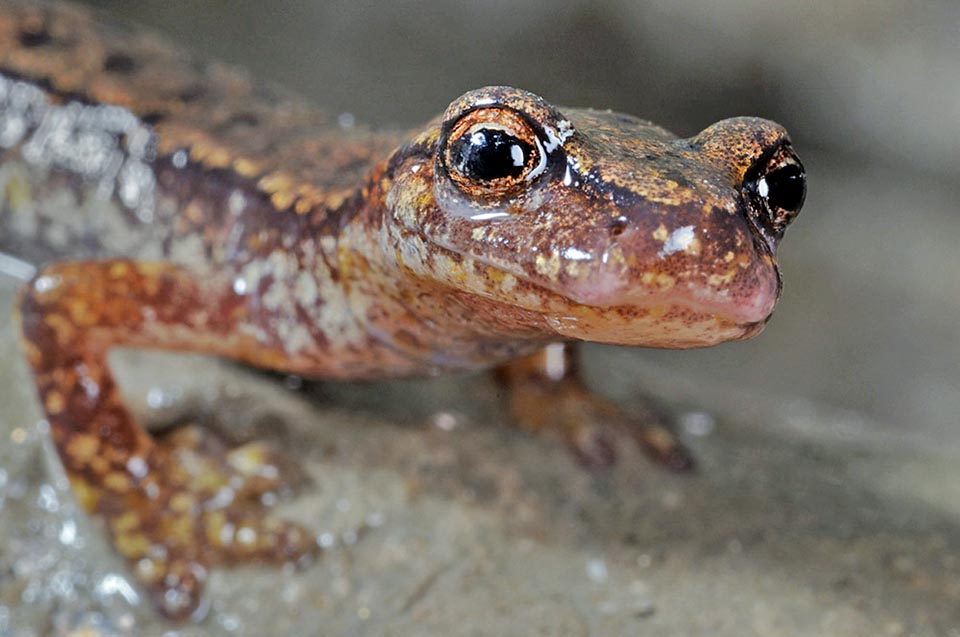 Due to the good eyesight and smell, here calmly hunts small gastropods and small animals that move between epigeal and hypogeal world © Nicola Destefano

The Strinati’s cave salamander is an oviparous species that usually lays 7 to 11 eggs per brood.

The reproductive period occurs mainly in spring, but there are many observations during the whole year, changing also depending on the location and the climate and environment conditions. 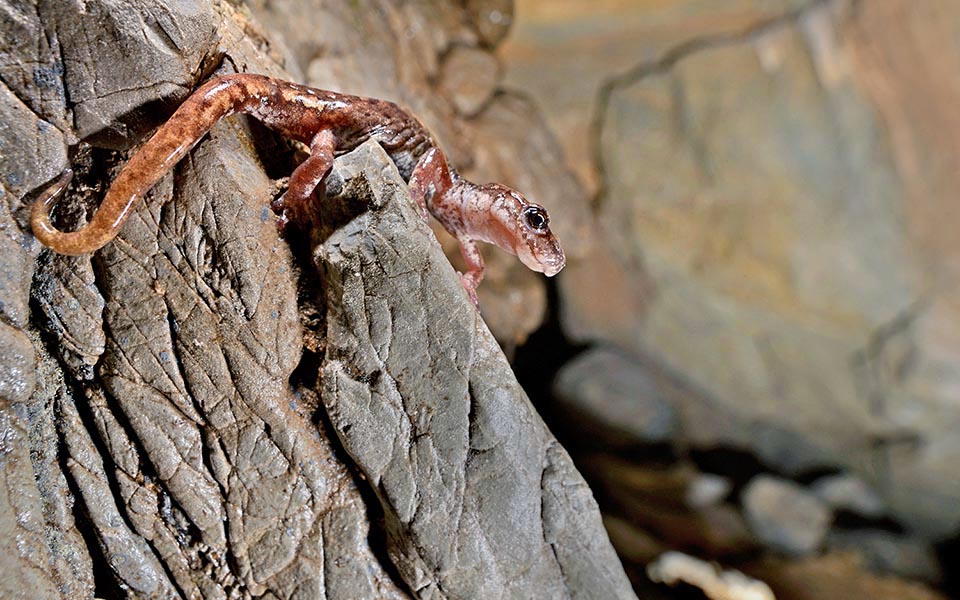 The fecundation is internal, with the release of a capsule containing the sperm, called spermatophore, placed on the soil and immediately picked up by the female that absorbs it in its cloaca.

In this species is present a courting ritual, characterized by the diffusion, by the male, of aphrodisiac secretions released by the glandular area, utilized for exciting the female. The female implements parental care towards the eggs, curling up on them waiting for the hatching. The eggs, unlike most amphibians, are terrestrial and have a direct development. 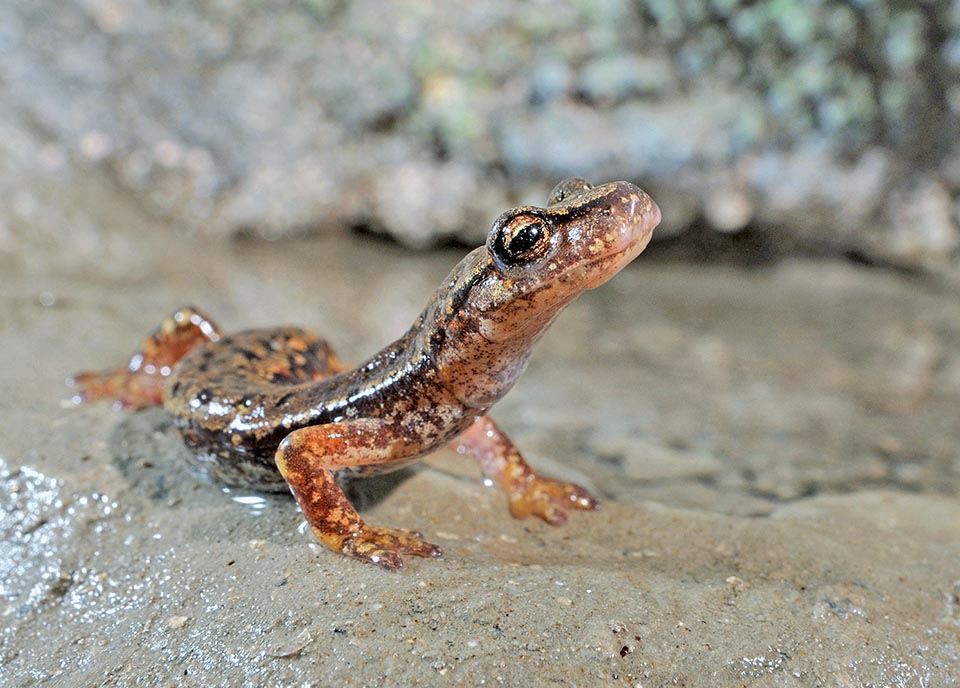 Fecundation is complex. After the foreplays the male in fact lays on the soil a capsule with the sperm and the female must pick it up and introduce into the cloaca © Nicola Destefano

As a matter of fact, when they hatch, the smell beings are already suitable for terrestrial life and therefore do not present any gills. Upon the birth they measure 22-24 mm and are very similar to the adults.

The Strinati’s cave salamander is a relatively common species, locally very frequent, especially in areas rich in hypogeal environments, like the karst ones. 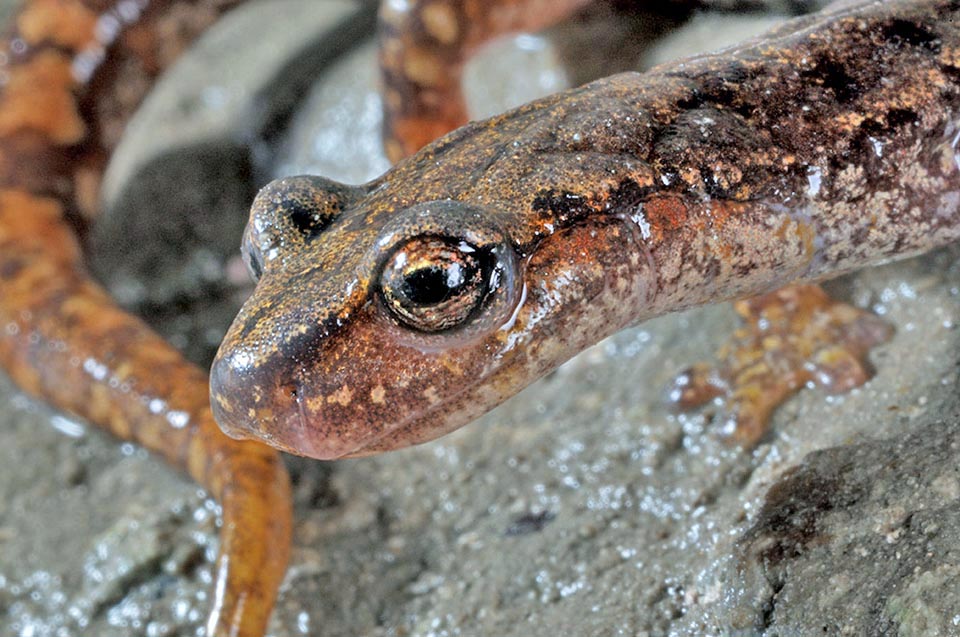 The Strinati’s cave salamander eggs, unlike what happens for most amphibians, are not laid into the water but are terrestrial with direct development. The female protects them curling up around them till the hatch. The 22-24 mm long young, have no gills and are already quite suitable for the terrestrial life © Nicola Destefano

The main threat for this species is probably the alteration of the habitat.

The Strinati’s cave salamander is assigned to the category NT (near threatened, potentially threatened) in the red list of the Italian vertebrates of IUCN.