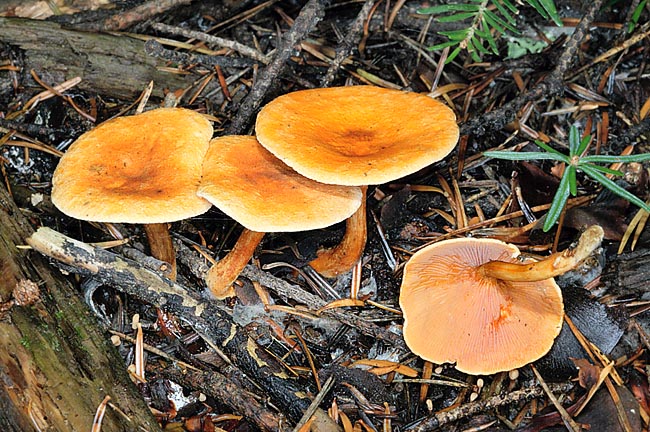 After some Hygrophoropsis aurantiaca is edible, but it’s not good to collect it being uncommon © Giuseppe Mazza

The term aurantiaca comes from the Latin “aurantíacus” = concerning the oranges, of the same colour as the oranges.

To the family Hygrophoropsidaceae belong fungi with chanterelloid deportment, with colours going from the yellow-orange to the orange-yellow to the orange brick; surface felted to fibrillose; whitish to bright orange gills, more or less detachable from the flesh of the cap. White spores in mass. To the genus Hygrophoropsis are ascribed species with chanterelloid or omphaloid deportment, smooth or finely scaled, felted cap; decurrent gills on the stem, bifurcate. White or pale yellow spores in mass. 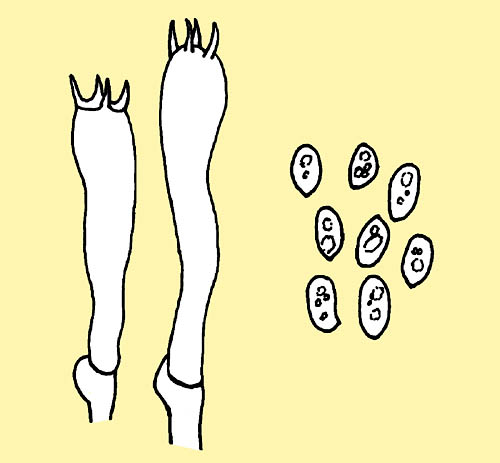 Stem: 2,5-5 x 0,7-1,5 cm, cylindrical, attenuated downwards, flared under the gills, at times curved or even sinuous, often eccentric, full then hollow, glabrous, of the same colour as the cap or even somewhat darker.

Flesh: thick at the centre, thin at the margin, soft, white to pale orange, brownish at the base of the stem. Slight smell, sourish taste.

Habitat: grows in summer and in autumn in the needle woodlands and in the beech woods, on rotting vegetal residues, often in troops of various units. Not very common.

Remarks: it is not a very common species, which, due to its colour, may be mistaken with the excellent Cantharellus cibarius (Fries : Fries) Fries; which, however, has the hymenophore formed by pseudogills, ribs or anastomosed pleats of the flesh; moreover, it smells of apricot.

Another resemblance might occur with Omphalorus olearius (De Candolle) Singer, but it is bigger and the gills are not forked and the lamellulae are present. The Hygrophoropsis morganii (Peck) H.E. Bigelow differs easily because smaller and having a strong aromatic odour similar to cinnamon or burnt sugar. The Hygrophoropsis aurantiaca is by some authors considered as edible; we do not recommend its consumption, both for its rarity, both for the absence of sure evidence of its edibility.