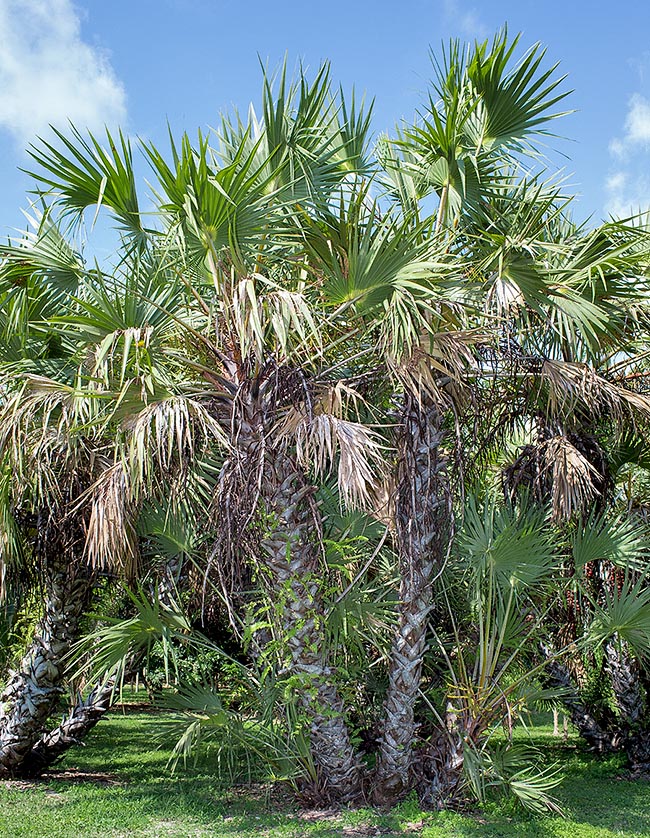 With erect or decumbent stems even 7 m long, Hyphaene coriacea is a slow growing dioecious species, often cespitous, native to eastern-central-southern Africa, Juan de Nova and western Madagascar where it grows in the savannahs, along the coasts, near rivers, lakes and swampy zones or where is availability of underground water © Giuseppe Mazza

The species is native to central-southern eastern Africa (Ethiopia, Kenya, Mozambique, north-eastern South Africa, Somalia and Tanzania), Juan de Nova and western Madagascar where it lives in the savannahs, along the coasts, close to rivers, lakes and swampy zones or wherever there is availability of water underground, at low altitudes, on mainly sandy soils.

The name of the genus comes from the Greek verb “ὑφαίνω” (hyphaino) = to weave, to braid, with possible reference to the interweaving of fibers in the pulp of the fruit; the specific name is the Latin adjective “coriaceus, a, um” = coriaceous, with reference to the “skin” of the fruits.

The Hyphaene coriacea Gaertn. (1788) is a variable cespitous dioecious species, solitary at times, usually with 2-6 erect or decumbent stems, up to 7 m long and of 30 cm of diameter, occasionally dicotomically ramified once or twice, of grey colour and fissured vertically.

The leaves are strongly costapalmate, about 1 m long and 0,7-0,8 m broad, divided in 40-60 rigid linear-lanceolate segments with acuminate apex just bifid, long in the central part 65-80 cm and up to about 5 cm broad, united at the base for less than 1/3 of their length, of greyish green to bluish grey colour. The petiole, 0,6 m long and about 3 cm broad, is provided on the margins of robust blackish spines bent upwards about 1 cm long; the foliar bases, about 40 cm long and longitudinally fissured in correspondence with the petiole, of brown colour and covered by a greyish waxy patina, remain long time on the plant.

Inflorescences between the leaves (interfoliar), the male ones 0,6-1 m long, ramified, with rachillae, solitary or in groups of 2-4, and yellow-greenish flowers arranged sunken in groups of 3, that open in succession, with 6 stamina. Female inflorescences 0,8-1,6 m long; with 2-5 rachillae bearing solitary flowers, on a short hairy pedicel, with tri-carpellate gynaeceum. The fruits, that usually develop from one only carpel, have a very variable shape even in the same infructescence, from almost quadrangular to pyriform, about 6 cm long and 5 cm broad, of glossy reddish brown colour when ripe, with fibrous pulp, containing one ovoid seed about 3 cm long. 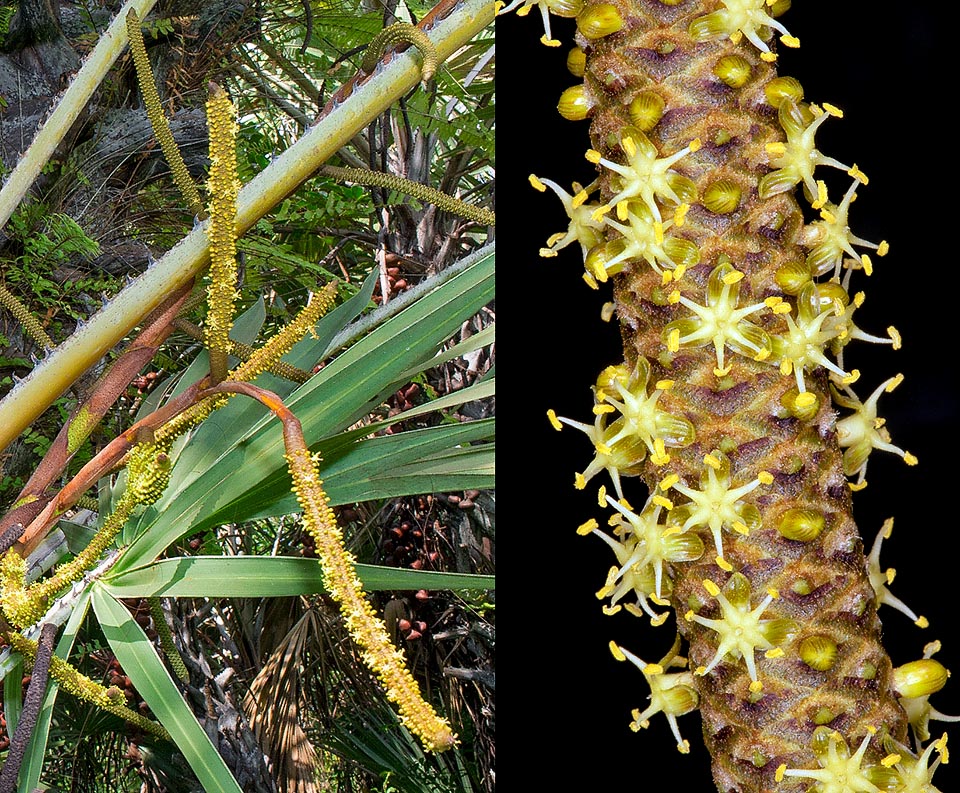 Male inflorescences and close-up of the flowers with 6 stamens opening in succession. The fibers of the leaves serve to fabricate mats and baskets. From the lymph they get a drink rich of vitamins, in particular the B2, but this causes the death of the plant, same as the removal of the edible buds, the infamous “hearts of palm” © Giuseppe Mazza

It usually reproduces by seed, usually placed directly on the ground or in 40-50 cm deep containers, seen that the hypocotyl developing from the seed, and on whose extremity stands the embryo from which the plant will originate, goes up to these depths; the hypocotyl is particularly frail, hence great care is needed during the phase of germination. To accelerate the germination, that usually takes quite long times, the seeds are to be cleaned from the pulp and kept in water, changed daily, for 8-10 days, then are to be put in sandy loam maintained humid, but without stagnations, at the temperature of 28-30 °C; the first leaf, in the best cultivation conditions, will begin to emerge after about two months.

The particularly slow growth has perhaps been the main reason of its scarce presence for long time out of the origin zones for ornamental purpose, despite the relatively contained dimensions and then more manageable than the other species of the genus. Cultivable in full sun, also during the initial phases of growth in the tropical and subtropical climate zones humid as well as semi-arid, and in the milder temperate-warm ones, where it can bear occasional temperatures just under the 0 °C for a very short time. 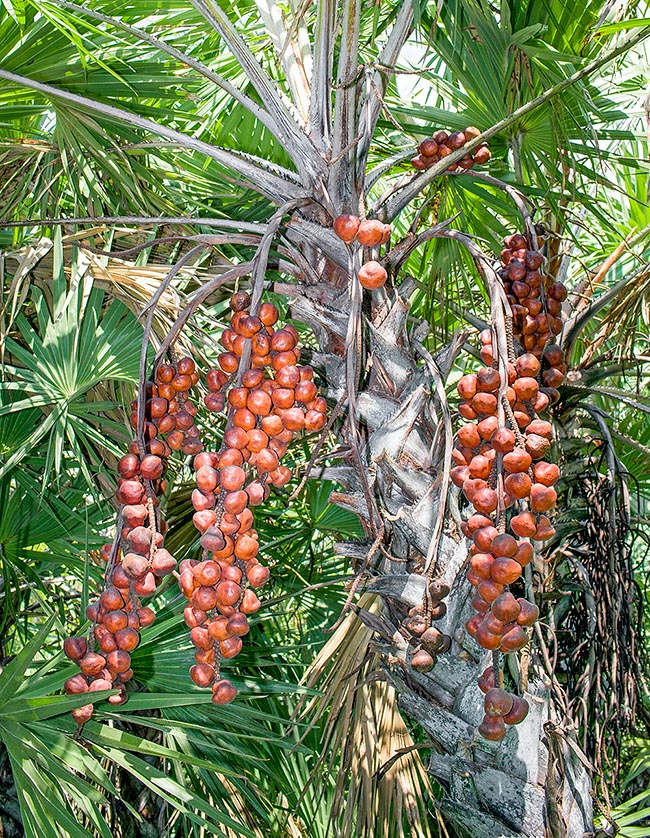 The edible fruits, of sweetish taste recalling ginger, have fibrous pulp. About 6 cm long, from almost quadrangular to pyriform, they are of reddish brown colour, glossy when ripe. They represent a very important food resource for the local fauna, especially baboons and elephants, that contribute to the dispersion of the seeds © Giuseppe Mazza

It is absolutely not particular about the soil, growing even in the poor ones, little draining, moderately saline and alkaline, and can bear when adult periods of drought, but gets a luxuriant look and particularly ornamental if cultivated in rich soils, draining, preferably sandy, and regularly watered during the dry periods.

Spread in eastern central-southern Africa, it has a fundamental rôle, like the congeneric species, in the life of the local populations. The most utilized part are the leaves, from the emergent ones still enclosed they get about 1/3, thus making a minimal damage to the plant, from which, with an appropriate process, are obtained the fibers that are amply employed for fabricating mats, baskets, headgears and other handicrafts of common use or artistic, that also represent an economic resource for the local populations.

The fruits are edible, with a sweetish taste that reminds the ginger, but with a very fibrous pulp, that are mainly intended for feeding the cattle; the endosperm of the unripe ones has a taste similar to that of the coconut.

From the pollarded stems is collected the lymph from which they get a very popular alcoholic drink, rich of vitamins, in particular the B2, operation that unluckily causes the death of the plant or of the stem in the cespitous ones. Same outcome has the use as vegetable of the vegetative apex and of the young buds.

The pulp of the fruits is locally utilized against the intestinal disorders. The endosperm of the ripe fruits, particularly hard, is utilized to realize small handicrafts and artistic like vegetal ivory. Finally, the fruits are an important feeding resource for the fauna, in particular baboons and elephants, that contribute in the dispersion of the seeds.