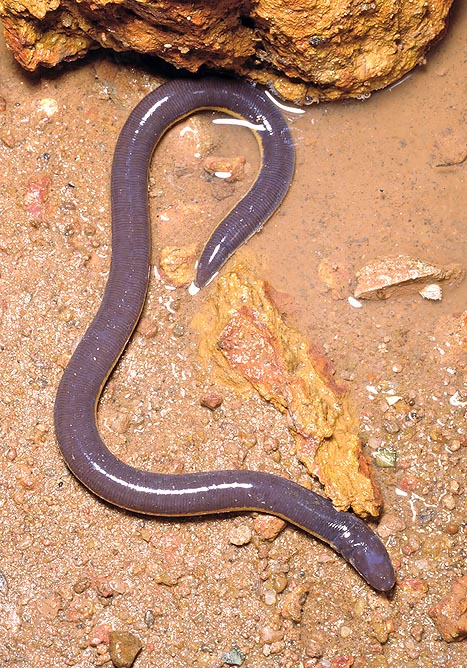 The order of the Apodes (Apoda), in the past called by the zoological biologists Gymniophions (Gymnophiona) or Caecilians (Ceciloforma), is the smallest and the least studied, even nowadays, in the class of the Amphibians (Amphibia).

The species afferent to this order, are not “relatively” many in quantity and variety, if compared with that of the Anurans (Anura) and that of the Caudates (Caudata); we write “relatively” in inverted commas as it however includes about 167 species, which is a consistent number by itself, even if small compared to that of the other two orders. In the specific, among the various species of Caecilians nowadays known to the Biology, one of the first to be discovered and characterized during the sixties of the last century by the zoological biologists, is the Ceylon caecilian or Fish-snake amphibian (Ichthyophis glutinosus Linnaeus, 1758), species afferent to the class of the Amphibians (Amphibia), order of the Apodes (Apoda), family of the Caeciliids (Caeciliidae), by other authors identified with that of the Ichthyophiids (Ichthyophidae), genus Ichthyophis.  The IUCN deems this species as quite common, but this does not apply to all the other species of these amphibians.

The Ceylon caecilian is localized in Sri Lanka, southern India, Indochina and in South America.

Most caecilians do live in habitats such as loose soils and deep litters in the tropical forests, few also in the rivers and in the creeks. The Ceylon caecilian, being totally terrestrial species, is not an exception and, as a matter of fact, lives in the muddy soils and in the swamps.

The caecilians’ common general lines coincide with an ossified and pointed head which they utilize for digging holes inside which they quickly shelter when a predator approaches, such as a serpent, a turtle, a bird and some types of mammals. The main sense is the smell; the small eyes, in some species even covered by a membrane, denote a very poor sense of vision. All species are carnivorous, as they nourish of earthworms, termites and other invertebrates; some big specimens have been sighted while eating little mice and small reptilians.

They are ambush predators, they jump on the preys when these ones, unaware, get close, holding them in the mouth with a double row of teeth in the upper jaw and a single or double row in the lower one.

The Ceylon caecilian has numerous rings, often up to 400, along the dark body (which in some instances is violet-grey, with bright blue reflections), tapered and cylindrical; this gets them resembling to a huge earthworm. 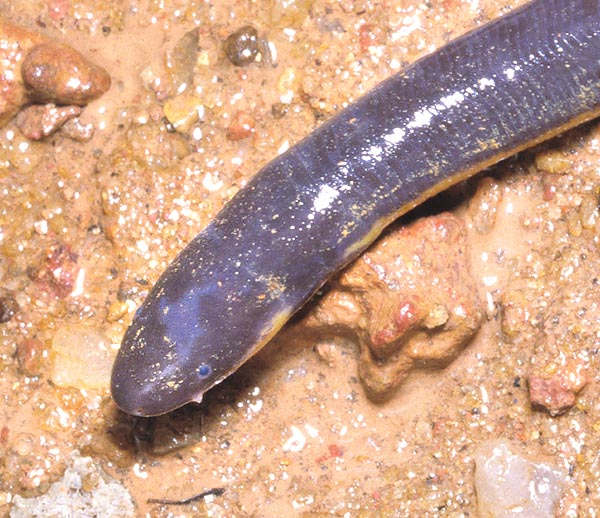 The belly is pale brown and a yellow streak marks clearly both sides from the head up to the tail. The head, used for digging, is ossified, small and oval. A tiny retractable tentacle, between the eye and the nostril, is an even organ utilised for perceiving the chemical stimuli of the ambient, thus reinforcing the smell, already in itself developed.

The eyes, as seen in the general morphological lines of the order, are small, barely visible and covered by a layer of skin, almost useless for the physiological utilization. The tail is short.

This caecilian carries on a mainly hypogeal life, emerging from the ground only occasionally, for instance for reproducing. It is active all along the day; its size goes from 30 to about 50 cm, there is no evident sexual dimorphism, either seasonal or permanent.

Insemination is internal in all caecilians, with the male which exits part of the cloaca thus inserting the sperm into the female. Some oviparous species lay the eggs into the water where they develop in floating branchiate larvae; other, oviparous too, lay the eggs sunken into the ground and from which develop miniaturized copies of the adults. In several other species, ovoviviparous, the females keep the eggs inside the body, delivering alive young.

The female of Ceylon caecilian, once fecundated by the male, lays up to 55 eggs, small and white, in a burrow close to the water and surveys them, wrapping its body around them, till when they do hatch. The out coming larvae, aquatic, move immediately, swimming towards a pond or a stream. Some biologists of the eighties of the XX century have documented by filming that the progeny eat the maternal skin, by tearing it and taking the shreds; the skin regenerates immediately thus providing nourishment till when the young do not wean.