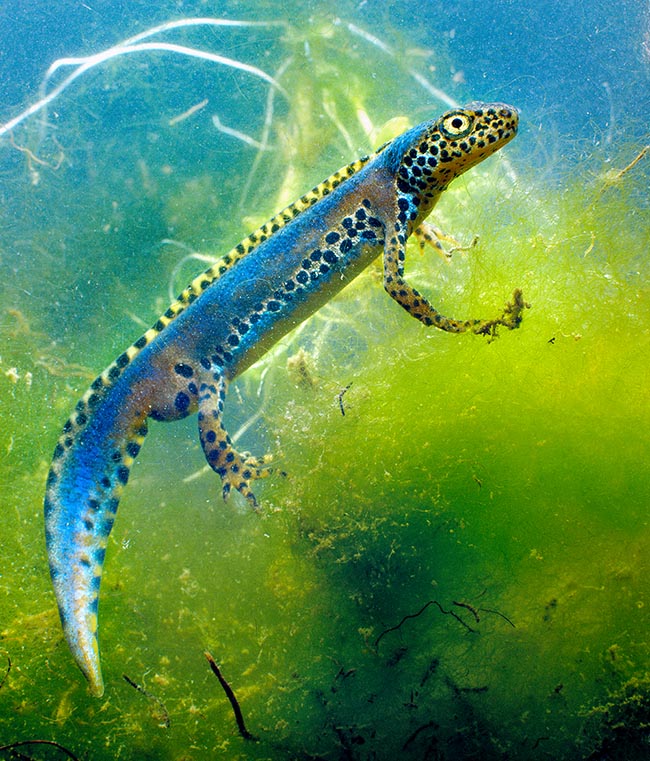 The Alpine newt, Ichthyosaura alpestris (Laurenti, 1768), is an amphibian belonging to the order of the Caudata, family Salamandridae, present all over Central Europe.

The family Salamandridae is mainly spread in Europe and in Asia.

Few genera, some of which are endemic, are present also in North Africa and in North America.

The most diffused characters in the species of this family are: the presence of toxic substances in the skin and the internal fertilization by using a spermatophore, absorbed by the female after a particular courting dance.

The Alpine newt is the only extant species of the genus Ichthyosaura, Sonnini de Manoncourt and Latreille, 1801.

The name of the genus Ichthyosaura comes from the old Greek, formed by “ἰχθύς” (ichthýs) = fish and “σαύρα” (saúra) = lizard, with reference to its look of aquatic lizard, whilst the specific epithet alpestris, of the Alps in Latin, reminds us that it is present only in mountain areas.

Ichthyosaura alpestris is a species having a vast range. Starting from the north of Spain, it is present, crossing Europe, up to the Carpathians that form its north-eastern limit and to the south it reaches central-southern Italy and Greece. 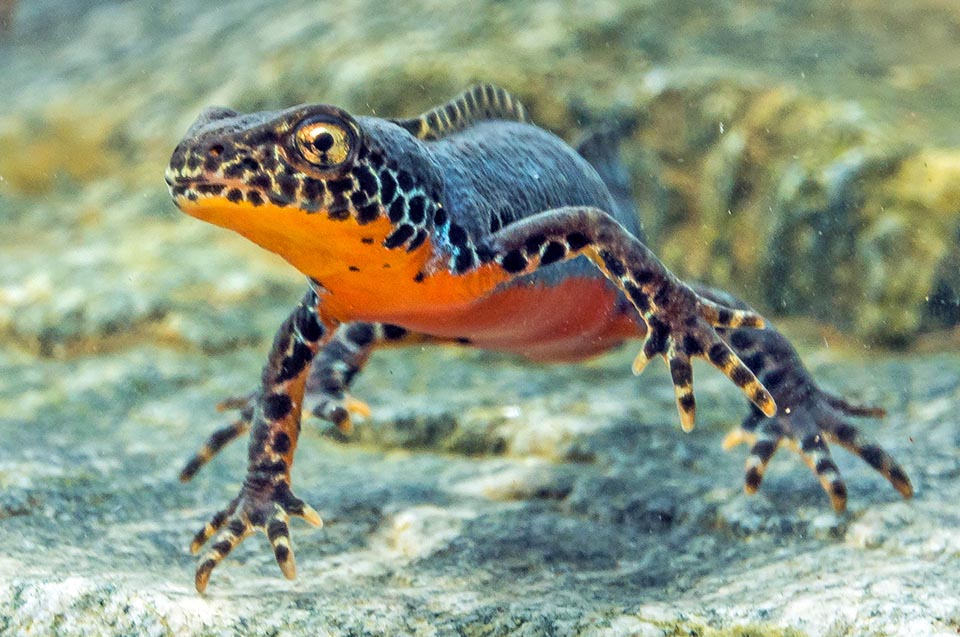 The populations of central Greece and those north to Peloponnese fall within subspecies Ichthyosaura alpestris veluchiensis. Other possible subspecies in the Balkans and in East Europe have been observed and are in discussion. 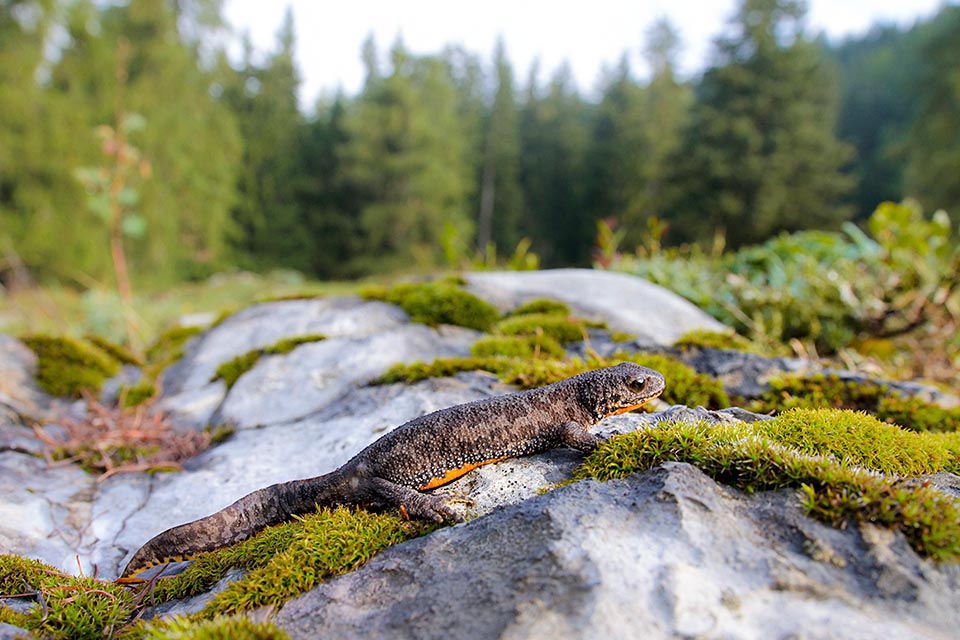 It is a species spending a lot of time in the water, present in a great variety of habitats: high mountain lakes, water surfaces or slow-flowing streams, up to artificial water points, peat bogs or ditches. Hardly spends the winter in water, but it is not rare, especially in the populations living in cold mountain lakes, to find neotenic individuals, that is that still conserve the gills, even if they have passed the larval stage. 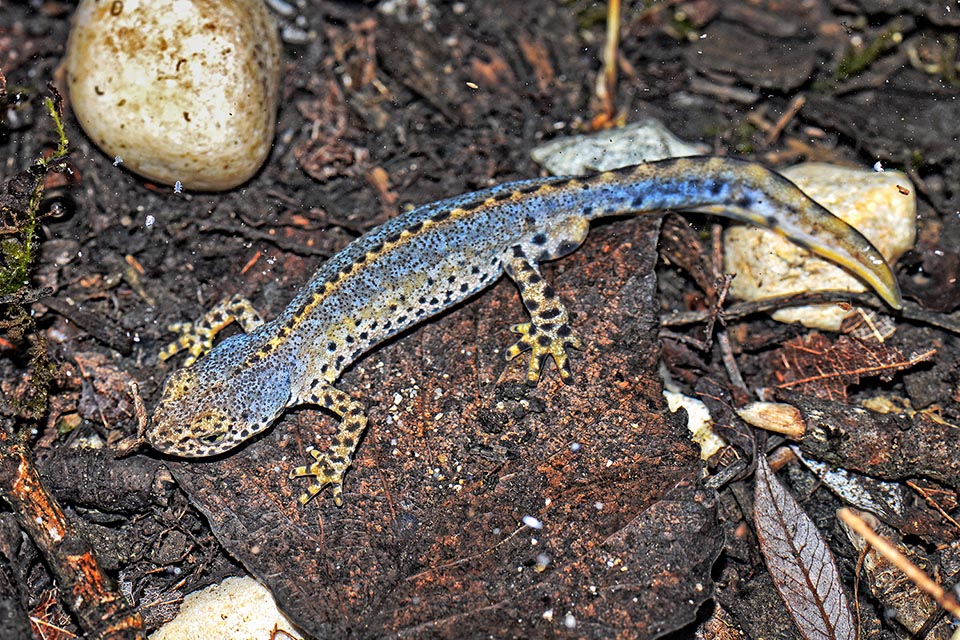 A male with its characteristic dorsal crest. The females, bigger, reach the 120 mm with a faded livery, greenish or beige-brown up to black © Alexandre Roux

To get through the winter, it often happens that it aggregates in large groups inside grottoes. Other useful shelters are rocks, trunks and roots. The diet differentiates depending if they are in the aquatic or in the terrestrial phase.

During the aquatic phase, these newts prey mainly on small mollusks, aquatic insects, annelids and other invertebrates, but have been frequently also reported predations on eggs and larvae of other amphibians. Conversely, during the terrestrial phase the diet of the adults of Ichthyosaura alpestris includes various arthropods, earthworms and snails. 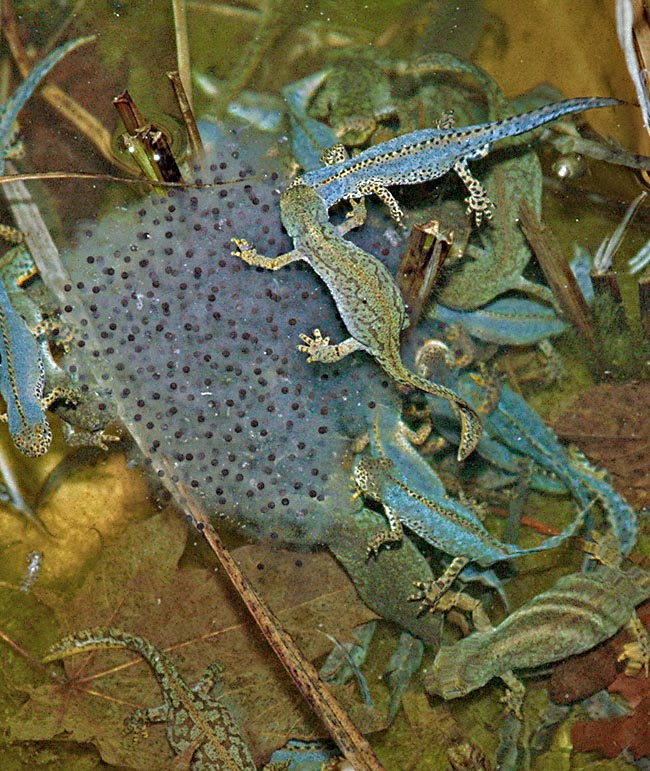 Ichthyosaura alpestris is an amphibian of modest size. Averagely, it can measure from a minimum of 70 mm to a maximum of 120. The females are bigger, with 100-120 mm, whilst the males reach just 80-90 mm.

Like other salamanders, this species presents short legs and long tail, but distinguishes for the lateral compression of the last one.

During the aquatic phase, the skin is glossy and wet, whilst in the terrestrial it appears more silky and grainy. The Alpine newt displays different liveries depending on the sex, the period or phase and on the environment where it lives.

During the mating season the males display a small yellowish dorsal crest, strewn with black specks. This crest stands out because the back spans a range of colours going from the pale blue to the most intense blue.

The sizes of the body show a splendid marbled blue colour, along which can be observed a white-silvery band with black small spots and a turquoise band. The colour of the sides creates a dramatic contrast with the bright orange belly.

Unlike the gaudy livery of the males, the females display lore modest colours. They do not have the dorsal crest, distinctive character of the adult males. It is absent the turquoise band as well as the bluish colouration of the mantle that appears opaquer. It goes from greenish to beige and from brown to black. The very bright ventral colouration is present on the males and also on the females. This is because it is not a sexual character but is a defensive mechanism. Like other Amphibians, Ichthyosaura alpestris when threatened tends to display its aposematic colouration, thus signalling its predator its toxicity.

During its terrestrial phase the colours may appear darker, and this due to the lower humidity of the skin that gets more grainy. The populations living at very high altitudes have darker hues and display a greater longevity, up to 22 years. 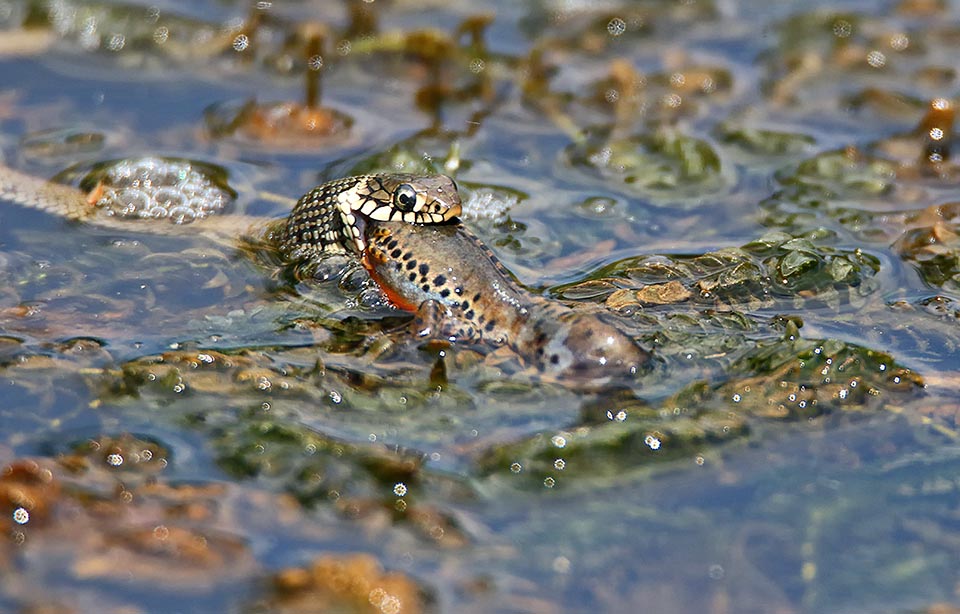 The Alpine newt is an oviparous species. In Central Europe its reproductive period goes from February to June. During the mating time the males as well as the females are located in the water.

The “female choice” is induced by various behaviours of the male, such as courting dances, very bright colours and stimuli of various types, from mechanical to visual up to the chemical ones, like the release of pheromones from the cloaca. 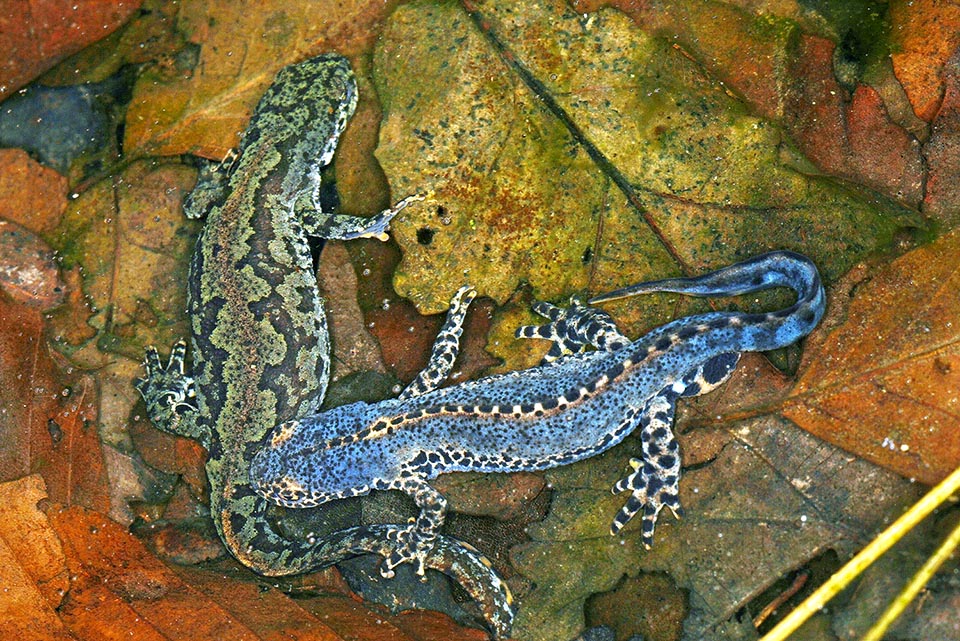 After courting ritual the male, right, releases one spermatophore on the bottom. A valuable gift for the female who collects it and inserts into the cloaca © Christian Hugues

Once concluded this particular courtship ritual, the mele releases a spermatophore on the bottom that is collected by the female and inserted into the cloaca.

By the end of the reproductive season, a female may have laid about 250 eggs, wrapped individually, with the utilization of the hind legs, on the leaves of the water plants. The embryonic development depends a lot on the temperatures of the water, but usually lasts 2 to 3 weeks. 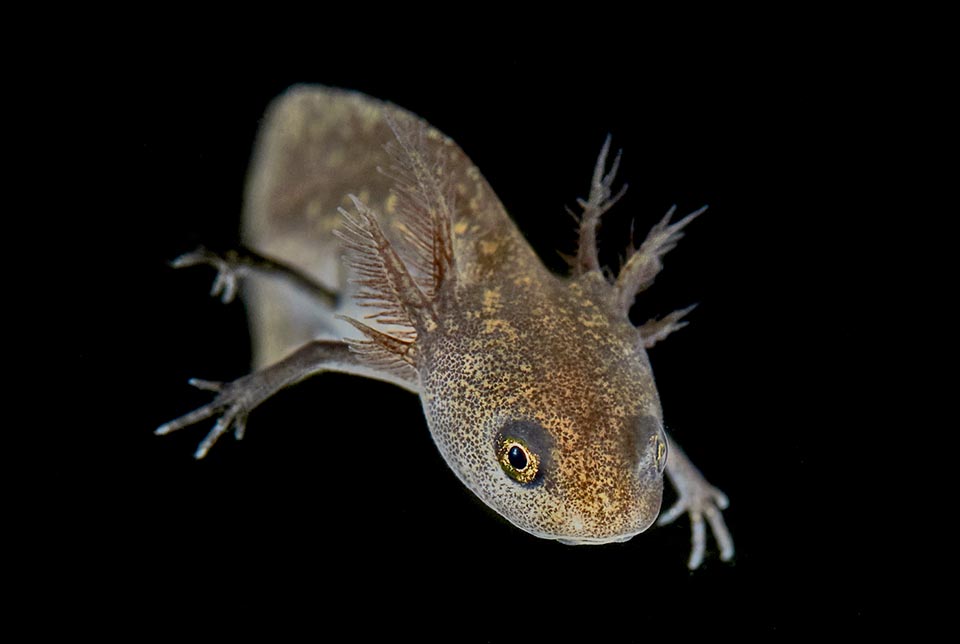 Ichthyosaura alpestris larva. Development usually occurs in few months, but in altitude or where food is scarce more seasons are necessary for the metamorphosis © Davide Lopresti

The larval development usually occurs after a few months but have been observed several instances where the larvae spend one or more seasons in the water and are considered as “giant larvae”. The larvae of this species are totally aquatic and consequently present well-developed gills.

In this species is also frequent the phenomenon of the neoteny or pedomorphosis. The neotenic individuals present adult characteristics, such as the well-developed gonads, but also characteristics of the juvenile stage, like the gills. In the case of Ichthyosaura alpestris it is an optional neoteny, seen that only some individuals do not complete the metamorphosis. 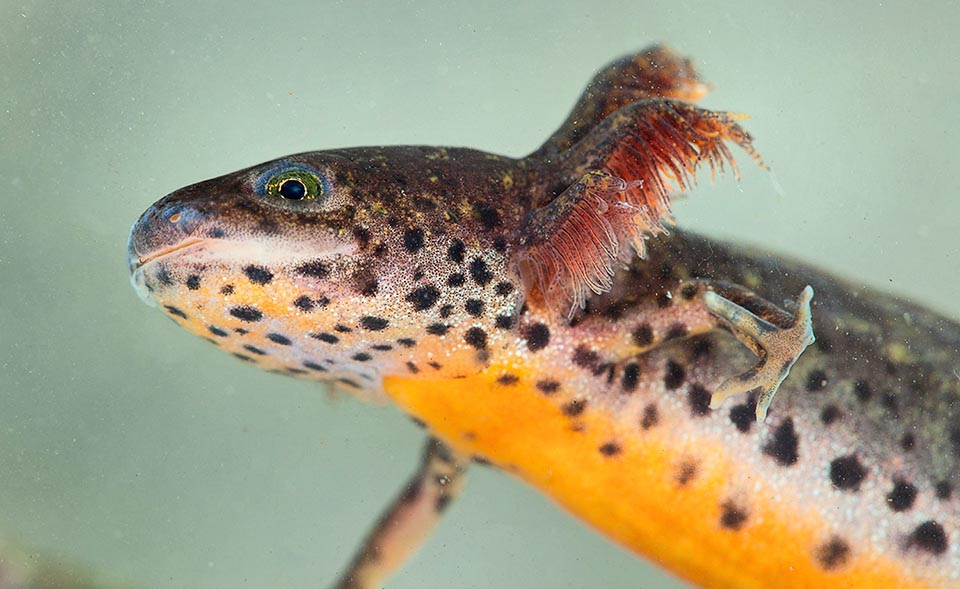 However, the pedomorphosis may be also mandatory, like for the Proteus (Proteus anguinus Laurenti, 1768) who does not have the capacity of metamorphosis, or almost mandatory, as for Axolotl [Ambystoma mexicanum (Shaw, 1789)] where the phenomenon is decidedly more diffused than in the Alpine newt.

Ichthyosaura alpestris can have one or more terrestrial phases, all alternated with reproductive aquatic phases. The hibernation usually begins in September and lasts up to February but depends a lot on the altitude where the populations live.