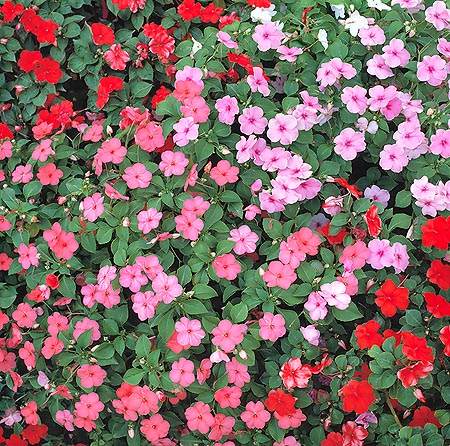 The Impatiens walleriana is native to tropical Africa © Giuseppe Mazza

The Impatiens walleriana Hook. f. (1868) is native to tropical Africa (Kenya, Malawi, Mozambique, Tanzania and Zimbabwe), where it grows in the coastal forests and along the river banks in humid and shady zones.

The name of the genus is the Latin word “impatiens” = impatient, with reference to the capsules which suddenly open ejecting around the seeds; the species is honoured to the British missionary Horace Waller (1833-1896).

Perennial herbaceous with more or less ramified, succulent, stems, lignifying at the base and translucent in the young parts, tall up to70 cm, with elliptic-ovate leaves with sharp apex, 4-12 cm long and 2-5 cm broad, of green colour, at times with bronze gradations, and serrate margins. The flowers, with a diameter of 4-5 cm, on 2-6 cm long petioles provided with 1-2, seldom more, nectariferous glands, usually assembled, in pairs, in axillar or terminal racemes, have the lower sepal prolonging into a typical, 2,5-4 cm long spur and five obovate, extended, petals, of colour varying from white to all shades of pink and red.

The fruits are fusiform, greenish, 15-20 mm long, capsules which open suddenly, throwing, far away from the mother plant, small pear-shaped seeds, long just less than 2 mm, of a rusty or blackish colour. 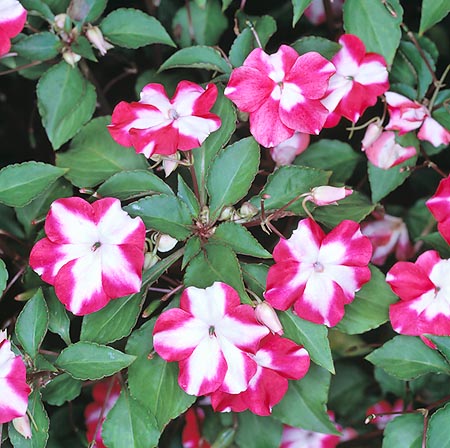 The Impatiens walleriana has an almost continuous flowering © G. Mazza

It easily reproduces by cutting and by seed, which is to be interred superficially on very draining and rich of organic substance, substrata, at the temperature of 20-24°C; the germination usually takes place in one, two weeks.

Very popular plant in the tropical and humid subtropical zones – where, often, has avoided the cultivation by naturalizing – thanks to its abundant blossoming almost continuous and to its lively colours, result also of a long varietal selection and of crossings, and is popular also elsewhere as it can be easily cultivated as annual with a blossoming lasting from early summer to the first cold weather.

The plant needs shaded or semi-shaded situations, which enlivens with its colours, other characteristics which contributes to its popularity, and soils rich of organic substance, well drained, kept humid and with tendency to acidity. It is easily cultivated also in pot for indoor decoration at temperatures of 20-22 °C, temperatures lower than 14/16 °C cause the fall of the leaves and deadly rottenness if the substratum remains humid; watering must be abundant during the vegetative period and reduced in winter.

→ To appreciate the biodiversity within the BALSAMINACEAE family please click here.