The species is native to China (Anhui, Fujian, Guangdong, Guangxi, Guizhou, Henan, Hubei, Hunan, Jiangsu, Jiangxi and Zhejiang), Korea and Japan where it grows in the forests and in the thickets close to river streams, up to about 1800 m of altitude.

The Indigofera decora Lindl. (1846) is a deciduous shrub with erect posture, low and expanded, very ramified, 0,4-1 m tall, that tends to spread through root suckers; the radical apparatus is able to fix the atmospheric nitrogen enriching the soil of the same. 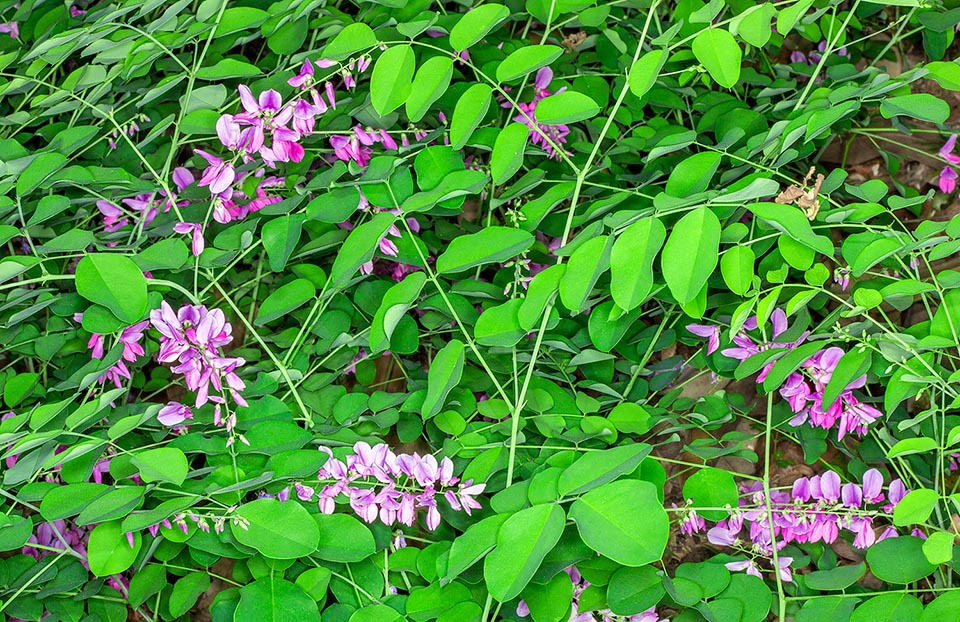 Native to China, Korea and Japan, the Indigofera decora is a deciduous shrub, low and expanded, very ramified, 0,4-1 m tall, that tends to diffuse through root suckers © Giuseppe Mazza

The leaves are composite, imparipinnate, 8-25 cm long, with 5-23 opposite or alternate leaflets in the lower part, sub-sessile, oblong-ovate or oblong-lanceolate with acuminate apex, obtuse or mucronate and entire margin, 2-6 cm long and 1,2-3 cm broad, of dark green colour, below thickly covered by white medifixed (T-shaped) hairs (thricomes), above glabrous or hairy; petiole,1-2,5 cm long, and glabrous or covered by medifixed hairs rachis. 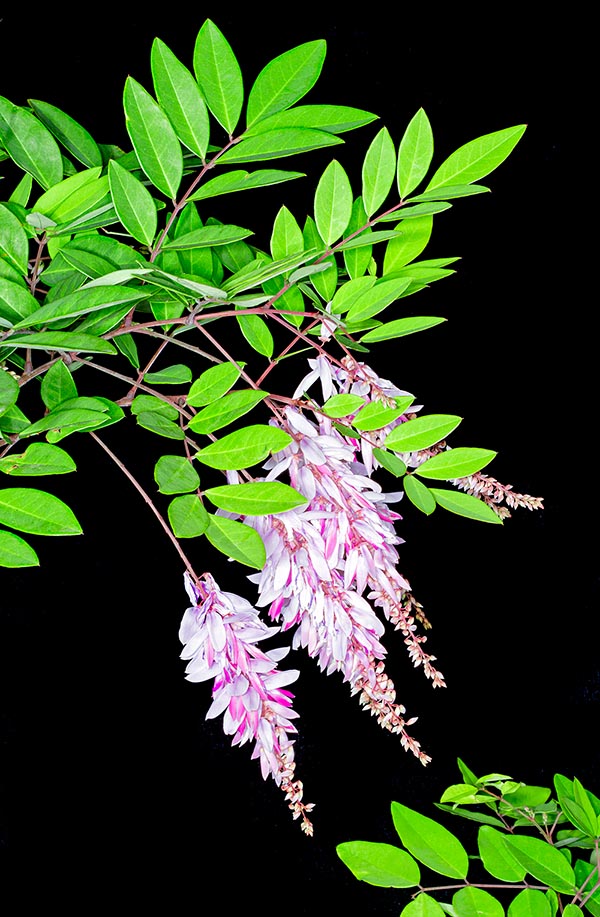 The fruit is a cylindrical legume, 2,5-7 cm long, of brown colour when mature, containing 5-10 ellipsoid seeds about 4 mm long.

China (Hubei). Leaves with 5-9 leaflets covered on both sides by medifixed hairs;

China (Fujian, Jiangxi and Zhejiang). Leaves with 13-23 leaflets covered on both sides by medifixed hairs;

Leaves with 13-19 leaflets glabrous above, covered by medifixed hairs below;

Leaves with 9-13 leaflets covered on both sides by medifixed hairs.

It reproduces by seed, previously kept in water for one day, in draining loam maintained humid at the temperature of 22-25 °C, by semi-woody cutting in summer and through root suckers.

Very ornamental shrub with abundant blooming in summer that may sporadically repeat in autumn, cultivable as isolated specimen, in mass or for borders in the subtropical and humid temperate climate regions where it can stand temperatures up to -10 °C, or little less with damage to the aerial part, but re-vegetating quickly in spring and blooming in summer.

It requires full sun or a slight shade and adapts to several types of soil, provided well drained, slightly acidic to alkaline, maintained humid, even if well rooted it may stand short dry periods. As the blooming takes place on the new vegetation, a pruning is useful, even drastic, by late winter-early spring in order to stimulate the emission of new branches.

Indigofera decora was last modified: May 23rd, 2019 by Peppino