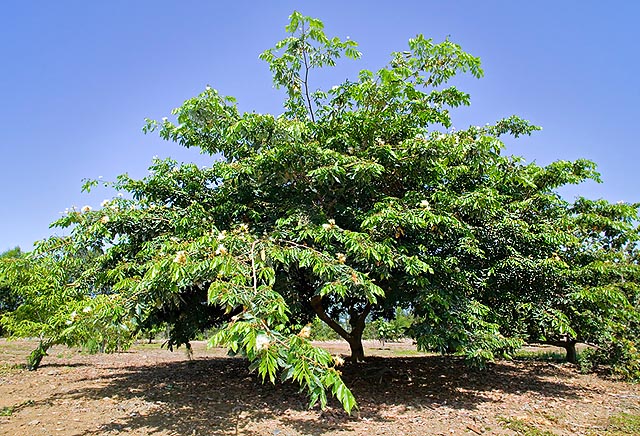 This species is native to tropical South America (Bolivia, Brazil, Colombia, Ecuador, French Guiana, Guyana, Peru, Surinam and Venezuela), where it grows mainly along the banks of the rivers up to about 1600 m of altitude.

The name of the genus is the one utilized by the natives.

The name of the species is the Latin word “edulis” = edible, comestible, with obvious reference to the fruits.

The Inga edulis Mart. (1837) is an evergreen fast-growing tree, tall up to about 25 m, with an enlarged crown rather flattened and an often twisted trunk, of about 30 cm of diameter, with a greyish bark. 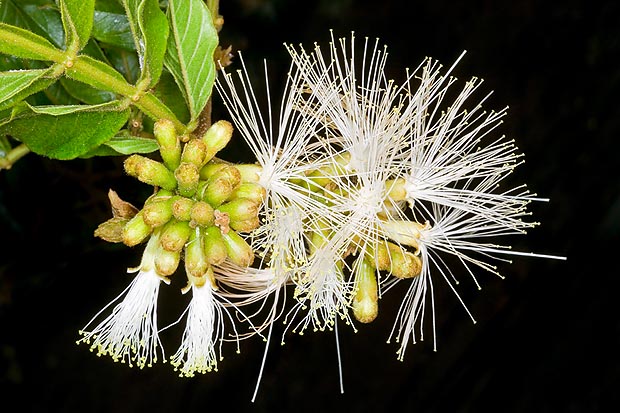 The leaves are alternate, paripinnate with winged rachis, 10-25 cm long, with 4-6 pairs of ovate leaflets with acuminate apex, sessile, of intense green colour on the upper page, pubescent below, with increasing dimensions, being the terminal ones up to about 16 cm long and 8 cm broad.

Nectariferous glands are present between the pairs of leaflets.

The terminal inflorescences are formed by thick, 8-12 cm long, racemes with a 1,5-2,5 cm long tubular corolla, with five lobes, and several protruding stamina, about 4 cm long, which wither quickly.

The fruits are cylindrical pods, deeply streaked, even more than 1 m long, of 3-5 cm of diameter, containing numerous blackish, 3,5 x 1,2 cm, seeds surrounded by a white cottony aril with a sweet taste.

It easily reproduces by seed which has a short-lasting germination capacity, about two weeks; the germination takes place in two, three days, at times in the pod itself.

The fructification may begin, in the best conditions of cultivation, by the second year after the sowing. 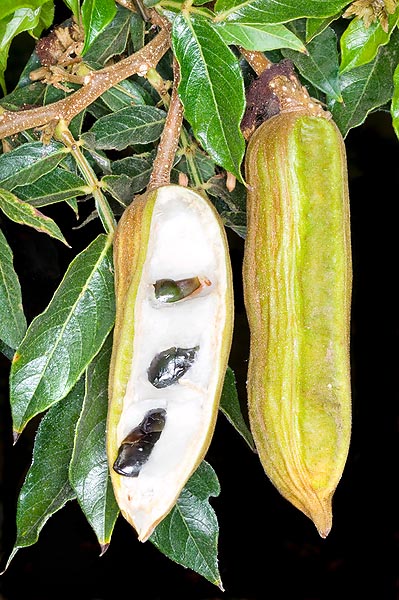 It is a species locally cultivated for its fruits, but, more frequently, as shade tree for the coffee and cocoa plantations.

It has also a fairly good ornamental value due to its expanded and rather thick crown.

In order to grow better, it requires full sun and tropical and humid subtropical with heavy rainfalls climates, but it adapts also to seasonal climates, with three, four months of dryness.

Its cultivation may be tried in the warm temperate climates, as it can bear, for a short time, temperatures down to about -4 °C, even if with damage to the aerial part.

It adapts to different types of soil, even strongly acidic, and, being capable, as the other leguminous plants, to fix the atmospheric nitrogen enriching the soil and thus contributing to its fertility; furthermore, the deep and robust rooting apparatus helps in preventing the erosion along the slopes of the coffee plantations.

The pulp surrounding the seed, sweet and with a vanilla taste, is consumed as fresh, but from it they can get a juice at times utilized for preparing an alcoholic drink.

The seeds, consumed cooked as vegetables or roasted, are much popular in the origin countries. The leaves and the seeds, with their high contents in proteins, are also utilized as forage for the livestock.

Locally, its wood is used as combustible and as building material.

Finally, the seeds and the leaves are utilized in the traditional medicine as astringents in the intestinal diseases and as antirheumatics.