The species is native to Australia (Queensland), Cambodia, Fiji, India, Indonesia, Madagascar, Malaysia, Micronesia, Myanmar, New Caledonia, Palau, Papua New Guinea, Philippines, Samoa, Seychelles, Taiwan, Tanzania (Zanzibar), Thailand and Vietnam where it grows in the forests on calcareous soils mainly along the coasts at the borders of the mangroves or along the banks of water streams.

The generic name comes from a local Indian name; the specific name is the Latin adjective “bijugus, a, um” = with two horses, biga, with reference to the pennate leaves with two pairs of leaflets.

The Intsia bijuga (Colebr.) Kuntze (1891) is an evergreen or semi-deciduous tree, in the climates with dry season, usually 10-25 m tall, but that in the oldest specimens in nature may reach the 40 m, with erect trunk with smooth greyish bark and tabular roots at the base (roots similar to buttresses contributing to the support of big trees); the rooting apparatus is able to fix the atmospheric nitrogen enriching of it the soil. The leaves, on a 1-2 cm long petiole, are alternate, paripinnate, with two, rarely three, couples of ovate to elliptic leaflets, asymmetric with respect to the central rib, with rounded apex and entire margin, 6-14 cm long and 4-8 cm broad, of glossy intense green colour.

Terminal panicle inflorescences, 10-16 cm long, bearing fragrant bisessual flowers with calyx formed by 4 ovate sepals, 0,5-1,5 cm long and 0,5 cm broad, concave, of greenish colour, corolla formed by only one unguiculate petal (with long narrow base similar to a stem), 1-3 cm long, with oval lamina with wavy margins, of white colour shaded of pink or purple at the base, 3 fertile stamina, about 4 cm long, 5-7 purple staminodes, about 1 cm long, and 4 cm long style. The fruit is an oblong dehiscent legume, compressed, 7-25 cm long and 2-6 cm broad, containing up to 6 blackish seeds, more or less oblong, 2-3,5 cm long and 1-3 cm broad. 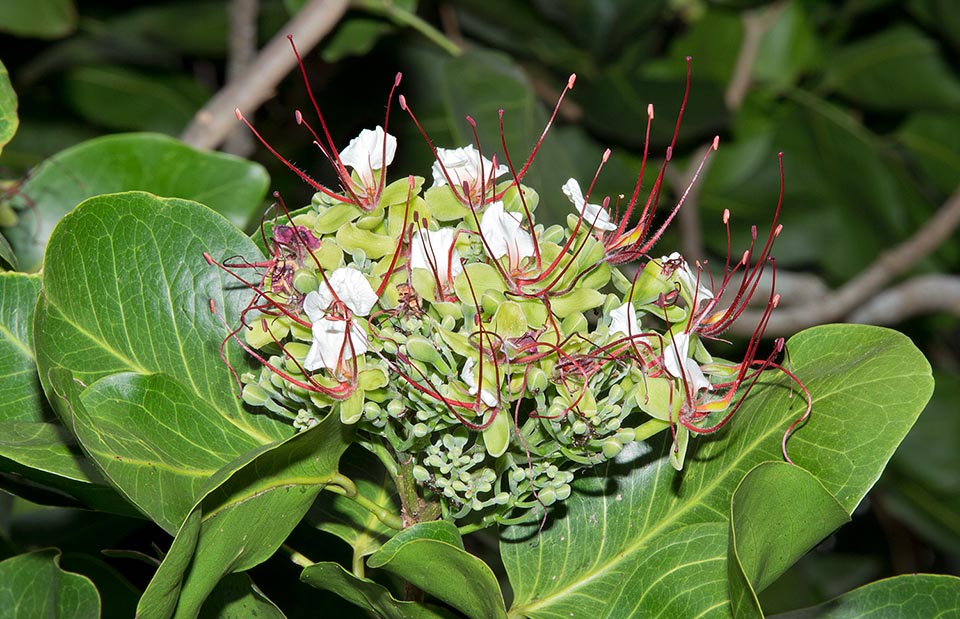 Present from Tanzania to beyond Australia, near mangroves and along water streams, Intsia bijuga is a massive 10-25 m tall tree. 10-16 cm terminal panicle inflorescences with greenish sepals, only one almost white petal and showy purple staminodes. Due to the prized wood the species is now considered vulnerable © Giuseppe Mazza

It reproduces by seed, previously scarified and kept in water for 2-3 days, in loam with addition of sand or perlite per a 30%, maintained humid at the temperature of 25-27 °C; the fresh seeds germinate in 1-2 weeks.

Massive tree of relatively fast growth, in the best cultivation conditions, suitable exclusively to the tropical and humid subtropical climate zones, preferably in full sun. It grows in a vast variety of soils, even sandy and stony, poor at times, and sometimes on calcareous outcrops almost without humus, thanks to the roots capable to fix the atmospheric nitrogen; it stands drought periods as well as periodical floodings, even brackish.

Mainly appreciated for the excellent wood, of orange yellow to reddish brown colour, dense, up to more than 900 kg/m3, lasting, with high mechanical characteristics, limited shrinkage in time and resistance to the xylophagous insects and to the bad weather, utilized for heavy carpentry, in the civil and naval constructions, for prized furniture, wood carvings and handicrafts; in past was used by the populations of the Pacific islands for constructing canoes and pirogues. Moreover, it is utilized in the reforestation programmes for the consolidation of soils and control of the erosion, as windbreak and as shade tree in parks and gardens due to its thick foliage and the ornamental blooming; the bark and the leaves have a limited use in the traditional medicine of some populations.

Due to the overexploitation that has rarefied its presence in some of the origin areas, it has been inserted in the red list of the IUCN (International Union for the Conservation of Nature) as “vulnerable” (at risk of extinction in the wild).