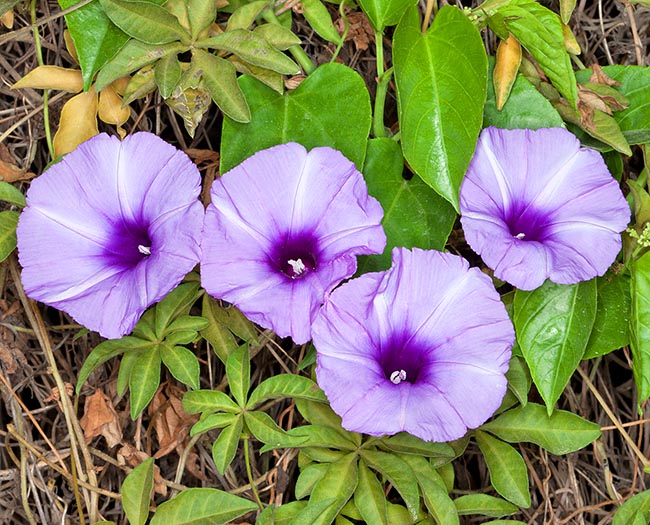 Ipomoea cairica is an African and Asian climber with even 5 m long, lignifying at the base, stems. Fast growth, copious blooming at the tropics and medicinal virtues. Edible starch is gotten from the roots © Giuseppe Mazza

The name of the genus is the combination of the Greek terms “ιψ” (ips) = worm and “ὁμοιος” (omoios) = similar, with reference to the voluble stems; the name of the species is the Latin adjective “cairicus, a, um” = of Cairo.

The Ipomoea cairica (L.) Sweet (1826) is an evergreen, perennial climbing or creeping species with tuberous roots and twining stems, up to 5 m long, which with the time tend to lignify at the base, rooting at the nodes. The leaves, on a 2-7 cm long petiole, are alternate, palmate, 4-9 cm long, deeply incised up to almost the base in 5 ovate-lanceolate to elliptic lobes with entire or slightly wavy margin and mucronate apex, with the two basal pairs often lobate in their turn, and median lobe 4-5 cm long and 2-2,5 cm broad. Axillar inflorescences, on 2-8 cm long peduncle, carrying one or more hermaphroditic flowers merged in cymes, on 0,5-2 cm long pedicel, with ovate, about 0,5 cm long sepals, pink, purple or reddish purple, rarely white, funnel-shaped corolla, with dark violaceous purple centre, 4-6 cm long and of 5-7 cm of diameter. The fruits are sub-globose capsules, about 1 cm long, with 2 cells and 4 valves containing 4 seeds (one per valve), ovoid slightly flattened, tomentose, dark brown to black, about 0,5 cm long, with margins equipped with long sericious hairs. It easily propagates, so much to have naturalized in various tropical and subtropical areas behaving as a weed, covering vast areas and suffocating the native vegetation.

It propagates by seed, previously scarified and maintained in water for two days, in sandy loam maintained humid at the temperature of 22-24 °C, with germination times of 1-3 weeks; moreover, it reproduces also by ground layering and cuttings.

Vigorous and fast growing species with copious blooming continuing for most of the year, cultivable on the tropical, subtropical climate regions and in the warm temperate ones where it may resist to values of temperature up to about -4 °C, provided these are exceptional and short lasting, with loss of the aerial part, elsewhere can be cultivated as annual. It requires full sun and is not particular about the soil, even poor, rocky or stony; is particularly suitable for quickly covering fences, escarpments or used as ground cover, it is however to be kept in mind in its collocation that it is a potentially weed species.

The starch extracted from the roots was consumed cooked in southern China and in Polynesia during famine periods; all parts of the plant are variously used in the traditional medicine of the various populations.