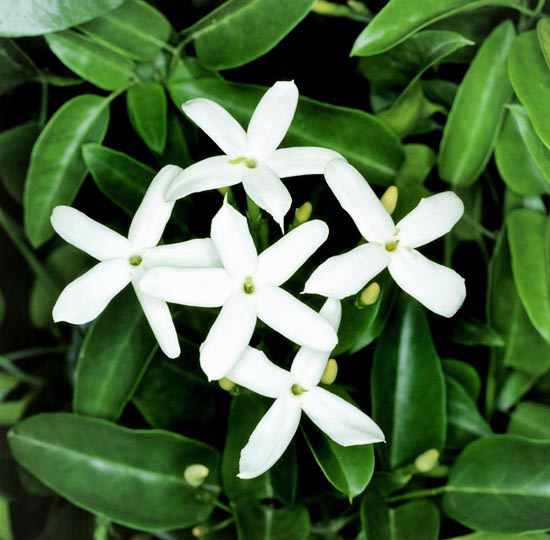 This species is native to the Madeira Island (Portugal), where it grows on the walls of the gullies between the 900 and the 1200 m of altitude in very few specimens.

The name of the genus is thought to be coming from the Persian “yasmīn”; the Latin name of the species, “azoricum” = of the Azores, refers to the presumed site of origin.

The Jasminum azoricum L. (1753) is an evergreen, sarmentose, shrub, much ramified with pendulous branches, long up to more than three metres. The leaves are opposite, trifoliate, with ovate leaflets, rather coriaceous, glossy dark green, with wavy margin and pointed apex, the terminal one being bigger than the lateral ones, 4-8 cm long and 2-4 cm broad. The inflorescences are in axillar and terminal cymes, carrying numerous flowers, gently scented, with 2-2,5 cm long calyx, equipped with 4-5 triangular, 1 mm long, teeth, white corolla with 1-1,5 cm long tube and 4-5 oblong lobes, pointed at the apex, 1-1,5 cm long and 0,5 cm broad. The fruit is a globose blackish berry of about 1 cm of diameter.

It reproduces by seed, semi-woody cutting in summer, air layering and offshoot. It is a vigorous climber, particularly suitable for subtropical and temperate climate zones, where it can resist to temperatures as low as -6 °C, or little less if well sheltered, with a long flowering, from early summer to autumn, which may flower again sporadically also in winter in the milder climates. It needs full sun and is not particular about the soil, provided the same is draining; the waterings are to be regular in summer, but allowing the superficial layer of the soil to dry up before irrigating again, more spaced, if necessary, in winter.

It may be utilized as climber on gratings, pillars or suitably fixed to a wall, but also as bush with the pendulous branches; it tolerates well the prunings, even if drastic, for containing its vegetation, and has a good resistance to the saltiness and therefore may be employed close to the sea. Where the climate does not allow the permanent cultivation in open air, it can be cultivated in pot, utilizing a substratum formed by clayey earth, peat and coarse sand, or, in place, by agriperlite, in equal parts, for being sheltered in greenhouse or in apartment during the coldest months.

It is to be placed in a location where it may get some hours of sun per day, like a window facing south, and in such case it is possible to have some flowering also in winter, fertilize on a monthly basis with a hydrosoluble product, at half dosage in respect of that advised on the package.

Jasminum azoricum was last modified: May 1st, 2018 by Giuseppe Mazza